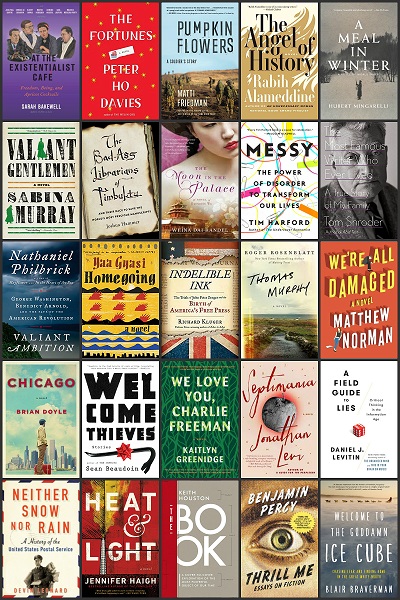 At the Existentialist Café: Freedom, Being, and Apricot Cocktails by Sarah Bakewell (Other Press). “While there’s no substitute for reading the existentialists in their own words, Bakewell’s account is tremendously moving and interwoven, an intellectual project that’s wide enough in scope to make readers think differently about the entire 20th century.”

Thomas Murphy: A Novel by Roger Rosenblatt (Ecco). “You’ll find no scorching plotlines in Thomas Murphy, no sampler-worthy feel-goodisms…and no stunning denouements. Instead, what you get is a genuinely funny, likeable protagonist who parries with the Fates, his neighbors, and his no-good landlord while wryly taking measure of the world both real and imagined around him. Murph knows mortality always wins in the end, but there’s no reason you can’t kick it in the balls before the buzzer.”

A Meal in Winter: A Novel of World War II by Hubert Mingarelli; translated by Sam Taylor (The New Press). “Nothing in this work is inessential — it doesn’t even have chapter numbers or headings, just eloquent blank spaces. In its silences, in its simplicity, in its depth of feeling communicated with restraint and meticulous delicacy, A Meal in Winter delivers everything it promises.”

Chicago: A Novel by Brian Doyle (Thomas Dunne Books). “The tone is amiable, meandering, piquant with local color and unforgettable characters who appear briefly, never to be seen again. The paragraphs, even those of one sentence that go on for 20 lines, have a poetic lilt and rhythm with an undeniable musical sway. They reminded me of the narrator’s discursion on the nature of the blues as a musical form — so intrinsically human that it seemed I was feeling them rather than reading them. In short, Brian Doyle’s Chicago, despite breaking all the rules in the fictionist’s handbook, works. It is certainly the best book I’ve read this year.”

A Field Guide to Lies: Critical Thinking in the Information Age by Daniel J. Levitin (Dutton). “Don’t let Levitin’s academic background put you off. In addition to A Field Guide to Lies, he has written three international bestsellers: The Organized Mind, This is Your Brain on Music, and The World in Six Songs. His style is conversational and often funny. (As an example of how averages aren’t always useful, he points out that ‘on average, humans have one testicle.’)”

Septimania: A Novel by Jonathan Levi (The Overlook Press). “To say Jonathan Levi’s second novel, Septimania, is absurdly erudite, overly ambitious, or just plain pretentious would be correct. It would also, however, miss the den of brilliant and emotionally rich fun the book has to offer.”

Pumpkinflowers: A Soldier’s Story by Matti Friedman (Algonquin Books). “He recounts the plight of all soldiers in combat everywhere, long periods of boredom when nothing happens, punctuated by hours of terror, when carnage is king. He tells of mediocre television shows from Israel, books passed from one soldier to another, video cassettes, a guitar. But Friedman used his time keeping watch from the trenches, greasing guns, and filling ammunition crates. And as he makes clear without ever saying it, a soldier loves the man fighting next to him and will give his life to save his buddy.”

Messy: The Power of Disorder to Transform Our Lives by Tim Harford (Riverhead Books). “The big theme of this book is, in fact, not messiness but diversity. Harford argues that if we try to be too neat, ordered, organized, we can end up with unhealthy, un-resilient, one-dimensional forests, cities, workplaces, playgrounds, as well as plane crashes (2009’s Air France Flight 447 disaster, in the ‘Automation’ chapter) and too much trust in online dating algorithms. And we suffer more boring, less interesting lives.”

Indelible Ink: The Trials of John Peter Zenger and the Birth of America’s Free Press by Richard Kluger (W.W. Norton & Company). “The doctrine of seditious libel survived as a lurking threat to freedom of the press until the Supreme Court effectively laid it to rest in 1964 with the landmark decision in New York Times v. Sullivan limiting libel suits by public officials. Kluger concludes by highlighting a new threat to press freedom: the prosecution or attempted prosecution of whistleblowers from within the newly emerging national security state, such as the now-imprisoned Chelsea Manning or the in-exile Edward Snowden.”

Welcome Thieves: Stories by Sean Beaudoin (Algonquin Books). “Beaudoin’s characters are distinct and fascinating, recognizable yet original. A traveling performer who stumbles into a cursed stage production and finds himself in an even stranger relationship. A naked man who won’t leave his apartment floor. How these vastly different characters can exist so seamlessly within a single collection is beyond me, but it makes for some stellar material.”

The Book: A Cover-to-Cover Exploration of the Most Powerful Object of Our Time by Keith Houston (W.W. Norton & Company). “It’s clear that the meteoric rise of e-readers drove this project forward, since The Book itself doesn’t provide new or revelatory information. It doesn’t need to, though; it just needs to collect readers who understand the sensual and emotional dimensions tied up in this oh-so-physical object.”

Homegoing: A Novel by Yaa Gyasi (Knopf). “Through these varied yet intertwined viewpoints, Gyasi explores the deep territory of colonialism, slavery, discrimination, corruption, identity, and homecoming. She approaches tough topics with unflinching honesty. Her description of the horrific conditions in the castle’s dungeon, for instance, is explicit, yet her language shows remarkable restraint. She gives it to us straight, and therefore we are enlightened without feeling manipulated."

The Moon in the Palace: A Novel of Empress Wu by Weina Dai Randel (Sourcebooks Landmark). “The real triumph of The Moon in the Palace is how Randel succeeds in showing court politics exclusively through female eyes, and how every decision and subsequent action, success, and failure are skillfully plotted like a chess match by the palace women. These are unique characters with life-and-death ambitions, and each is motivated to strategize by any means available — trickery, betrayal, or friendship — to become that much nearer to the emperor and, ultimately, the next mistress of China. Magical.”

We Love You, Charlie Freeman: A Novel by Kaitlyn Greenidge (Algonquin). “The author’s skill lies in not letting her vibrant descriptions slow the pacing of the novel. She starts with a light, refreshing tone; and pages of delightful, breezy prose melt away under our hands as she coaxes us into increasingly dark and uncomfortable territory.”

We’re All Damaged: A Novel by Matthew Norman (Little A). “Matthew Norman has written a funny, likable novel with a funny, likable protagonist — someone you’ll root for even as you cringe at the things he does. (Let those among us who’ve never flung an ice-cream float at our ex’s house in the middle of the night cast the first stone.) Surprisingly poignant in places, We’re All Damaged is a perfect summertime (or anytime) read: the story of a thirtysomething Everyman who never quite gives up on his better angels in spite of the universe conspiring to make him do otherwise.”

Neither Snow nor Rain: A History of the United States Postal Service by Devin Leonard (Grove Press). “The history of how messages and packages were conveyed is vast. Whether measured by the ebb and flow of delivery volumes, the number of post offices built, or the magnitude of political intrigues, Leonard presents his material in a way that is both captivating and thoughtful about how the USPS contributed to American culture.”

Valiant Gentlemen: A Novel by Sabina Murray (Grove Press). “Valiant Gentlemen is a book to be savored slowly. Called (on Murray’s website) a meditation on colonialism, it is so much more: a leisurely, penetrating rumination on loving relationships, on loyalty, on the meaning of valor, on betrayal, on the nature of civilization, and on the excruciating fun of storytelling itself.”

The Fortunes: A Novel by Peter Ho Davies (Houghton Mifflin Harcourt). “The Fortunes is an extremely detailed guide through not just the history of the Chinese in America, but the stereotypes, legends, cultural markers, and idioms that permeate our society, from the term Mongolism to describe Down syndrome (‘as if what was wrong were an excess of Chineseness’) to that pernicious question, ‘Where are you from?’ that bedevils Asian-Americans everywhere.”

Thrill Me: Essays on Fiction by Benjamin Percy (Graywolf Press). “Thrill Me turns the interior, plodding process of writing into a heart-pounding read, and imparts some excellent lessons along the way. Though Percy isn’t the first to advocate taking the best of both the literary and genre worlds, he is an eloquent spokesman.”

The Angel of History: A Novel by Rabih Alameddine (Atlantic Monthly Press). “So, reader, settle down with Satan, if you dare. You are invited to listen in on Satan’s fireside chats with Death and the 14 Saints. It’s a cozy scene and setting, the details all matter in the multitude of unfolding stories that follow; but don’t worry, just enjoy. The author will let you know that the voices you think you hear are real: bits from Milton, Dante, and Donne, the Bible, and the Quran. All you can do is trust the omniscience of the narrator and the author’s greater design.”

Heat & Light: A Novel by Jennifer Haigh (Ecco). “Haigh’s story is so even-handed that you will come away with sympathy for both the buyers and the sellers, and with real compassion for those who struggle with the technology that has invaded and in some cases, transformed their lives. Give this book a chance. You won’t be sorry.”

Valiant Ambition: George Washington, Benedict Arnold, and the Fate of the American Revolution by Nathaniel Philbrick (Viking). "If readers are looking for an intense, well-written, dramatic story with stirring battle scenes, then Valiant Ambition is a must-read. But at its heart is a complex and pathetic figure tinged with a sad lack of remorse."

The Bad-Ass Librarians of Timbuktu: And Their Race to Save the World’s Most Precious Manuscripts by Joshua Hammer (Simon & Schuster). "Thus began a silent movement, first to hide, then to sneak out of Timbuktu, the hundreds of thousands of manuscripts Haidara and his colleagues had so carefully gathered and preserved. In a 90-day period, Haidara and his co-conspirators evacuated 270,000 of the 377,000 manuscripts, mostly to Bamako, the capital of Mali. In complete secrecy, they moved their contraband by car and on foot. More than once, they were halted by jihadi police or Malian army troops, but no manuscripts were confiscated or destroyed."

The Most Famous Writer Who Ever Lived: A True Story of My Family by Tom Shroder (Blue Rider Press). “Shroder weaves together a fascinating portrait through the use of family lore, boots-on-the-ground investigative journalism, dusty research, and a solid dose of flesh-and-blood familial feeling for his subject and those closest to him.”

Did we leave out your fave titles of the year? Tell us about it in the comments section below!

You want to find a book to read, but who has 30 seconds to peruse those back-of-the-cover blurbs? Not you! You need a synopsis now, this minute, preferably yesterday. Well, here you are: four-word descriptions of a few great titles. Go!