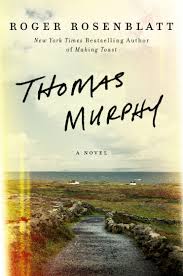 "The park is gray and I am blue, thinking about how long it takes to live a life, and what do you wind up with? Age. People say it’s unseemly to feel sorry for yourself, but I enjoy feeling sorry for myself. Who else would feel sorry for me?"

So ponders poet Thomas “Murph” Murphy in one of the countless rhetorical ramblings that populate Roger Rosenblatt’s disarming Thomas Murphy. The beauty of this novella-slash-character-study-slash-longform-philosophical-musing is that Murph doesn’t really care if you feel sorry for him; he cares that he can make you squirm.

But just a little.

See, under his crotchety exterior, Irish expat Murph is a good guy. Sure he’ll needle into your doubts about God, but then he’ll buy you a slug of Jameson’s to help wash the uncertainty down.

Murph’s own worldview is fairly certain: Life is a long series of struggles and suffering, but at least you get to die at the end. That’s what happened to his wife, Oona, and best friend, Greenberg, both gone in the space of a year.

With his intelligence and wit, Murph is similar to Louis, the circumspect widower in Kent Haruf’s wonderful final novel, Ours Souls at Night. Yet whereas Haruf’s Louis offers spare, resonant insights, Rosenblatt’s Murph glories in full-on Joycean reveries and reminiscences. (Both men would make excellent drinking buddies, but the smart money would be on Louis to get you home by curfew.)

Left with his beloved adult daughter and worthy foil, Máire, and her young son, William, 72-year-old Murph is facing a possible Alzheimer’s diagnosis, eviction from his rent-controlled apartment, and an existential choice of sorts: fling himself headlong into the world of dementia, or keep writing poems, walking in Central Park with his grandson, torturing his long-suffering neurologist, and competing in an endless pissing contest with life.

They’re all so appealing, why choose just one?

DEAR MURPH, writes his daughter in an exchange of notes about his increasingly erratic behavior:

It occurs to me — your brooding mind being what it is — that you may think I’m trying to lock you up in the loony bin. I’m not. You probably ought to be locked up in the loony bin, but that condition long preceded your recent shenanigans. I’m concerned that you’ll harm yourself. It’s that simple.
Your dutiful and loving daughter,
Máire

Dear Dutiful and Loving,
I’m sorry, but I never had a daughter, and I don’t know anyone named Máire. My friend Greenberg used to sing about a table down at Morey’s. Is that you? Or are you the old gray mare, who ain’t what she used to be? Ah, but who is?

And so it goes. You’ll find no scorching plotlines in Thomas Murphy, no sampler-worthy feel-goodisms (except for maybe, "They say that Irishmen drink to forget we’re Irish. I say we drink to remember we’re Irish"), and no stunning denouements.

Instead, what you get is a genuinely funny, likeable protagonist who parries with the Fates, his neighbors, and his no-good landlord while wryly taking measure of the world both real and imagined around him. Murph knows mortality always wins in the end, but there’s no reason you can’t kick it in the balls before the buzzer.

"You never crash if you go full tilt. It takes a kind of courage…my ma’s and da’s courage…and Oona’s, when she was certain she was doomed…The courage to gun it, even though you’re predetermined to fail. Because between that certainty and the attempt to refute it is life, boyo — dreadful, gorgeous life."

And nobody gets out alive.

Vango: Between Sky and Earth

This whirlwind of a YA tale takes readers around the globe.