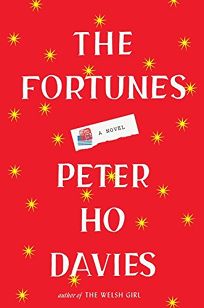 An epigraph to Peter Ho Davies’ second novel, The Fortunes, is a bar of music entitled “Oriental Riff.” I don’t read music, but I immediately heard it in my head, that tinkle of cascading notes that has alerted audiences to Asian-ness in popular American culture for almost a century.

You might know the riff as the opening to the pop tunes “Turning Japanese,” “China Girl,” and “Kung Fu Fighting.” For the Asian-American, Oriental Riff is such an inescapable soundtrack that, like African-Americans and the n-word, the only way to fight it is to embrace it and make it your own.

And Davies does. He owns the Oriental Riff, as well as Ancient Chinese Secret, ching-chong in sing-song, slant-eyed inscrutability, shortness, small dicks, and much of the rest of the all-you-can-eat buffet of Chinese stereotypes and insults.

Immediately enraptured by “Gold,” as the first chapter of The Fortunes is titled, I thought I was embarked upon an historical-fiction novel about Ling, a mixed-race immigrant from Hong Kong’s Pearl River Delta who arrives in the 1860s in Gold Mountain (as California of the Gold Rush days was dubbed by the Chinese) to make his fortune. He begins working in a laundry and then as valet to Charles Crocker, a builder of the Pacific Railroad who recruited hordes of Chinese coolies willing to do backbreaking labor for low wages.

I was only a quarter right.

For, in the next chapter, “Silver,” we leave Ling to join Anna May Wong, the first Chinese-American film star, on her one and only visit to China. Short vignettes with piquant titles like “Orientally Yours,” “Exclusion,” and “Yellowface” render a heartbreaking portrait of an artist whose career is stunted by lurid stereotypes, ingrained prejudice, and miscegenation laws.

At this point, I said, “Ah! So! I think this is not a novel, but four novellas, each one portraying a moment in Chinese-American history.”

I was half right.

The third chapter, “Jade,” presents the musings of a friend of Vincent Chin, who was beaten to death on the night of his bachelor party in Detroit in 1982 by two white men angry about the Japanese dominance of the automobile industry. Chin’s death itself was a tragedy, but the greater crime was the denial of justice: His murderers received no jail time and never paid the fine that was their only punishment. A civil suit ensued, in which one of the killers was found guilty of violating Chin’s civil rights. It was overturned on appeal.

The final chapter of The Fortunes reveals that the book is, in fact, a novel and not four unrelated vignettes. Though the stories can stand on their own (Davies has published two critically acclaimed collections of short stories), recurring motifs, details, and historical figures — such as the metaphor of the elephant, word play on the surname Wong (“two Wongs don’t make a right”), and Leland Stanford, a politician from California, founder of the university that bears his name, and bigot who called the Chinese a “degraded race” and “the dregs of Asia” — thread through the chapters, weaving a poignant, intricately patterned brocade of the Chinese-American experience.

“Pearl,” the last chapter, takes place in today’s China, where John, a mixed-race Chinese-American, and his Caucasian wife are waiting to adopt a baby. No longer in the realm of historical fiction, The Fortunes reveals itself instead to be a metafictional novel. John is a writer whose novel about the building of the transcontinental railroad is “taking longer to finish than the railroad to build, he used to joke, though to be fair, there were more Chinese working on the railroad.”

He also flirts with fictionalizing the life of Anna May Wong, but never progresses beyond the notes stage (hence the abbreviated vignettes of “Silver”). The faculty of the university where he teaches believes he is working on a book about Vincent Chin. To earn money, he uses the pseudonym Jack Ling to crank out novelizations of “Kung Fu,” the 1970s TV series in which the title character is played by a Caucasian actor in yellowface. John is in Guangzhou, on the shores of the Pearl River, which brings the readers back to Ling, from the first chapter.

The Fortunes is an extremely detailed guide through not just the history of the Chinese in America, but the stereotypes, legends, cultural markers, and idioms that permeate our society, from the term Mongolism to describe Down syndrome (“as if what was wrong were an excess of Chineseness”) to that pernicious question, “Where are you from?” that bedevils Asian-Americans everywhere.

His genius is not in the aggregation, but in the canny crafting of an embarrassment of racist riches into a resplendent, inventive, heartbreaking chronicle of the Chinese-American experience.

One does not have to be Chinese or American (Davies grew up in England, and nativists should be proud of his pitch-perfect assimilation of American culture) to enjoy The Fortunes, a jackpot of literary gold. If I were to choose a message for Peter Ho Davies’ fortune cookie, it would read: “You will soon win many awards.”

Alice Stephens writes a monthly column for the Independent, Alice in Wordland. She avoids fortune cookies.