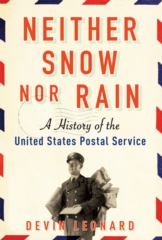 “It is one of the biggest businesses in the country,” President Harry Truman said in 1951. “And without it, the rest of the country wouldn’t [be] able to do business at all.” Sixty-five years later, many younger readers might be hard-pressed to figure out that Truman was speaking about the U.S. Postal Service — that curious remnant of a bygone era, which today mostly delivers advertisements we didn’t ask for and don’t care about.

There’s still the occasional birthday card or Amazon delivery or check in the mail that miraculously makes it to its intended destination. But with so many other communication and delivery options, it’s hard to understand how important the USPS once was. If anything, the long and complicated history of our nation’s mail system has been largely oversimplified and often misremembered, when it’s remembered at all.

Thankfully, author Devin Leonard has written Neither Snow nor Rain, a lively examination of America’s most ubiquitous public institution. Leonard’s venture into the history of the USPS began in 2011, with his Bloomberg BusinessWeek cover story entitled “The End of Mail,” an article that garnered more reader responses than any piece Leonard had previously published (mostly email responses, I assume, but I fervently hope he got some actual letters).

Love it or hate it, people care about what happens when small rural post offices close down, or when letter carriers’ appointed routes are cut short. It didn’t take Leonard long to realize that his article had only begun to scratch the surface of the USPS’ remarkable backstory.

The history of how messages and packages were conveyed is vast. Whether measured by the ebb and flow of delivery volumes, the number of post offices built, or the magnitude of political intrigues, Leonard presents his material in a way that is both captivating and thoughtful about how the USPS contributed to American culture.

On the other hand, the postal service has not kept pace with the times. Expansion-of-service attempts have not always been successful and opportunities have been missed, particularly with the lack of e-services, which did not receive enough political support early on.

Leonard does a yeoman’s job of weaving together both the worldwide traditions of mail delivery, from the Assyrians and ancient Romans to Marco Polo and beyond, with the tales of the USPS’ unique dramas and outsized actors. Along with his profiles of the postmasters general and competing delivery-company CEOs, Leonard reveals a well-trained eye for the descriptive and memorable stories that anchor each chapter’s significant themes.

Who knew, for instance, that until the practice was specifically outlawed, children could be sent through the mail, parcel post? Or that multiple postmasters became de facto federal censors, outlawing the delivery of whatever they personally considered obscene?

We’ve all heard of the Pony Express, but how many of us realize that it was a failed PR blitz, unprofitable and short-lived, despite the public’s fascination? Or that the battleground postal districts during the Civil War alternately delivered and absconded with mail, depending on which way the war was going?

Leonard, a business journalist for many years, has found a comfortable niche in historic nonfiction. Using a few tools from Gen-X historian Sarah Vowell’s playbook, he augments his lively narrative by occasionally placing his readers in the here and now, inserting compelling stories about people like Evan Kalish, who made it his goal to visit every post office in the U.S. (as of publication, he’d gotten to 6,557 of them, with a mere 29,084 to go), and Anna Dyer, postmaster on Maine’s Cliff Island, who lives in fear that her small post office will be shut down and a community center will forever be lost.

Confession: I did not know much beyond the schoolbook history of America’s postal service until I started reading Neither Snow nor Rain. What I soon gleaned from Leonard’s first book-length effort is the fact that there is something consistent and elemental in the story of the USPS that reflects what we as a people have historically valued, beginning with Ben Franklin’s efforts to ensure a connected and informed citizenry.

Despite over two centuries of ups and downs, advances and misfires, it turns out that, when you learn just a little about how the USPS began, and how it has survived despite the odds, you just can’t help but root for this All-American institution.

It’s been over five years since Leonard wrote the article that became his impetus for this book. And in that time, we haven’t gotten to the end of mail — not yet, anyway.

Kristin H. Macomber is a writer and obsessed collector of special-issue stamps who lives in Cambridge, MA.