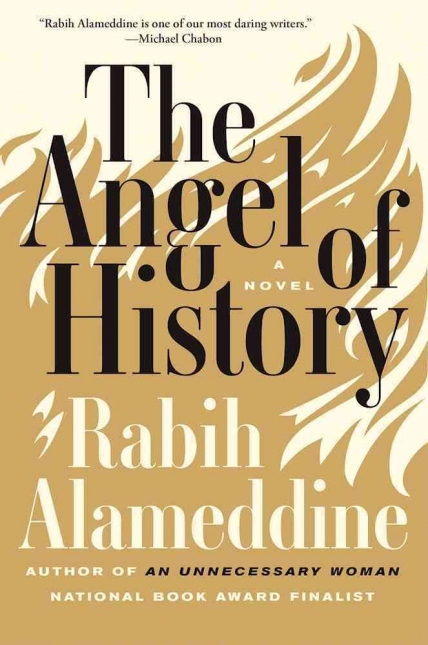 A confession: I love to read Rabih Alameddine. He always surprises me, startles me out of some kind of readerly complacency. I am not alone. Reviewers have called him one of our most daring and innovative writers. “Incendiary” is the word Atlantic Monthly Press uses on the advanced review copy to describe his new novel, which is, appropriately, due out around All Souls Day.

The Angel of History is an allegory, a 304-page meditation on love and death in the post-AIDS era of terrorism, S&M, drones, and pet cats — a mock epic with nods to Milton and Walter Benjamin. The narrative opens from the perspective of the devil: “There is a dignity in decay, Satan thought, as he regarded the terracotta planter basking on the kitchen window’s sill.”

Satan sits by the hearth in Jacob’s living room conducting the first of a series of interviews with Death. The absent Jacob (a poet and the novel’s protagonist) is their subject as the two odd figures negotiate his fate, a tape recorder on the coffee table.

Mr. D., with his pert green eyes and glossy nails polished blue-black, addresses Satan as “Father” and stares at the photos on the mantle of “all the young men he snatched well before their time.” Jacob needs Satan, we are informed, “to help him remember, to harrow the soil and dislodge the silt.”

So, reader, settle down with Satan, if you dare. You are invited to listen in on Satan’s fireside chats with Death and the 14 Saints. It’s a cozy scene and setting, the details all matter in the multitude of unfolding stories that follow; but don’t worry, just enjoy. The author will let you know that the voices you think you hear are real: bits from Milton, Dante, and Donne, the Bible, and the Quran. All you can do is trust the omniscience of the narrator and the author’s greater design.

The Lebanese-American author delivers an Arabian Nights entertainment for our century, taking us through a kaleidoscope of tales — lives of saints, patriarchs, angels, and jinni; plus various artists’ representations of the original Middle Eastern Jacob, son of Abraham and father of the 12 tribes.

With its dizzying array of verbal and visual allusions, Angel is wildly entertaining, but not necessarily an easy read. The narrative voice shifts from third-person omniscient to first person. Four recurring chapter headings orient the reader and provide a pattern of expectation: “Satan’s Interviews,” “At the Clinic,” Jacob’s Journals,” and “Jacob’s Stories.”

The forward action of the frame story takes place in the course of one night in the waiting room of the Crisis Psych Clinic, where Jacob waits to see the psychiatrist. A survivor of the late-20th-century San Francisco AIDS plague, Jacob was the primary caretaker for many friends and lovers. Now, with only his old cat, Behemoth, for company, he is left alone to mourn his losses. Doc was the fifth of them. In a silent one-way conversation, Jacob addresses Doc, his dead husband, revisiting the past that haunts his brilliant mind and soul.

An immigrant San Francisco poet whose early life was full of uprootings, Jacob was “a boy indoctrinated in more than one religion,” who learned to read and write in Arabic and French by the unreliable light of a kerosene lamp. Born Yaqub in Yemen, he was raised in a Cairo whorehouse by his mother and her colleagues until he reached adolescence, whereupon his rich Lebanese father sent for him and promptly consigned him to a Beirut orphanage and lycée run by Catholic nuns.

Near the end of the novel, the last of “Jacob’s Stories” jolts the reader with its abrupt shift in tone and perspective. In a fabulous New York City penthouse, a couple, just arrived from Muncie, circulate among guests. The most striking thing in the room is a large gilded cage. The husband is startled to see that it contains a swarthy bearded man in a long white garment and a tattered turban, sitting in a chair reading.

Is it the evening’s entertainment? Is it an Arab reading the Quran? Yes, the host explains, but not to worry, he’s been tamed and trained; the book has been expurgated. They needed a pet, but are allergic to cats, and dogs are too much trouble, so they “got an Arab.” Everyone wants one. Just look: Press the smartphone app and music cues the caged Arab to do tricks (the rich Arab, the terrorist, or the call to prayer).

The housewife from Muncie wants one, but can they afford it, her husband wonders. Wild ones cost the most, it seems. A woman with a huge diamond pendant boasts that hers “once rhymed orange blossom with playing possum.” The host’s gay partner says, “Poets are a dime a dozen. Though by far the worst Arabs are Lebanese novelists.” The housewife from Muncie blushes.

The Arab in the gilded cage can be heard whispering, “And such are the parables We put forth for humankind, but only those who have knowledge will understand them.” And the reader also blushes as the boundaries between spectator/performer and reader/writer dissolve. We all have been skewered by the Parable of the Arab in a Cage.

Bridget Connelly is professor of rhetoric emerita at the University of California, Berkeley.