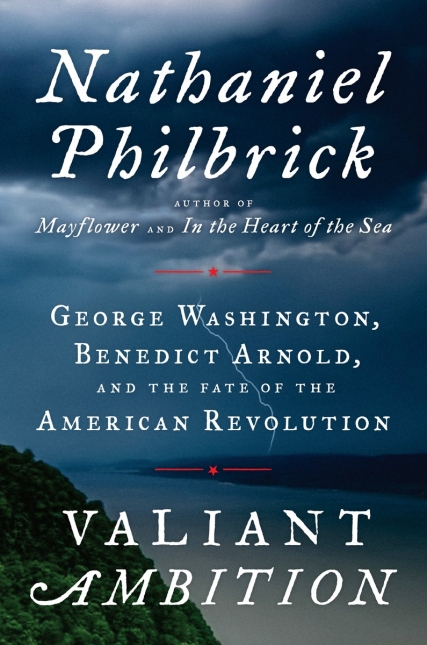 The love of money is often a centerpiece in iconic stories of American history. We have our bank scandals and Bernie Madoffs; the American Revolution had Benedict Arnold. In Valiant Ambition, bestselling author Nathaniel Philbrick offers a compelling examination of Arnold’s treason to the American cause of independence in 1780. As in his previous books, Philbrick not only captures the tenor of the times, but also the spirit of the various players.

It is clear that Philbrick has a certain sympathy for Arnold, who was arguably the best field commander in the Continental Army. If there were sounds of gunfire, Arnold most likely could be found in their midst. In some ways, his battlefield derring-do led to his downfall.

Arnold’s decision to turn on the American cause makes him unlikable; his behavior is that of a spurned lover, someone who’d invested a great deal of energy in another human being only to find his heart flayed over personal bitterness, a sense of righteous indignation, and a lack of money.

“Being a republic,” Philbrick writes, “the country they were struggling to create was ruled not by a king or an emperor but by the mutual consent of the governed. Arnold had betrayed not just Washington but every American citizen he pledged to protect. Since republics rely on the inherent virtue of the people, they are exceedingly fragile. All it takes is one well-placed person to destroy everything. Washington, his face betraying the sadness, anger, and shock of this most recent revelation, turned to [the Marquis de] Lafayette and asked, ‘Whom can we trust now?’”

Washington was the ultimate believer in republican virtue, the idea that ordinary people could govern themselves with great personal and national integrity, where the state’s interest came before personal interest. Washington took Arnold’s betrayal personally.

Arnold suffered two significant wounds during the war. One, a leg injury, during the aborted American invasion of Canada, and then again in October 1777, when he was leading a mad-dash charge into an enemy redoubt. A musket ball shattered his left femur above the knee. “The same narcissistic arrogance,” Philbrick writes, “that enabled him to face the gravest danger on the battlefield without a trace of fear had equipped him to be a first-rate traitor.”

Arnold’s bravery was at some level reckless. The wounds he suffered were directly the result of his wanting to be in the hottest spot during the heat of battle. However, he failed to leave his rash behavior on the battlefield.

Arnold justifiably believed he deserved a promotion. However, intrigue, jealousy, and back-biting prevented his rise in command. Given the scope of rivalries that existed in colonial America, it is a wonder that the Revolution succeeded. A spurned and financially broken Arnold almost insured that it would be lost.

The author’s premise — that greed drove Arnold to abandon his nation at the moment of its birth — is compelling. Philbrick weaves an adroit story of personal corruption against the panorama of the birth pangs of a new nation, and his literary style works on both accounts.

After the stunning American victory at Saratoga, the turning point in the war in which Arnold played a pivotal role, his wounds precluded him from combat command. Thus he was appointed by Washington as the military governor of Philadelphia after the British evacuated the American capital in spring 1778.

It was in Philadelphia that the widower Arnold fell in love again, this time with the beautiful Peggy Shippen, the daughter of a wealthy Philadelphia Loyalist. This affair played a role in Arnold’s treachery, as he had grown accustomed to a certain lifestyle as military governor and wooed Shippen with the promise of a glamorous life. Court-martialed over his financial indiscretions, Arnold begged Washington to back him, hoping Washington’s support would clear him of any serious charges.

Arnold viewed Congress with disgust. As the Americans’ war effort continued to flounder, he began to believe the cause for which he had suffered personal and financial loss could no longer be well served. His now wife, Shippen, with contacts in the British Army, egged him on. When cleared of the most serious charges, he sought an opportunity to command the American garrison on the west bank of the Hudson River.

Once Washington secured him the position he desired, Arnold began secret negotiations with British General Henry Clinton to turn over the vital outpost to the enemy.

Philbrick is able to produce an easily understandable accounting of a complicated story. Even as Arnold’s plan unravels upon the capture of his British accomplice, Major John Andre, Arnold casts his lot with the British. But a traitor can never be trusted, and even as an officer in British uniform, Arnold remained suspect to his superiors.

If readers are looking for an intense, well-written, dramatic story with stirring battle scenes, then Valiant Ambition is a must-read. But at its heart is a complex and pathetic figure tinged with a sad lack of remorse.

[Editor’s note: Nathaniel Philbrick will read from Valiant Ambition at Politics and Prose in Washington, DC, this Wed., May 11th, at 7 p.m. Click here for details.]

James A. Percoco is the Teacher-in-Residence for the Civil War Trust and the Journey Through Hallowed Ground Partnership and enjoyed a 32-year career as a high-school history teacher. He is a member of the National Teachers Hall of Fame.