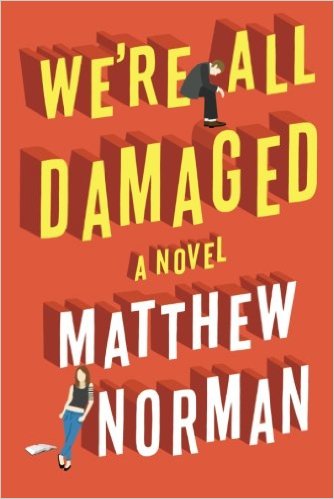 “Have you ever stopped and asked yourself, ‘What’s the worst possible place I could be right now?’ It’s 11:36 p.m. (central standard time), and that’s exactly where I am.”

The place is Nebraska, and Andy Carter, the luckless protagonist in Matthew Norman’s terrific new novel, We’re All Damaged, isn’t thrilled to be back, especially since he’s been doing okay in the Big Apple. True, he’s a subpar bartender, his first blind date in forever stands him up, and his semi-feral cat, Jeter, can’t decide whether to sit in his lap or slash his Achilles.

But all things considered, Gotham beats the hell out of Omaha, the place where, a year earlier, Andy’s then-wife, Karen, announced she wanted a divorce during what he now thinks of as the Great Applebee’s Massacre.

“Don’t get me wrong,” Andy explains. “I’m not a snob. I don’t have a problem with Applebee’s per se. But I think we can all agree, as a civilized society, that lives shouldn’t change there.”

Yet, not only did his life change, but in the intervening months, everyone else’s has, too. His beloved grandpa is dying (hence Andy’s urgent trip home); his mother, Nancy — a local radio-talk-show host — is way too thin, blonde, and right-wing now that Fox News is courting her for the big leagues; his retired-accountant father spends an unreasonable amount of time picking off backyard squirrels with a paintball gun; and his successful older brother, Jim, is still kind of a dick.

On the bright side, BuzzFeed named the resulting “Worst Best Man…Ever!!!!” video the sixth-biggest wedding fail of all time, so Andy’s got that going for him.

All in all, things are proceeding about as he expected. But then Daisy shows up. As is wont to happen in breezy, playful novels — this is an observation, not a criticism — the quixotic, beddable deus ex fuckina swoops in, says and does all the right things to pull Andy at least partly out of his funk, and rattles the supporting cast just enough to keep things interesting.

But what’s Daisy’s connection to Andy’s grandfather? Why does she tell staffers at the hospice that she’s Andy’s sister? Who is she really?

Who cares? Matthew Norman has written a funny, likable novel with a funny, likable protagonist — someone you’ll root for even as you cringe at the things he does. (Let those among us who’ve never flung an ice-cream float at our ex’s house in the middle of the night cast the first stone.)

Surprisingly poignant in places, We’re All Damaged is a perfect summertime (or anytime) read: the story of a thirtysomething Everyman who never quite gives up on his better angels in spite of the universe conspiring to make him do otherwise.

“She kisses me on the cheek,” Andy recalls of saying goodbye to Daisy before heading back to New York. “‘Go home, Andy Carter,’ she says. ‘Shake it up. Start all over again. You’re ready.’”

Despite his dysfunctional family, spotty love life, and history of existential face-plants, he is.

The Nixon White House meets "The X-Files" in this unusual, entertaining tale.