From a debut novelist comes this ambitious, profound story spanning continents and generations 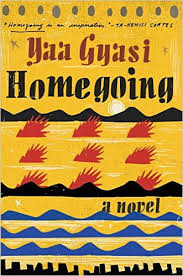 Homegoing is Yaa Gyasi’s courageous debut novel spanning both time and the globe. Born in Ghana and raised in the U.S., Gyasi has spun an epic tale extending over 300 years and linking both countries across the ocean.

The novel starts in the interior forests of 18th-century Ghana. Through accidents of fate and fire, half-sisters Effia and Esi grow up in different tribes, not knowing one another. Effia is a beautiful Asante girl whose mother plots (for multiple, unfolding reasons) to marry her off to a British officer. She moves in with him at the Cape Coast Castle, the center of British trade on the Gold Coast.

Under Effia’s feet, in the castle’s dungeon, lies Esi. After growing up in a Fante village and being captured in tribal warfare, Esi is sold into slavery. Her imprisonment in the castle marks the beginning of her long, torturous journey to servitude in America.

Thus begins a saga following generations of this split family tree. Effia’s son, Quey, grapples with his family’s complicity in the slave trade, both on the Asante and British side, as well as with growing homosexual feelings toward his best friend.

Esi’s daughter, Ness, is a plantation slave who makes a break for freedom with her husband and son. More descendants include a runaway slave with forged free papers whose happy life in Baltimore is threatened by the passage of the Fugitive Slave Act, and a free man arrested on false grounds and forced to provide prison labor in 1880s Alabama coal mines.

African descendants include Akua, the “Crazy Woman” with violent visions of fire that lead to a tragic end, and Yaw, her scarred and lonely son, a bachelor who finds himself late in life drawn to his garrulous young house woman, Esther.

Through these varied yet intertwined viewpoints, Gyasi explores the deep territory of colonialism, slavery, discrimination, corruption, identity, and homecoming. She approaches tough topics with unflinching honesty. Her description of the horrific conditions in the castle’s dungeon, for instance, is explicit, yet her language shows remarkable restraint. She gives it to us straight, and therefore we are enlightened without feeling manipulated.

Gyasi provides plenty of clues to understanding her characters’ thoughts and environments. While this is helpful, especially for readers who have had little previous exposure to African culture or literature, it can at times veer into the terrain of over-explaining. For example, when a farmer surveys his damaged crop of yams, we don’t necessarily need to be told that yams are “that most precious crop known far and wide to sustain families.”

Didactic moments like this can pull the reader out of the story. This happens more toward the beginning, somewhat by the necessity of explaining an unfamiliar time and place. But Gyasi is at her best when she settles in and lets her characters tell us about themselves in their own terms, such as when a man promises to marry his longtime friend when he gains the financial means to do so: “I don’t care that you are the daughter of a nameless man. I will marry you as soon as my land tells me that I am ready to marry you.”

Gyasi gives us direct access to her characters’ innermost thoughts, summing up complex historical and sociological dilemmas in clear, direct terms. In one scene, Ghanaian-American high school student Marjorie is asked by her teacher Mrs. Pinkston to write a poem for Black History Month about what it means to be African American.

“Listen, Marjorie, [said Mrs. Pinkston], I’m going to tell you something that maybe nobody’s told you yet. Here, in this country, it doesn’t matter where you came from first to the white people running things. You’re here now, and here black is black is black.”

This is fascinating stuff and could easily be expanded into a whole satisfying book on its own. In this encapsulated version, it can feel like a fly-by over country we would have happily explored on foot. The structure of the book dictates a somewhat high tell vs. show ratio, because with each new character, a good amount of reportage is required to connect the new character with their forebears and to situate the character in the new time and place.

But perhaps it is unfair to criticize a book for raising such interesting and complex issues in truncated form. The generation-to-generation format can lead to a recurring feeling of disappointment at not having spent more time with each character, but on the other hand, it indicates fertile ground for more books from Gyasi in the future — books I look forward to reading.

Tara Campbell is a Washington, DC-based writer. With a BA in English and an MA in German, she has a demonstrated aversion to money and power. She's an assistant fiction editor with Barrelhouse, and her monthly column in the Independent, Text in the City, covers all things books- and writing-related in the DC area. Other publication credits include Barrelhouse, Punchnel’s, Toasted Cake Podcast, Luna Station Quarterly, the London Journal of Fiction, Masters Review, and Queen Mob's Teahouse, among others.