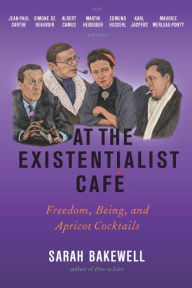 In a Parisian café, circa 1933, the not-yet-famous Jean-Paul Sartre and Simone de Beauvoir meet with friend and fellow philosopher Raymond Aron. He tells them about Edmund Husserl’s phenomenology, a philosophy concerned with the experience and description of phenomena.

Sartre and de Beauvoir vow to learn this new way of thinking. As they do, they develop their own philosophical system in response: existentialism.

Author Sarah Bakewell is known for her brainy blend of biography and profound thinking. Her fourth book, At the Existentialist Café, takes on existentialism, the 20th-century philosophy that is commonly attributed to Jean-Paul Sartre’s 1943 magnum opus, Being and Nothingness. Bakewell leads readers on a tour of fascinating discussions between Continental figures who will become luminaries in philosophy.

In short, existentialism posits that individuals are free to construct a life of their own choosing within the range of circumstances into which they have been born. In this space of freedom, one has a responsibility to do something.

For Sartre, this something has profound political implications: One must always be in a state of action against tyranny. In everyday terms, this call to action meant resisting the Nazi takeover of Europe.

If the lives and work of Sartre and de Beauvoir play a central character to Bakewell’s book, a supporting cast of their contemporaries (who were often friends, enemies, and lovers) chimes in delightfully and eccentrically over the course of several decades, adding nuance to existentialism as they defined it.

German philosopher Martin Heidegger appears as a foil for Sartre: an anti-human to Sartre’s all-too-humanist outlook; an atheistic metaphysician* to Sartre’s life-affirming body of work; a let-it-be to Sartre’s forceful activism; and a Nazi to Sartre’s presence in the French Resistance.

The others — Albert Camus, Karl Jaspers, Maurice Merleau-Ponty, and more — develop their respective existential philosophies. That’s “absurdism” in the case of Camus, who remains firm in his stance that violence is never an acceptable form of action. Jaspers, at ease with more fluid visions of existentialism, wrote, “A different thinking, a thinking that, in knowing, reminds me, awakens me, brings me to myself, transforms me.”

While clearly admiring Sartre, Bakewell is not reticent about his faults. He was a prolific creator who felt a lifelong duty toward oppressed people everywhere. Sartre refused to become part of any larger “system,” going so far as to reject the Nobel Prize. But he was also a terrible listener and an arrogant, extremist thinker who changed his mind often and threw away friendships even more often.

A fervent leftist in spirit, Sartre managed to get himself ejected from nearly every Marxist circle he entered. Was it his difficult personality, or his philosophy itself, with its emphasis on right-of-center concepts of individual freedom and responsibility? Regardless, Sartre was defined by his experiences under Nazi occupation and would spend the rest of his life running in what he saw as the opposite direction. Like Heidegger, Sartre’s philosophy did not always square with his politics.

Bakewell writes with a journalist’s sensibility, providing facts without valuation. Nevertheless, her rendering of the Sartre/de Beauvoir relationship paints a picture of de Beauvoir, the less famous of the two, as the greater thinker. More sophisticated than Sartre and better with foreign languages, her books and plays were more coherent than Sartre’s body of work, much of which was piecemeal and, in later years, unrevised.

Perhaps it was de Beauvoir who summed up existentialism in the clearest way: “Our condition is to be ambiguous to the core, and our task is to learn to manage the movement and uncertainty in our existence, not to banish it.”

Just as Bakewell calls her chapter on Heidegger “The Magician from Messkirch,” readers might name Bakewell “The magician from Bournemouth” for weaving the lives and works of existentialist thinkers into a series of highly readable, passionate encounters. Anecdotes from Bakewell’s personal experiences with existentialism amuse, and her wise renderings stand up to even the best quotes from Sartre: “Since 1914, and especially since 1939, people in Europe and elsewhere had come to the realization that we cannot fully know ourselves; that we have no excuses or explanations for what we do — and yet we must ground our existence and relationships in something firm, because otherwise we cannot survive.”

So intellectually steady and apolitical is her delivery, one might be surprised when she diminishes Heidegger’s work on the grounds of his Nazism.

Clearly, the Nazi party was on the wrong side of history. But if we are to be intellectually rigorous, we should attempt to parse Heidegger’s contributions to philosophy from our feelings about his moral failings.

Heidegger transformed understandings of Dasein (Being) into an involvement with the moment, even as that moment is contingent and fleeting. His work culminates in the conclusion that the ultimate meaning of Being is, in fact…time! This insight makes him, arguably, the most influential modern philosopher.

So how do we separate Heidegger the Nazi from his groundbreaking work as a philosopher? How can we, as Simon de Beauvoir instructs, learn to “be” with our ambiguity? Bakewell’s answer in the case of Heidegger is disappointing: She cannot.

Well-established fans of philosophy will be intrigued by this insider’s perspective and will surely admire Bakewell’s sophisticated genealogical approach. By the same token, newcomers seeking philosophical conversion won’t be outpaced, as there is an excellent dictionary of philosophers at the back of the book which Bakewell humbly names “cast of characters.”

While there’s no substitute for reading the existentialists in their own words, Bakewell’s account is tremendously moving and interwoven, an intellectual project that’s wide enough in scope to make readers think differently about the entire 20th century.

(*Although a declared atheist, Heidegger’s philosophy has a distinct, non-religious spiritual quality.)