An epic, philosophical story for thinkers 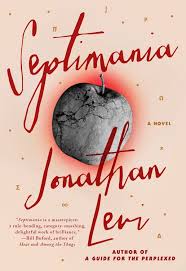 To say Jonathan Levi’s second novel, Septimania, is absurdly erudite, overly ambitious, or just plain pretentious would be correct. It would also, however, miss the den of brilliant and emotionally rich fun the book has to offer.

I regularly tell readers to avoid book-jacket descriptions, and this one doubly so because describing Septimania is madness. In it, our Hero begins his journey at Oxford, finds he is mathematically destined to love, inherits a hidden Jewish kingdom, and goes on a 50-year journey to solve the riddle of human existence and find his love.

Born of idealistic Western philosophy and placed into a world of harsh realities, Levi’s book can seem out of time. But those who remember his first acclaimed novel, A Guide for the Perplexed, know he is an author to trust.

The central character, Malory, kicks off the novel by losing his virginity and inheriting a kingdom. These two events set Malory off on an Arthurian-like quest. Gifted to the Jews of France in the eighth century by Charlemagne, Septimania (which in reality changed hands as jealously as any promised land) needs a savior, and this failed Ph.D. student fits the bill.

Malory’s journey goes through the Red Scare to 9/11 and is skillfully navigated by Levi. One of the novels achievements is its interweaving of timelines; though the structure is linear, it also features flashbacks to the founding of Septimania, various origins of fables, great moments in science history, and the darker corners of American political history. Levi is using a lot of ingredients here, and the result is a playful, rich dish created by a master chef.

Louiza, the object of Malory’s love, could easily suffer the fate of many a heroine. Instead, we find a mathematical genius filled with her own curiosities and desires, and whose identity evolves through 50 years. Her character arc is as harrowing and powerful as Malory’s. She is neither a manic-pixie dream girl nor a damsel in distress, though at times she is manic and in distress.

This book is a romantic one, filled with all the love, lust, action, and longing that occupy us throughout our lives. Yet math, music, physics, existential philosophy, the laws of gravity, and Platonic forms are all given equal weight, too, as personified in sentences like: “Louiza = Malory. As set to music, of course.” And, “And sure enough, as Malory reached out to take the apple, he felt a tug from either side, as if the statue of Newton on the left and the statue of the woman on the right were fighting him — as surely as the Earth — for the piece of fruit.”

Septimania is like a liberal arts degree in novel form: It strives to show the interrelated natures of all things while delving into the details of what drives us apart. At times aggressively postmodern, the philosophies explored in Septimania hurtle toward the Grand Unified Theory.

There is a problematic moment when the story dives east to Arabian Nights only in that the majority of the story is thoroughly Western; the tales and their teller are engaged with wonder. It is that wonder that guides and brings the pleasure through this formidable read. The novel salutes Newton in more ways than one, but namely in that Levi obeys no master in limiting his narrative, while simultaneously saluting the great fables and scientists who came before him.

Levi's idealistic novel is as challenging as it is refreshing. Boldly putting his fable forward, he is more honest than many of today’s fiction writers. His experimental narrative implicates the reader in a philosophy of science, love, sex, and religion resulting in a Whitmanian mash: hope and despair, finite detail and grandiose allusion.

If you want an adventure and a bold philosophy, Septimania will expose you to a world where you become the hero, discovering the truths you knew all along.