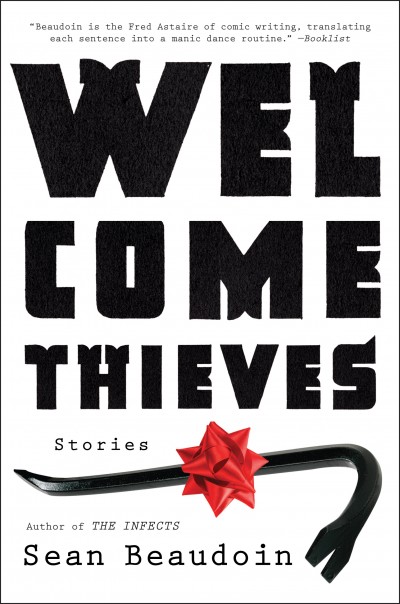 Two stories into Sean Beaudoin’s Welcome Thieves, I strongly considered putting the collection down. Chalk it up my own literary closed-mindedness or what I had for dinner that night. Forever the stubborn reader, I pushed through — my insistence to finish every book I start outweighing my growing disinterest. I wasn’t picking up what Beaudoin was putting down, afraid of trudging through something mundane and samey.

I was wrong. Very, very wrong.

About three stories deep, in a piece titled “Hey Monkey Chow,” something clicked. It wasn’t any single thing, either. Boy gets bitten by his mom’s rabid monkey she won in a card game. Boy grows up to be an infamous hometown drug kingpin named Butterfly — you know, classic stuff. Whichever way you slice it, the premise is nuts. But in a breezy 20 pages, Beaudoin pulls everything together in this weirdly tragic and bizarre cautionary tale of sorts that’s, somehow, more real than anything I’ve read in quite some time. I was entirely on board. And Beaudoin makes it seem effortless.

The other 12 stories in Welcome Thieves play out in a similarly absurd fashion. Snapshots of life’s strange twists. Little moments that fill out a single day. Chockful of smart humor and obscure references, this book satisfies on multiple levels. And while it requires a bit of effort and investment, eventually you’ll ease into Beaudoin’s raw flow.

From line to line, the author hones in on the hidden beauty and brutality of everyday life. Take a look at this passage from the terrifically titled “You Too Can Graduate in Three Years with a Degree in Contextual Semiotics”:

Stop drinking, get a better job. Write three chapters of a roman a clef about zombie symbology, think it’d be better as a graphic novel. Wish for the nine hundredth time you could draw. Take pictures that will never be famous or hung in the Whitney. Write poems that will never be read aloud or adjudged remotely poetic. Volunteer at a pirate store that’s really a front for teaching low-income kids to read. Meet other men with similar politics, meet other girls with clingy red dresses, have other complaints. Stare into a series of serious eyes, plunge between a series of unfamiliar legs, by the third date fail to be the person you could be for them if only you were different.

Oof! Beaudoin hits hard with these kinds of sharp and relentless details. One moment you’re laughing about a particularly insightful quip and the next you’re holding the page with a white-knuckled grip after a twist turns the story upside-down.

You can imagine Beaudoin smirking from the other side of the page as he sinks his hooks deeper. Sometimes you need to pull back a few of the layers to grasp what he’s getting at, but that certainly doesn’t make the stories unreadable. Quite the opposite; my curiosity was rewarded time and time again. Despite my initial hesitation, I was won over by the sheer craft. The guy’s a true wordsmith, creating complexity without excessiveness — in so few pages, no less!

I’ll keep hammering this point home: Beaudoin has style in spades. At times, lines are clipped, quick, and rough. Some are shifty and hard to follow. But he maneuvers through it without fault. It’s this juxtaposition of beauty and absurdity that makes this collection stand out. This fitting dichotomy mirrors the people of these stories.

With carefully chosen detail, Beaudoin brings his characters to life, makes them exist. They’re people you’ve heard about from a friend of a friend’s friend. They’re the people you idly joke about over drinks, asking whatever happened to so-and-so. The characters of Welcome Thieves existed before their stories take place, and they linger long after. Look at this gentleman from “Exposure”:

Tom, who’s on a tight allowance after Susan cashes his SSI. Tom, who smokes like it’s his only tether, who runs out of Bugler midmonth and then will roll anything, lint, leaves, dust, hair. Tom, who talks to the sconces, berates the wainscoting, describes the damask. Tom, who giggles into his jacket sleeve, an ancient blue pinstripe, who paints canvases of slacked eyeballs in intestinal caverns, more Gacy than Van Gogh, more Manson than Warhol. Tom, who got lost in the park and lived for a week off a jar of salsa.

Creepy Tom is still in my head.

And then there’s Krua, a young girl stuck in a fanatical commune post-apocalypse. And Tiffany, a mysterious trucker who disappears during lunch every day. And Penny, a tarot-card-reading squatter, never in one place for long. And Primo, an underground-fight-club champ saving up his winnings to skip town and start a new life.

Beaudoin’s characters are distinct and fascinating, recognizable yet original. A traveling performer who stumbles into a cursed stage production and finds himself in an even stranger relationship. A naked man who won’t leave his apartment floor. How these vastly different characters can exist so seamlessly within a single collection is beyond me, but it makes for some stellar material.

Joe Dell’Erba is a reviewer here at the Washington Independent Review of Books. As a fiction connoisseur, he’s on the lookout for any excuse to read and write creatively every day. You can find him on Twitter at @jtdelle or discuss the unequivocal joy of a good cup of coffee with him at jtdellerba@gmail.com.