A beautifully written look behind the curtain of fracking and into the lives of those affected by it. 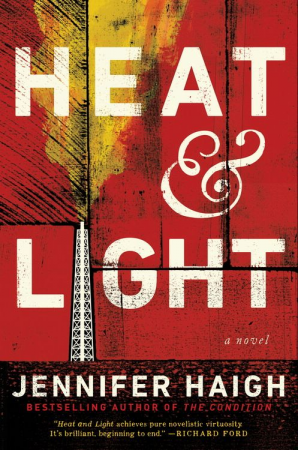 A novel that explores fracking could easily have been boring or polemical, but Jennifer Haigh doesn’t fall into that trap. Although Heat & Light is concerned with the drilling that pulls natural gas from rock deep in the earth, it is also an expansive saga focused on people. We meet those who are enriched by the technology, who work the machines, who protest or publicize, and, most extensively, those who live on property atop the valuable shale.

Haigh wrote about coal mining in Baker Towers and sets her new story in the same fictional town in Western Pennsylvania. Bakerton once thrived, but with the fall of coal, it drifted into poverty. Now, because it sits on the valuable Marcellus Shale, a real geological formation, it has come to the attention of fracking companies: “Rural Pennsylvania doesn’t fascinate the world, not generally. But cyclically, periodically, its innards are of interest. Bore it, strip it, set it on fire, a burnt offering to the collective need.”

Naturally, the story begins with the land. A young man travels from farm to farm, offering payment for the rights to drill. Beautiful property you have. In Houston, a PR man and a CEO prepare for a stockholders meeting. The shareholders meet over coffee and pastry with “the low roar of manly bluster and all-American good cheer.” The business of drilling. The promises of wealth. The same old story.

But when Haigh moves to the people signing those leases, the novel roars to life. We meet Rich, a prison guard, and his hypochondriac wife, who are among the first to sign a contract. When their daughter, like a canary in a mine, gets sick, uncertainty surrounds the cause — contaminated water? The answer seems to lie elsewhere.

Then there’s Mack and Rena, organic dairy farmers who refuse to sign regardless of threats from their neighbors. Despite their resistance, their business suffers because customers fear their milk will be tainted by water from the surrounding farms.

Haigh is expert at describing her characters. Geologists are “rumpled, whiskery men, palpably uncomfortable in polite society, like farm animals brought indoors.” A prisoner has “cheekbones dotted with freckles that look painted on, round as pencil erasers and nearly as large.” This facility serves the reader well as the list of characters is long. Three workers on the rig. Rich’s brother, a reformed drug addict. Rena’s son, Calvin, who is in prison. Gia, a siren at the bar Rich’s father owns. Jess, who has taken her dead husband’s place as the local pastor. Haigh manages to give each a real inner life, even as their numbers spin almost out of control.

Looming over the humans is fracking, a character unto itself which overwhelms the town with mammoth trucks, constant traffic, noise. When Rich visits a drilling rig to complain about the smell of the water, he sees no workers. “It’s as though the giant machines are running themselves…the noise is epic and surprisingly complex, layered like music: a low grinding he feels in the base of his spine, a shrill whine like the world’s largest table saw.”

Surprisingly, the story circles back in time to the partial nuclear meltdown on Three Mile Island. Haigh seems to be saying nuclear power is a grandfather to fracking and that demands for energy, with concomitant disasters, are not new. This one is folded nicely into the novel; Jess’ husband, the pastor, died because of exposure to that very radiation when he was a boy. And so it goes — a great spider web of lives and technology, interacting.

The book is best read as straight through as possible. Put it down for a couple days and the myriad characters may fade — is Shelby the CEO’s assistant or one of the wives? Who is Herc again? But stick it out and you will understand fracking, how it works, how it got started, and the price being paid for it, both in dollars and lives. You will also be immersed in the relationships of the workers and protesters, the farmers and townspeople, not just in relation to the energy but in their daily lives, including an affair, an adult crush, an inheritance, and a marriage breaking down.

These stories are conveyed in gorgeous language that exactly places an experience or a feeling. When the town was first growing, “Painted women appeared, bright and sudden as daffodils.” The guard, Rich, muses on the hierarchy of men in prison: “Inmate is what a CO [Correctional Officer] calls you. Prisoner is what you call yourself. Convict is a term of respect, reserved for old-timers…A ding is a head case, an inmate who acts crazy. They’re all crazy, but most can dial it down when they need to. Not so the dings.” The rhythm, assuredness, and content of that paragraph are stellar and such writing abounds, making this novel a pleasure.

Haigh’s story is so even-handed that you will come away with sympathy for both the buyers and the sellers, and with real compassion for those who struggle with the technology that has invaded and in some cases, transformed their lives. Give this book a chance. You won’t be sorry.

Terri Lewis was a ballet dancer and a database designer and is now working on her third career as a writer. She lives in DC with her husband and two crazy dogs.