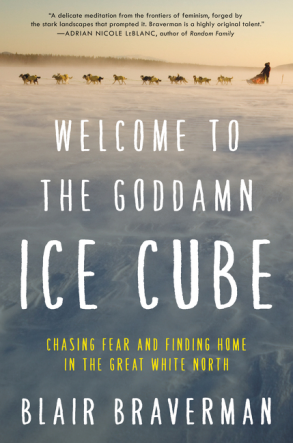 A 16-year-old American exchange student is the victim of persistent sexual harassment at the hands of her Norwegian host father. At 24, the woman returns to claim a piece of Norway for herself. In between, she visits and revisits the ice-encased terrain of both Norway and Alaska, and like the frigid feminine curves of the northern landscape, author Blair Braverman, too, has gone cold in the wake of various traumas. Her bleak narrative, Welcome to the Goddamn Ice Cube, is set in the world of dogsledding, kennel tours, and the harassment endemic to women in the Arctic wild.

The temptation is strong to proclaim Braverman’s memoir a landmark of contemporary feminist literature. But it deserves more credit.

In the era of #Gamergate and “Ghostbusters” (2016), Feminism looms as a capital-F word among pop-culture criticism. From the confounding of the word’s significance evolves a compulsion to label art of even the most tenuous relevance as feminist work. Critics tag objects as feminist like a cultural estate sale. The eventual and inevitable effect of this practice, however, is the dilution of incisive and insightful art that merits honest investigation unobstructed by labels, “feminist” or otherwise.

Such is the case with Welcome to the Goddamn Ice Cube. Despite obvious concern with the intersecting contexts of her gender and location, Braverman eludes the usual buzzwords.

A less ambitious memoir may have settled on the concept of a young woman attempting to survive a man’s world, convincing the reader for 300 pages that the memoirist is, in fact, a “tough girl.”

A less self-aware memoirist may have positioned herself as the Ellen Ripley of the story, or Katniss Everdeen or Sarah Connor: a woman who can one-up any man. (Her name alone begs this assumption. Braver-man? I thought as I opened the book. Could this possibly be her real name? And indeed it suits her.)

Braverman is first and foremost compelled by what lurks outside the constraints of the traditional gender expectations that afflict her. She grows up a tomboy (though she rejects this label, too); knows that home is not her house in California, but rather somewhere snowy, cold, and Northern; and only — eventually — experiences a fulfilling, long-term romantic connection with a transgender man. Traditional gender roles, after all, have not served her well. Braverman opens her memoir at a bonfire where a dying man insists “‘Once in my life I sure could have fucked you.’ He seemed to expect a response,” she continues, “so I tried to think of one. Fear seemed appropriate — a show of being intimidated. The proper gift for a dying man. Could he have fucked me? It made me tired to consider.”

Her perceived apathy is frustrating as a female reader, but ultimately indicative of the extent to which she has become accustomed to this treatment. She refuses to assign blame to others or acknowledge responsibility of any individual, only the culture as a whole. “It was my own job to protect myself,” she claims, “as impossible as that sometimes seemed.”

The language of her story implies a responsibility to effectively navigate abuse, oppression, and a generally accepted rape culture. “I remembered stories I’d heard from other women who camped alone: men who circled their tents, pressed in the dark outlines of hands to the fabric, whispered threats like sweet nothings…And those were the stories that ended well. There was no limit to the ways in which someone could hurt me.”

In other words, she rejects any opportunity to claim victimhood. “The thing was, nothing that had happened to me…was beyond the normal scope of what happened to women all the time. Some harassment by an authority figure, a few sexual remarks, pressure from an insistent boyfriend? What woman hadn’t experienced those things? It made me just the same as everyone else, and luckier than many. It was just a natural result of being female and living in the world.”

She’s right, of course. While one could argue that her rejection of such charged words as rape, patriarchy, and feminist are symptomatic of oppression — no name means no blame, language is a prerequisite for discussion and negotiation — Braverman’s agency allows her to reject these terms for the sake of a clearer picture.

When feminist buzzwords are tossed indiscriminately by contrarian “social justice warriors,” their significance wanes and they often induce little more than eye-rolling. The book’s inherent power is unpolluted by cliché.

And stand on its own it does.

Jordan Millner writes and teaches outside of Washington, DC. Her work has appeared in Kenyon Review Online and Fiction Writers Review.