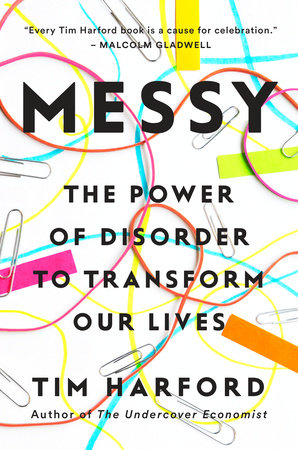 Spoiler alert: Everybody on my holiday gift list is getting this book.

When I was asked to review Messy: The Power of Disorder to Transform Our Lives, I said, “Yes!” Who better to review this book than a neatness nut like me? How fun to debunk the whole idea of messiness being a good thing! (Excuse me while I straighten my laptop to be equidistant from the edge of my desk.)

Well, I can see clearly now, thanks to Tim Harford, a prize-winning economist and journalist based in Oxford, England, that neatness is not next to godliness. I am not morally better than you slobs out there. You have the key to a world of creative serendipity alien to people like me. You are free, while we neat-freaks are trapped in a cage of our own making.

Harford is certainly working against the grain of popular and powerful guilt trips. Here’s one from the Huffington Post that could be my mother talking. I tested Mother one morning by going to school without making my bed. The result wasn’t domestic violence or anything, but I never did it again.

And, of course, there is the phenom of the Japanese cleaning consultant Marie Kondo and her bestselling book The Life-Changing Magic of Tidying Up: The Japanese Art of Decluttering and Organizing. I tried, during a recent move, to apply her “spark of joy” criterion: Does-this-tea-cozy-I-never-use-nonetheless-make-me-really-happy? Too metaphysical, I decided. What is “joy,” anyway?

So, now a happier and messier girl, I can say that Harford has written a delightfully original and engaging look at how being messy is a good thing. He organizes the book by chapters with titles such as “Creativity,” “Winning,” “Resilience” (versus fragility), and so on. In each, he finds concrete, real-world examples that are totally absorbing and fresh.

For example, in the “Winning” chapter, Harford looks at how Nazi general Erwin Rommel thrived on confusion on the battlefield. In fact, he created it, knowing that his strategic improvisation would outsmart everybody: “His men might be tired and confused, but his enemies were utterly bewildered.”

The natural and sustaining “mess and diversity” of old German forests is wonderfully linked in the “Resilience” chapter with Jane Jacobs’ belief in what Harford describes as the “inefficient hodgepodge of different industries” in an old city like Birmingham, England. Single-industry cities like Detroit, he argues, are inherently fragile, not resilient.

One of the best sections is on Ben Franklin. This intensely disciplined and accomplished man found that, of the 13 virtues he spent his life perfecting, the one he did not master was the third: order. His home was a mess, with important papers constantly strewn about the floor. Harford suggests that perhaps Franklin “realized, on some unconscious level, that disorderliness was no bar to success.”

He even takes the analysis to the everyday level of organizing our emails. We’re “typically” better off, he says, not taking the time and effort to organize them into folders. Instead, we should dump all the emails into one folder called “archive” and rely on the search function to retrieve. “You will find your emails more quickly,” says Harford, citing a study done at IBM Research, “than if you hide them in a tidy structure of folders.” Goody. One less thing to obsess about.

Studies show, he says, that daily to-do lists are not as effective as monthly ones. Better yet: no lists at all. That hit home. I make a list every night for what needs to be done tomorrow and would need to go into a 12-step program to give that up.

The big theme of this book is, in fact, not messiness but diversity. Harford argues that if we try to be too neat, ordered, organized, we can end up with unhealthy, un-resilient, one-dimensional forests, cities, workplaces, playgrounds, as well as plane crashes (2009’s Air France Flight 447 disaster, in the “Automation” chapter) and too much trust in online dating algorithms. And we suffer more boring, less interesting lives.

Messy is a fun and informative read. All my friends and family will thank me this December. Meanwhile, I’m getting better at catching my OCD impulses, but I still make my bed every day.

Kate Buford’s award-winning Native American Son: The Life and Sporting Legend of Jim Thorpe (Knopf 2010) was an Editors’ Choice of the New York Times (paperback 2012 University of Nebraska Press). Burt Lancaster: An American Life (Knopf/Da Capo/Aurum UK) was named one of the best books of 2000 by the New York Times and other publications. Buford has written for the New York Times, Film Comment, Bluegrass Unlimited, History Now, and Readex, among other publications, and was a commentator on NPR’s Morning Edition and APM’s Marketplace from 1995-2004. She serves on the board of Biographers International Organization (BIO) and is a co-founder of Biography by Design, LLC.