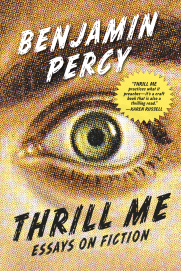 This summer, a small group of editors from the Washington Independent Review of Books went to the theater to see a movie about editing. We didn’t have very high expectations. Watching someone hover over a stack of type-written pages with a red pencil isn’t exactly heart-pounding business.

The movie, “Genius,” mostly dodged the interior process of editing and writing. Aside from montages with red pencil slash marks from the famous editor Maxwell Perkins and scribbling from Thomas Wolfe, writing frenetically on top of a refrigerator, the movie focused on their relationships. After all, the act of writing — or editing — is, well, boring.

So author Benjamin Percy makes a risky gamble when he titles his book on writing Thrill Me. That imperative sentence throws down a gauntlet.

This scrappy challenger is even more daring for attempting to battle its way onto the crowded tiltyard of writing books (or craft books, as writers like to ennoble them). With books already carving out nearly every inch of the writing process, it’s hard to believe there’s room for yet another book on how to write a book.

In this slim volume, Percy draws his sword and slices his naysayers into bits. Or, to use his own metaphor, he juggles flaming chainsaws.

As a child, Percy fell in love with reading under the bloody tutelage of books by Stephen King, Dean Koontz, Anne Rice, and other writers the literary world tends to group into the ghetto of “genre.” And though Percy began his authorial career by dabbling in literary writing without any ghouls, werewolves, or merfolk, he had a realization: Literature doesn’t have to be realistic; fantastical writing doesn’t have to be shallow.

This collection of essays is an effort to argue for including the best of both worlds. Blend the beautiful sentences and rich characterization of literary fiction with the white-knuckle excitement of genre fiction. As Percy says, “What happens next? is why most people read.”

In sixth grade, a friend of Percy’s was at an amusement park. There, a man in aviator sunglasses touched the boy on the shoulder. “‘Hey kid,’ the man said. ‘How do you make a tissue dance?’” But before the boy could get the answer, the man vanished.

Twenty minutes later, the boy, now locked into a roller coaster, spotted the man again. “Hey kid!” he said again, leaning against a railing. “How do you make a tissue dance?” By the time the boy was able to make his way to that railing, the man was gone.

Percy’s friend then spent years chasing and imagining the answer to that question. For his part, Percy uses the anecdote as a launching point for an instruction in how to build suspense. Establish a narrative goal, instill human urgency, create obstacles, create lower-order goals, build a ticking clock, and delay gratification.

Those lessons and others are taught with the confident poise of a fencing master going through his paces, and are driven home with the occasional thrust of a narrative foil. “A good story is a turnstile of mysteries,” he writes. “Once one is solved, another ought to swing forcefully into the narrative.” Percy practices what he preaches in every chapter of this book.

Novels have been around long enough to have refined themselves into a rough pattern. This pattern has a wealth of variation, and yet for those readers attentive enough to discern the structure beneath the story, the similar mechanics are clear.

Learning these patterns while still maintaining an individual voice is the challenge of each novice writer. As Percy puts it, “nothing needs to happen, but some things commonly do. There are no rules, but there are ‘rules,’ certain foundational truths you should understand and master before experimenting.”

In an effort to explore those “rules,” his book magnifies the gears of fiction’s clockwork. Backstory, dialogue, description, and others all fall under his loupe, yet never without the wound-spring tension of a framing device or question in each chapter.

We want to know what real-life jobs have to do with a writer’s work because we’re curious about Percy’s relationship to his farming father-in-law. We want to hear what Percy has to say about symbols because we’re on the edge of our seats, wondering how Percy felt sitting next to his young son in the ICU, where the boy struggled to breathe and insisted his panicked father watch “Toy Story” over and over.

Thrill Me turns the interior, plodding process of writing into a heart-pounding read, and imparts some excellent lessons along the way. Though Percy isn’t the first to advocate taking the best of both the literary and genre worlds, he is an eloquent spokesman.

And did you want to know, like Percy’s friend, how to make a tissue dance? I defer to Percy’s book, but I will leave you with a joke of his.

“What’s the key to suspense? I’ll tell you later.”

Carrie Callaghan’s fiction has appeared in Silk Road, Floodwall, the MacGuffin, the Mulberry Fork Review, and elsewhere. She lives in Maryland with her family, or on the Internet on Twitter at @carriecallaghan or at www.carriecallaghan.com.