The worst year ever allowed this bookworm to achieve a personal best. 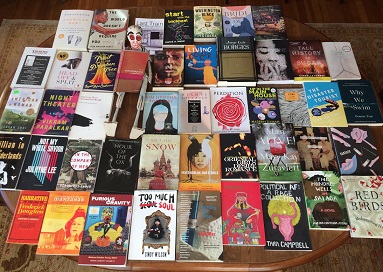 When the seriousness of the coronavirus became evident, my husband and I canceled a spring-break trip to New Orleans and a chance to be on reality TV (my niece was on “Married at First Sight,” and I had carefully choreographed a scene where we all threw drinks at each other) and hunkered down, thinking it would be a maximum of six weeks. Nine months later, we’re still hunkering.

And while I did not write “King Lear,” paint “The Scream,” or come up with the theory of gravity in quarantine, I got stuff done. I completed an historical fiction manuscript on the six months that visionary artist Isamu Noguchi spent in an American internment camp during World War II (no luck selling it yet, but that’s a subject for another column).

A short story of mine was included in a collection by DC women writers, Furious Gravity, as was an essay in the anthology Writing the Virus. My most-read essays were a piece on my classmate Eddie Perry, murdered by a police officer, and a column in the Independent on the original cancel culture.

The year was not without loss for me, though. Our beloved dog died in June, an absence that still aches. I consciously uncoupled myself from a Trump-supporting relative. There were canceled reunions, conferences, and family celebrations.

But all those people not met, events not attended, and dog walks not taken meant that I had ample time to fill. I did what comes naturally to me in times of stress and boredom: I read. By the end of the year, I had read 50 books, a personal best.

True, some were slim volumes of poetry, like Marci Calabretta Cancio-Bello’s sublime Hour of the Ox, which in language both delicate and devastating conjures a mythical world of lost brothers, pearl-diving mothers, fathers as elemental as the weather, and daughters on the verge of leaving; D. Selby Fing’s bold and trenchant Perdition, a Dante-esque exploration of U.S. history, culture, and philosophy, with haunting illustrations by Seth Goodkind; and Tara Campbell’s playful but deadly serious Political AF: A Rage Collection.

But good poetry must be read to savor, and I lingered long over every line of these powerful collections.

Others were weighty books read over months, like Jorge Luis Borges’ Selected Non-fictions, edited by Eliot Weinberger, a career-spanning sampling of the great man’s writings, ranging in topics from the metaphysical to the literary as he references an astonishing number of authors, from Argentinean cowboy poets to Apollinaire to Edgar Allan Poe.

Alas, among the legions of writers he admired, there were precious few women (Virginia Woolf and Lady Murasaki earn his ink) and not a single Black author. Also in the weighty category, not literally but literarily, is Michel Foucault’s turgid Discipline & Punish, a deep dive into the creation of the modern surveillance state starting with the establishment of institutions like schools, hospitals, and armies.

I read 10 books for review (two — Gabrielle Glaser’s stunning exposé of the adoption industry, American Baby, and Véronique Tadjo’s account of an Ebola outbreak, In the Company of Men — will publish in 2021): Vikram Paralkar’s Night Theater (an eerie tale of a surgeon who agrees to operate on a family of corpses); Cho Nam-joo’s Kim Jiyoung, Born 1982 (a fascinating, terrifying, and necessary read); Bonnie Tsui’s Why We Swim (closely researched and entertaining); Kim-Anh Schreiber’s hybrid memoir Fantasy (a weird, intriguing mash-up of genres and styles); Yun Ko-eun’s The Disaster Tourist (a cautionary tale against the travel industry’s excesses and, indeed, the excesses of contemporary, industrialized life in general); Donna Miscolta’s Living Color: Angie Rubio Stories (as multilayered as a mille feuille pastry); Beth Alvarado’s Jillian in the Borderlands (an ambitious work that straddles geographical, metaphysical, and literary borders); and Zidrou and Arno Monin’s graphic novel The Adoption (by making adoption the MacGuffin of the story, Zidrou and Monin got their adoption story just right).

I also interviewed five writers whose books particularly resonated with me: Julayne Lee on her fearless, confrontational debut collection of poetry, Not My White Savior; Donna Hemans on her poignant novel of identity, belonging, family and migration, Tea by the Sea; Nadeem Zaman on his vivid and captivating short-story collection of contemporary Bangladeshis living in Dhaka, Up in the Main House; JS Lee on her powerful social-justice novel about the aftermath of a mass shooting, Everyone Was Falling; and, forthcoming in January, Eman Quotah on her debut novel, Bride of the Sea, a family saga of secrets and identity set in Saudi Arabia and the U.S.

When my younger son came home from college for the summer, we started a new family tradition of reading aloud to each other, enjoying Jeanne Wakatsuki Houston and James D. Houston’s classic memoir of life in an American internment camp, Farewell to Manzanar; Frederick Douglass’ seminal Narrative of the Life of Frederick Douglass, an American Slave; and Lewis Carroll’s evergreen, ever-funny Alice’s Adventures in Wonderland.

Indulging my love of historical fiction, I devoured Carrie Callaghan’s superb Salt the Snow, depicting the intrepid Milly Bennett’s years as a journalist, and a lover, in Soviet Russia; enjoyed every plot twist and fanciful flight of Esi Edugyan’s Washington Black; was transported by Jennifer Nansubuga Makumbi’s Kintu, a multigenerational saga of a curse that haunts the descendants of a Baganda chieftain; and drank deeply of The Hundred Wells of Salaga, Ayesha Harruna Attah’s tale of the slave trade in 19th-century Ghana.

So many books yet to go, and so little word count left in this column!

Briefly, other notable mentions: Donald Duk, Frank Chin’s pioneering work of Asian American literature; Man Alive!, Mary Kay Zuravleff’s serio-comic look at the modern American family; Too Much Soul, Korean adoptee Cindy Wilson’s memoir of being raised in a Black family; Oriental Girls Desire Romance, Catherine Liu’s novel of a woman finding herself in the anarchic 1980s East Village scene; Fruit of the Drunken Tree, Ingrid Rojas Contreras’ tender portrayal of a young Colombian girl and her maid during Escobar’s reign of terror; The Door, Magda Szabó’s compelling autofictional depiction of the fraught relationship between a Hungarian writer and her housekeeper; and Anthropocene: A Very Short Introduction, wherein Erle C. Ellis describes with alarming clarity the dire effects humans have had on this planet in a very short space of time.

Fifty books in one year is a high score that came at an enormous price. For the first time in my life, I’m looking forward to reading fewer books next year.

I Know It When I Read It

What makes a novel "literary"?