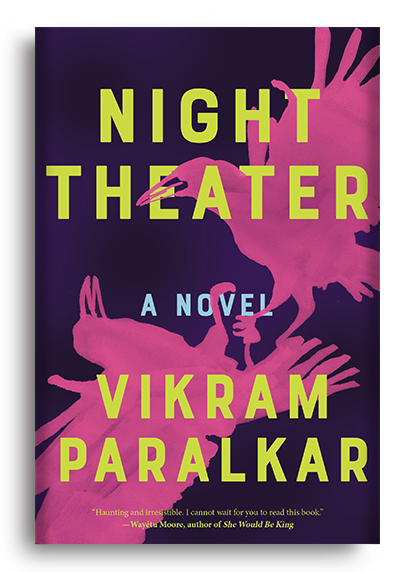 There is a whole subcategory of fiction writers who are medical doctors. They even have a name: physician writers. Some physician writers of note are Anton Chekhov, Abraham Verghese, Khaled Hosseini, and Tess Gerritsen. If you think about it, this confluence of professions is not surprising: Both lend themselves to playing God.

In Night Theater, physician writer Vikram Paralkar takes the notion of physician as god to a fantastical extreme with an eerie tale of a surgeon who agrees to operate on a family of corpses — father, heavily pregnant mother, and young son — who were murdered by bandits on their way home from a fair.

The family appears at the surgeon’s clinic in rural India just after “the sun extinguished itself on the huts in the distance and darkness dripped like pitch over the dreary village.” The father, who was a teacher, explains that in the afterlife an angel promised them with the coming dawn their “bodies will fill with blood again,” and they could live out the rest of their lives as long as they did not stray from the borders of the village.

Even as the doctor says, “But that doesn’t make any sense,” he decides to help them repair their bodies so that when they are revived, they won’t immediately bleed out from their horrific wounds and die again.

What follows is one long, exhausting night as the doctor — who, as luck would have it, was a respected big-city surgeon until his refusal to pay a bribe brought him public disgrace and a transfer to this neglected village clinic — painstakingly operates on each patient. Though they can reason, speak, and move, they have no heartbeat, no breath, no blood flow, and no pain, making the surgeries a little less complicated.

Each medical procedure is related in exacting detail, which adds authenticity to a surreal tale but also slows down the momentum of the narrative for all but the most dedicated fans of human anatomy and surgical technique. And just when it’s all over — the son’s damaged spleen removed, the mother’s slashed neck restored, the father’s punctured lung reconstructed — it is decided that the wife should undergo a C-section.

As these procedures occur, the doctor engages in philosophical discussions with the corpses and his young assistant, who is at first terrified of the dead but then comes to sympathize with them and even to be protective of them.

Naturally, they talk about the existence of God, which the dead cannot confirm. As in life, the teacher reports, there is a bureaucracy in the afterworld, and even the angels (who aren’t angels but officials) “don’t really know if God exists. They have a hierarchy, like a ladder, with steps that go on and on, the lower officials reporting to the higher ones and so forth. No one knows who’s at the very top. No one even know if the ladder ends.”

If there is a deity at the top, It doesn’t seem too concerned about rewarding the just or punishing the wicked. So removed is It from human affairs that It is unaware that some officials are messing around with the rules and offering the dead a chance to return to the world of the living.

The teacher describes an afterlife that is depressingly like mortal life, where corruption flourishes and laws are flouted. A little lie here, a cut corner there, someone must be victimized so that someone else can get ahead. Why would the officials behave like this in a place where money or property mean nothing? The teacher speculates, “Maybe it’s just [for] the sense of power.”

Among the stories of exploitation and greed, however, are glimpses of benevolence and generosity. A farmer who mistakenly injures a fellow laborer pledges to pay for his medical expenses. The assistant’s husband makes a long journey to the city for medical supplies for the corpses. Both pairs of husbands and wives, dead and living, are lovingly devoted to each other. The surgeon’s long night of labor is a selfless act of charity, pity, and hope.

Paralkar’s prose is beautiful, sometimes stunning. Though the logic of the story falters at times, as it must in a story of the supernatural, the doubts, yearnings, and simple humanity of the characters ring utterly true.

While vividly depicting human physiology in all its glistening, sinewy, gory glory, the physician writer allows the celestial mystery of the meaning of life to stand. There is no reassuring diagnosis of eternal redemption or prescription for salvation. Though the afterlife be uncertain, we know our existence is real. Be a good person, be kind to others, for that may be your only reward.

Alice Stephens is the author of the novel Famous Adopted People and writes a regular column for the Independent, Alice in Wordland.

A thrilling fictionalized tale about a real-life Black Union soldier.

How do you sell a home that no one wants? Susan Coll’s latest novel, The Stager, is a comedy set in the Washington, DC, suburbs that focuses on a family victim to a stale real estate market.