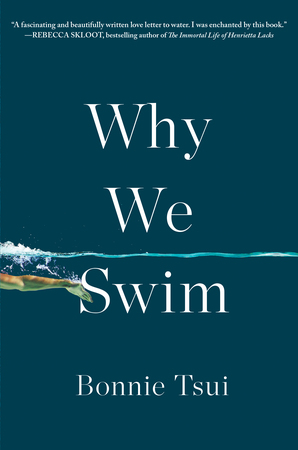 Whenever I make that first push-off from the edge of the pool — skimming my way through a liquid world, thoughts swirling to the rhythm of my body’s movements, breathing calibrated by the mechanics of the stroke — the Who song “I’m Free” thrums through my brain.

Free from gravity. Free from clothes and all the material trappings of daily life. Free from earthbound clumsiness. Free from external stimuli. Like the Who’s Tommy, I am deaf, dumb, and blind to everything but the watery environs and the unbridled flow of my subconscious.

I love swimming precisely for the solitary nature of it. It’s not that different from reading, in that the mind becomes immersed in another reality.

But not everybody is attracted to swimming for its solitary nature, as I discovered while reading Bonnie Tsui’s closely researched and entertaining Why We Swim. From swim teams to swim lessons to swim clubs, the fine art of self-locomotion through water brings people together, breaking down cultural barriers, racial differences, and socioeconomic disparities.

Though we are land-based creatures, we begin existence afloat in the womb, our cells initially going through the same developmental stages as a fish:

“Human fetuses inhale and exhale amniotic fluid in utero, helping to form the lungs. We have so-called gill slits that become parts of our jaws and respiratory tracts, the form of which are evolutionary relics of aquatic gill-breathing vertebrates.”

Neolithic cave paintings provide evidence that we have been swimming since the dawn of humanity, both to catch food and to get from place to place. Later, people swam for martial purposes; in Japan, the discipline survives in nihon eigo, evolved from the techniques that the samurai used, which Tsui asserts contributed to the early success of Japanese Olympic swimmers.

These days, swimming is done mostly for exercise, adventurism, and sport, though as long as there are ocean-going vessels, humans may have to swim for survival, as Guðlaugur Friðþórsson had to do. He worked on a fishing trawler that capsized into the frigid North Atlantic and managed to survive six hours in the water, swimming three-and-a-half miles to safety.

Friðþórsson’s story is just one of many examples in the book of how swimming can change lives, whether by saving or improving them. The author touches lightly on the stresses of competitive swimming, saying of Olympian Michael Phelps:

“The black line bedeviled him. In the chase for those medals, Phelps battled suicidal thoughts and depression. Competitive swimming is lonely. As time went on, the pool contracted, becoming a fishbowl he couldn’t escape.”

But Phelps also found his redemption in the pool, undergoing rehab for mental health issues and substance abuse, after which he went on to win more medals in Rio.

Toggling between swimmers’ personal anecdotes and researched reportage, Tsui has accumulated an impressive trove of information on the history of swimming, generously interspersed with references to important cultural works, such as the movie “The Graduate,” with its iconic pool scenes, John Cheever’s short story “The Swimmer,” and Maxine Kumin’s poem “Morning Swim,” among many others. She name-drops famous recreational swimmers, from Bill and Hillary Clinton to Lord Byron, as well as profiling humble swim club members who feel the daily call of the water.

The (rather longwinded) story of Coach Jay, who teaches a “mini United Nations” how to swim in the outdoor pool of what was once Saddam Hussein’s royal palace in Baghdad, includes a thoughtful aside on the role that public pools had in segregation and the civil rights movement, including the little-known story of Biloxi’s Bloody Wade-In on Easter Sunday 1960.

Tsui is at her most eloquent and engaging when she meditates upon the myriad ways swimming has shaped her life, starting with her own “origin story” of her parents meeting at a pool in Hong Kong. She describes the deep bonds she’s forged with other swimmers, an intense fellowship that recognizes no border other than that between land and water.

The descriptions of her diving for abalone, competing in swim meets as a youth, and setting out for her first swim across the San Francisco Bay to Alcatraz are poignant and evocative, pulling the reader along in a current of vivid prose.

Though Tsui is much more adventurous than I, we both swim to achieve what psychologist Mihaly Csikszentmihalyi termed “flow,” a trancelike state when “the self seems to fall away,” the body on automatic, knifing through the water.

As Tsui explains, “When you’ve reached fluency, that physical ease and pleasure grants your mind entry to uncharted territory. Push through the looking-glass, and you’ll discover a different way of being.”

Two new books offer a fresh look at events and important figures in the integration of Major League Baseball.