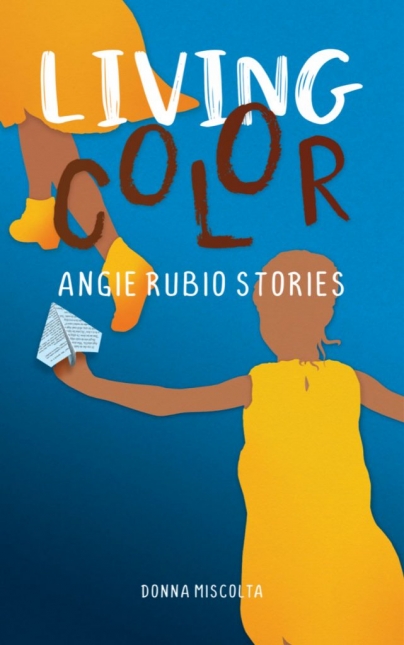 Though each chapter of Donna Miscolta’s tender, bittersweet book is a standalone story, Living Color: Angie Rubio Stories reads more like a novel than linked short stories. Following Mexican American protagonist Angie Rubio from kindergarten to 12th grade, the book features recurring characters who grow and change during the turbulent years of an America that is also rapidly transforming.

We first meet Angie, with skin like “toast, well-done,” as she enters a kindergarten class of “pink, pale, or freckled” classmates in Hawaii, near the naval base where her father is stationed. She scours the school and her neighborhood for Hawaiians, but all she sees are white people.

The closest thing to a Hawaiian is her teacher, Mrs. Pai, a Chinese American “the beige of cake batter,” with whom she has a contentious relationship, a pattern that is repeated throughout her school years as Angie’s precociousness and eccentricities frequently put her at odds with authority figures.

By second grade, Angie and the Rubio family are back in California, where she initially attends a Catholic school. Her need to please collides with the Church’s preoccupation with sin, the classroom fraught with guilt that spills into her home as she fibs about dropping her baby brother, and then about the severity of a car accident.

Finally, in a desperate bid to reconcile the contradictory messages of pleasing God and being human, she confesses a painful truth to her teacher, Sister Patrick Marie, learning a different lesson than that which Catholic education sought to instill in her.

The following year, Angie enters public school and gets her first glimpse of America’s poisonous racial divide, coming in the form of a question that many non-white Americans know all too well, “Where are you from?”

In a bid to fit in, she joins a Brownie troop. Because her parents can’t afford a new uniform, she has to make do with a secondhand one, which doesn’t escape the attention of her more affluent troop mates:

“‘Your uniform is kind of loose,’ [a] girl observed.

“‘And there’s no belt,’ said another.

“‘Well one thing’s for sure,’ Carol Elizabeth said. ‘You sure are a Brownie.’

“There was laughter and Angie, her scalp tightening, her skin prickling inside the musty uniform, laughed, too, at this joke.”

As Angie makes her way through elementary school, her need be accepted is constantly thwarted by similar microaggressions. Unlike her bookworm older sister, Eva, who turns into a sullen teenager and stops trying to do well at school, Angie studies hard and is finally placed in the “smart classes.” She starts a rivalry with Judy Wiekamp, whose mother is the permanent president of PTA, and who steals her best friend, Sylvia Rico, also Mexican American but blessed with pale skin and conventional good looks.

Bespectacled, braces-wearing, and bony, Angie enters middle school against the backdrop of the aftermath of the Watts riots and the roiling civil rights movement:

“The brown kids outnumbered the white kids, and though the white kids ruled, both groups were more or less at ease with one another…No one knew exactly how to talk or shoot the breeze or dish with the black kids, so they smiled without making eye contact, talked in all-purpose, inclusive terms when in their vicinity, and openly grooved on Motown.”

Unable to penetrate the inner sanctum of the popular kids, Angie falls in with a group of rowdy Latinas, the leader of whom makes the cheerleading squad but only as an alternate, despite outshining all the white girls at tryouts.

Entering the “unfun funhouse that was high school” in 1968, Angie gives up on fitting in and embraces her nerdiness and her ethnicity, speaking up about social injustice, writing an unconventional autobiography for her advanced English class, and taking her cousin, Little Eddie, to the prom.

Each story in Living Color is as multilayered as a mille feuille pastry, the sweetness of Angie’s intellectual quest to find her place crackling against the many slights and insults in an environment hostile to a brainy, curious, freethinking outsider.

Walking a fine line between sentimentality and disillusionment, Donna Miscolta presents a heartfelt portrait of that often-overlooked heroine, the smart girl from a disadvantaged background who isn’t a beauty and may not rise to worldly success, but who works hard to make her world a more beautiful and just place.