The grandfather of an adopted girl travels halfway around the world to discover the meaning of family. 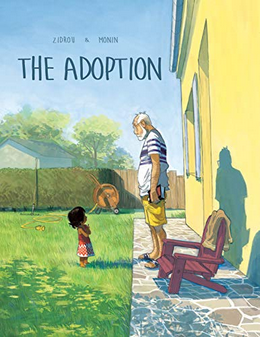 As an adoptee and a book reviewer, I greet each new book about adoption with trepidation and hope: Trepidation because too many writers have strip-mined the adoption story for cheap sentiments, trafficking in stereotypes that do real damage to adoptees; hope because maybe this time, the writer got it right.

I must admit I harbored doubts about the graphic novel The Adoption, written by Zidrou and illustrated by Arno Monin, about a grouchy old white man, Gabriel, and his brown adopted granddaughter, Qinaya, an Aymara from Peru. It checked all the boxes for a sickly sweet tale about destiny, love, and the adopted child.

Of course at first he’d be prickly and resistant to her charms. Of course she’d gradually melt the icy crust from his heart and win him over. Of course they would develop a deep bond. Of course she would teach him that love sees no color and knows no boundaries. Of course his son would get arrested for kidnapping Qinaya and go to jail.

The story begins, as so many adoption stories do, with a disaster: a magnitude 8.4 earthquake in Arequipa, Peru. Gabriel, a retired Belgian butcher, hears the news while eating his roast beef dinner and promptly forgets about it.

Cut to a sunny April day at an airport in Belgium, where Gabriel waits with his wife, daughter, and other well-wishers to greet his son, Alain, and daughter-in-law arriving from Peru after adopting a 4-year-old girl, who Gabriel describes as “a strange little Easter egg, hatched far away in the land of condors, brought back by two kind idiots.”

Gabriel’s daughter hails Alain as “heroic, pure and simple,” for adopting her “caramel-colored niece,” saving the girl from the orphanage after the quake presumably killed her parents. Gabriel keeps his distance, sneering at Alain for being too old, at 47, to raise a child.

Resentful that his son became an insurance agent instead of taking over the butcher shop, Gabriel has a strained relationship with Alain. It doesn’t help that Gabriel missed much of Alain’s childhood as he toiled “from seven in the morning to nine at night” at his shop.

But over time, Qinaya earns Gabriel’s love, Momin illustrating their shared joys like stills from a rom-com: working together in the garden, playing in the kiddie pool he buys for her, giggling at each other’s antics while brushing their teeth. Gabriel introduces his new granddaughter to his friends and carries her on his shoulders to see the Tour de France cyclists whiz by. He buys her a bike and teaches her to ride it, something he never did for his own son.

Then, on Gabriel’s 75th birthday, at a surprise party at his son’s home, the police arrive and arrest Alain for kidnapping Qinaya. She is repatriated to Peru, and Gabriel follows her.

The Adoption was originally published in France by Bamboo Press in two volumes, the second entitled “La Garúa,” for the winter fog that envelops the Peruvian coast. Fog is a handy metaphor; in adoption circles, it refers to an adoptee’s state of denial about the negative side of adoption, starting with the trauma of being separated from one’s birth family.

In this case, “the fog” is Gabriel’s state of mind as he searches for Qinaya (which means “cloud” in Aymaran) and comes to terms with the consequences of Alain’s actions, which Gabriel bitterly summarizes thusly: “They wanted to start a family, and now they’ve destroyed one.”

Adroitly homing in on small details to convey the bigger picture, the illustrator transports readers from Gabriel’s suburban Belgian neighborhood to the colonial city of Lima, where, with the help of a private investigator, Gabriel finds Qinaya. Monin’s panels are finely detailed but never too busy, colors rich but muted with dominant tones of yellow and blue, and with great attention given to light and shadow.

Author Zidrou’s plot unfolds almost entirely in dialogue, through which he masterfully conveys the psychologically intricate story. And Jeremy Melloul’s translation not only renders the French into English, but also, with the help of Monin’s artwork, makes some of the more obscure Belgian and Peruvian cultural references and practices intelligible for the American reader.

Despite being called The Adoption, this graphic novel is not really about adoption. It’s about family and the love between parents and children. The climax, communicated in six pages of drawings with only two lines of dialogue — “It’s good!” and “Yeah, it’s good!” — brought tears to my eyes.

So, in a way, it was as I feared: The Adoption is a shameless tearjerker, exploiting tender emotions on the meaning of family and the ties that bind us together. But by making adoption the MacGuffin of the story, Zidrou and Monin got their adoption story just right.