An Interview with JS Lee

The author talks social justice, transracial adoption, and her latest novel, Everyone Was Falling. 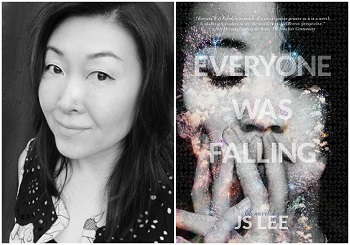 We’ve seen the headlines too many times: another senseless mass shooting. But what happens when the shooter gets away? JS Lee’s latest novel, Everyone Was Falling, takes us inside a small, mostly white town that is reeling from the traumatic aftermath of a shocking episode of gun violence and the ugly sentiments it unleashes.

Addressing issues such as gun violence, social justice, LGBTQ rights, and white privilege, Everyone Was Falling is about the aftermath of a mass shooting in a small town and the racial animosity that follows in the search for the at-large shooter. What inspired the book?

I guess you could say I was inspired by my own frustrations of living in the U.S. as an adoptee of color. Transracial adoptees tend to live in proximity to whiteness. The year building up to Trump’s election in 2016 began a long, heartbreaking era. People were becoming more emboldened to speak on things they hadn’t before, and it was horrifying. Many of my extended adoptive family and former high school classmates were open about their support for Trump — despite living in blue states.

It became clear to me that they chose their own comfort and privilege over the human rights of the marginalized. It made me conscious of how crucial it was for the marginalized to support and protect one another. With this book, I wanted to convey how race, sexuality, religion, and status affect the ways people process the same trauma — along with the cumulative effect of battling things both inside and out. Society doesn’t allow much space to understand the complexities of intersecting marginalization, or the compounded traumas that people of color frequently experience. We tend to home in on one issue at a time, as if each identity and situation exists in a vacuum.

The main character, Lucy Byrne, is a transracial adoptee born in Korea and adopted into a white family. Why did you choose to tell the story through her eyes?

I think it’s important for adoptees to speak for ourselves instead of letting non-adopted people continue to lead the narratives on adoption. I’ve committed to featuring adopted people in all of my work. While I’ve heard some claim that it’s limiting, no one says the same about stories that feature non-adopted white people. There are so many different adoption experiences, and we adoptees are best suited to tell them. This particular story was born from experiences that couldn’t be separated from Lucy’s collection of identities, while having the same impact.

There are so many important issues that you address in this novel. What is the one overarching message you’d like your readers to take away from Everyone Was Falling?

Audre Lorde said it best: “The master’s tools will never dismantle the master’s house.” For the bulk of my life, I believed that because white people are the majority in the U.S., appealing to the so-called Good White Folks would eventually lead us to justice. But history has debunked that theory countless times — and, in the meanwhile, too many are suffering. I now believe that as people of color, we need to think outside of the framework designed to keep Black, Indigenous, and other people of color down and fighting for scraps. We need to unite and get creative about achieving justice. The same can be said for adoptees, the LGBT+ communities, and all marginalized folks.

Events are unfolding very quickly these days with the pandemic, Black Lives Matter protests, and the upcoming election. A lot of the issues at the forefront of the news are the same ones you deal with in your book. In this turbulent summer of 2020, do you feel any hope for progress?

You know, as the pandemic revealed both heightened anti-Asian violence and an onslaught of attacks on Black American lives, I started to worry about how deeply it all connected to the content of Everyone Was Falling. Despite it already having been written and its release planned for so long, I was afraid to be seen as capitalizing on the timing. After sitting with it for a while, I decided that these issues will sadly always be timely.

As far as hope goes, I was recently reminded of Barack Obama’s book title, The Audacity of Hope. Audacity and hope is a good pairing. In some ways, I feel I have no logical reason to have hope beyond some much-needed but symbolic gestures. I believe there’s somewhat of a racial reckoning in progress, but we don’t know how far or how deep it will go. I’m afraid it won’t be enough. I’ve been reading, observing, listening, joining, taking action, and trying to find where I can be most effective. Some days, I feel utterly useless, and the best I can do is focus on my own health. Other days, I’m inspired by what might be possible if we collectively keep fighting on.

Your novel Keurium was about one woman’s journey through the trauma of being adopted into an abusive family; you have written children’s books; your powerful essays have appeared in various publications; and you are very active on social media. What inspires you to write? What are the different challenges and advantages in writing fiction or nonfiction?

All of my books are somewhat autobiographical. There are elements of my own traumas and challenges in each one. I prefer the long-form art and freedom of novels, but essays can also be satisfying. I never had the desire to write them beyond my blog, but people started offering me opportunities and I took them — since the topics were dear to my heart. But I’m not a journalist. I don’t have that training.

As far as inspiration goes, I’ve always had this inner drive to be heard. It’s tied to feeling silenced by my adoptive family and society at large. Many adoptees have these traits of whiteness forced upon us, and we’re supposed to gratefully live them out with no questions asked. Asian women are additionally commanded to people please. I’m also a queer woman, although that’s unseen as I’m married to a cis hetero man.

All of these intersections can feel like bricks imprisoning me. Writing is the hammer I use to knock down that wall. It’s not always easy discussing controversial and taboo topics. But each time I push beyond my comfort zone, it connects me to other generous souls. The messages that tell me my words helped validate someone — and even helped heal — both validate and help heal me. It’s like a wonderful cycle of empowerment. It makes the rest of the criticism worth it.

I have another novel in progress, but I honestly haven’t been able to focus on it since March. I suppose I’m in a state of reassessment, contemplating whether I’m making best use of this life. Like many, I’ve been depressed, and I need to prioritize some physical health issues. Once I take some time to do all of that, I’m hoping I’ll be better primed to make an impact. That’s the long way of saying: We’ll see.

Alex Grecian is the author of the long-running and critically acclaimed graphic novel series Proof. The Yard is his first novel.