‘Tis the season for joyful stories! 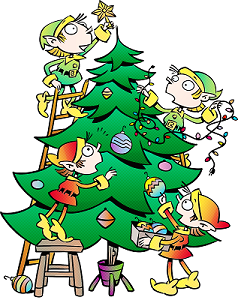 We love bloated, disheartening tomes as much as the next angsty word nerd. But if you’ve decided to embrace jólabókaflóð, Iceland’s Christmas Eve “Yule Book Flood” ritual, this year, you may be looking for something a bit lighter right now. In celebration of the long night of bookish snuggling ahead, we offer nine upbeat reads to enjoy with your eggnog and Zoloft, er, fruitcake:

Restoration Heart: A Memoir by William Cash (Constable). Reviewed by Daniel de Visé. “A few reviewers have accused Cash of name-dropping, but if Elizabeth Hurley or Boris Johnson had slept in my guest bedroom, I would drop away. Restoration Heart celebrates the redemptive power of love and renovation. It’s a good read for a certain breed of Anglophilic American, those of us who still remember the Reagan-era PBS spectacle of ‘Brideshead Revisited’ and who treasure our dogeared The Lord of the Rings paperbacks and our dusty ‘Four Weddings and a Funeral’ DVD.”

The Souvenir Museum: Stories by Elizabeth McCracken (Ecco). Reviewed by Jennifer Bort Yacovissi. “In reading McCracken — here, in her latest story collection, The Souvenir Museum — most often, I find myself laughing with simple delight at her just-so-right-ness. She has the eye, ear, and voice for capturing the essence of the world as it unfurls around all of us — trapping us, dragging us along, leaving many of us trailing in its wake. She’s right in the scrum with us, sharing it all: the absurd, the miraculous, the horrific, the utterly banal. In McCracken’s hands, it’s gold.”

Early Morning Riser: A Novel by Katherine Heiny (Knopf). Reviewed by Terri Lewis. “Imagine your college roommate, let’s call her Jane, graduates and moves away to teach in a tiny town in far north Michigan. Every few years, you get together to catch up. Because Jane has always attracted odd people, has a wry sense of humor, and is a great storyteller, you look forward to these meetings…Early Morning Riser is Jane’s story…[It is] an entertaining, fun read, with more than a soupçon of heart. If the last year has worn you down, if you miss sitting and catching up with close friends over coffee or wine, this book is for you. Pull up a chair, pour yourself a drink, relax, and meet Jane.”

Why Peacocks?: An Unlikely Search for Meaning in the World’s Most Magnificent Bird by Sean Flynn (Simon & Schuster). Reviewed by Julie Dunlap. “Sean Flynn did not yet know that the sight of a peacock feather once made Darwin sick when a neighbor’s text rattled his family enclave in North Carolina. Flynn and his wife…had moved impulsively from Boston to a farmhouse near Durham while expecting their first son. Their aging yellow cat was eventually joined by two Plymouth rock hens, but a professed agnosticism toward birds, snakes, and other animals forestalled packing the barn with a menagerie. So, few would have predicted an affirmative response to the neighbor’s message: ‘Any chance u guys want a peacock?’”

How to Be a Man (Whatever that Means): Lessons in Modern Masculinity from a Questionable Source by James Breakwell (BenBella Books). Reviewed by Drew Gallagher. “It’s clear that James Breakwell has no better idea of how to be a man than the rest of us, but part of the charm of How to Be a Man is the way it shows his engaging self-awareness that we’re only on this mortal coil a short while. We try our best. We often fail. But if we can make ‘em laugh by taking a pig to a family get-together as a guest (rather than in a casserole), then maybe we haven’t failed completely in our humanity.”

Baby & Solo by Lisabeth Posthuma (Candlewick). Reviewed by Emma Carbone. “The 1990s pop-culture references, thanks to the video-store setting and an in-theater viewing of Baz Luhrmann’s ‘Romeo + Juliet,’ and the day-to-day retail struggles — including quirky customers and a mandatory Secret Santa exchange — highlight Joel's new reality as he begins to find closure with What Was Wrong. Even readers too young to have experienced the pre-streaming world of video rental will enjoy…Baby & Solo. It’s a universal and timeless story of friendship, growth, retail employment, and the ups and downs of all three.”

The Peculiarities by David Liss (Tachyon Publications). Reviewed by Carrie Callaghan. “Liss previously spun financial malfeasance into page-turning adventure in his bestselling A Conspiracy of Paper, but The Peculiarities is a much lighter book. Thomas is an arch, slightly obtuse narrator who doesn’t realize, for example, that the women might not need as much saving as he thinks they do, and the reader is invited to gently laugh at his misunderstandings. The complex mathematical operations that come into play are described only generally, so math-averse readers have nothing to fear. Nonetheless, beyond the fun of this page-turning novel is a serious question about how society grapples with widespread technological change.”

How to Survive a Human Attack: A Guide for Werewolves, Mummies, Cyborgs, Ghosts, Nuclear Mutants, and Other Movie Monsters by K.E. Flann (Running Press). Reviewed by Drew Gallagher. “I, for one, am uncomfortable with a sometime writer for McSweeney’s so openly supporting the health and wellbeing of monsters, an effort that will surely result in the senseless killing of even more B-list actors swimming alone in dark swamps beneath harvest moons. (To be honest, based on Joseph McDermott’s illustrations accompanying the text, these creatures seem harmless; Emo Sea Monster looks like he’d fit right in at a Jimmy Eat World concert at the 9:30 Club in DC.) But Flann’s attempt at inclusiveness is to be admired.”

A Long Way from Douala: A Novel by Max Lobe; translated by Ros Schwartz (Other Press). Reviewed by Susi Wyss. “Throughout, the author tackles themes such as terrorism, child abuse, authoritarianism, the plight of undocumented immigrants, tensions between Cameroon’s Christian south and Muslim north, and homophobia. Despite these heavy subjects, Lobe has pulled off a lively, funny story… [It] is l’ambiance africaine in literary form — a delightful read that provides an inviting window into Cameroonian culture and leaves you wanting more.”

Merry Christmas from the Independent, and best wishes for a peaceful, literary New Year during which the pandemic really, truly — we mean it this time — comes to an end…

5 Books for Your Adventurous Elementary-Schooler