Family lies at the center of these insightful, acerbic, witty tales told by a master of the form. 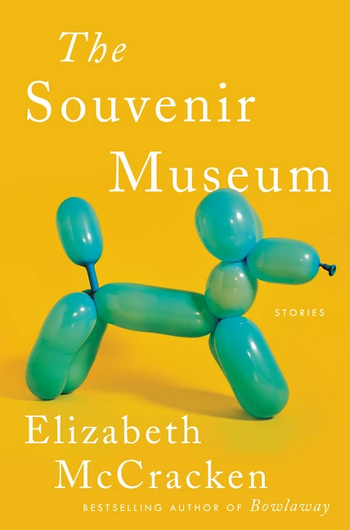 I’m absolutely certain that I am not the first reviewer to say this, but Elizabeth McCracken cracks me up. I’m even more certain now, since the week that I wrote this, McCracken tweeted, “‘You crack you up,’ one of my kids said to me, accurately.” I felt the need to respond, “In your defense, you’re not the only one.”

In reading McCracken — here, in her latest story collection, The Souvenir Museum — most often, I find myself laughing with simple delight at her just-so-right-ness. She has the eye, ear, and voice for capturing the essence of the world as it unfurls around all of us — trapping us, dragging us along, leaving many of us trailing in its wake. She’s right in the scrum with us, sharing it all: the absurd, the miraculous, the horrific, the utterly banal. In McCracken’s hands, it’s gold.

The lion’s share of that loot in The Souvenir Museum goes to Jack and Sadie, whose lives, together and separately, account for almost half its stories. Sadie, 21, who “wanted love so badly the longing felt like organ failure,” meets Jack — the only American-born-and-bred child of an English family, who, at 16, “shipped himself off to another country so that he could attend to his late puberty alone, like the injured animal he was” — on the streets of Boston in winter. He asks Sadie what her name is short for. “Sadness,” she tells him.

We initially encounter the pair as Sadie drives them through the Irish countryside late at night to the wedding of one of Jack’s older sisters, and to Sadie’s first meeting with his imposing family. We’re not sure about Jack at first — our early sympathies lie squarely with Sadie — but he wins us over in “A Splinter” and “The Get-Go,” in the latter of which he also wins over Sadie’s long-widowed mother when he finally “learned the secret of Linda, perhaps of all in-laws, which was to fold his own personality in half, and quarters, and eighths, then tuck it into his pocket.”

We follow Sadie and Jack through 20 years; in the end, we know and love them like our own frustrating and oddball relatives.

It only took me a few minutes to recall where I had previously encountered the story “Robinson Crusoe at the Waterpark”: It was one of the standouts in Reader, I Married Him, a collection of wonderfully quirky tales edited by Tracy Chevalier that all use the climactic sentence from Jane Eyre as their central conceit.

I’m not sure why this story affects me so. In it, two men take their young son to an ersatz German waterpark in Galveston, Texas, with the ghastly name of Schlitterbahn (which is, for the record — oh, my God — a real place). Bruno, the older father, totes up all the things he has given up for love, or submitted to in its name, such as coming to a place like this, which, for him, is its own little circle of hell. But he is fully aware of what he has received in return.

“Ernest was Daddy and Bruno was Pop; Ernest believed in vows, Bruno in facts and deeds. The important fact was four years old. The fact was named Cody. The fact had never-cut red hair that hung to his shoulders and was so fair-skinned as to be combustible.” As thoroughly as Bruno loves Ernest and the child they share, he cannot surrender himself to any wedding that Ernest would plan.

A waterpark is also the worst kind of place for a guy like Bruno, for whom “there was nothing between uncertainty and catastrophe…One of the things he hadn’t realized before having a child: how many ways there were to die of self-confidence.” Still, it is the place of his epiphany.

But in case the reader (me, for example) thinks of a place like Schlitterbahn as a quintessentially American horror, the title story in The Souvenir Museum whisks us off to Denmark and the original Legoland. Nine-year-old Leo informs his mother, Joanna, that Legos were invented in Denmark. When she suggests taking a trip there to visit the Vikings — so that she can track down her Viking of a lover, who long ago abandoned her — Leo negotiates a stop at the plastic-block amusement park. Par for the McCracken course, no one ends up amused.

Allowed to choose again, Leo discovers the real Denmark, “studded with little museums dedicated to misery and wealth and the unpleasant habits of men.” He loves the shards more than the whole; for him, “Looking at a piece of a thing, he might think, deduce, discover something nobody ever had, which was all he wanted in the world.”

Family is at the center of every one of McCracken’s stories, which is what makes them so achingly familiar. “A Walk-Through Human Heart” seems an apt description of a parent’s heart when they feel their child slipping away from them, to be replaced with a stranger fueled by drugs and treachery.

And how much worse is it when the loss goes in both directions? In “Birdsong from the Radio,” when exotic Leonora — so unlike the other mothers — goes from nibbling at her three children, “plump loaves of bread, delicious,” to actually biting them, we feel her slipping into feral madness. The children, in terror, begin to sleep together for protection, and her husband, “Poor Alan…in thrall to his wife,” stands helplessly by.

We know that something worse is coming, with the other mothers dissecting events “later,” and there being a mention of news cameras. The question is simply how the animals in Leonora’s nature — “not a chimera but a vivarium” — will fully manifest.

This and the other stories in The Souvenir Museum are the kind that hold up well beyond a single re-reading. How far beyond? I’ll let you know when I get there.

Jennifer Bort Yacovissi’s debut novel, Up the Hill to Home, tells the story of four generations of a family in Washington, DC, from the Civil War to the Great Depression. Her short fiction has appeared in Gargoyle and Pen-in-Hand. Jenny is a member of PEN/America and the National Book Critics’ Circle, reviews regularly for the Washington Independent Review of Books, and serves on the Independent’s Board of Directors. She has served as chair and program director of the Washington Writers Conference since 2017, and for several recent years was president of the Annapolis chapter of the Maryland Writers’ Association. Stop by Jenny’s website for a collection of her reviews and columns, and follow her on Twitter at @jbyacovissi.

A Long Way from Douala: A Novel