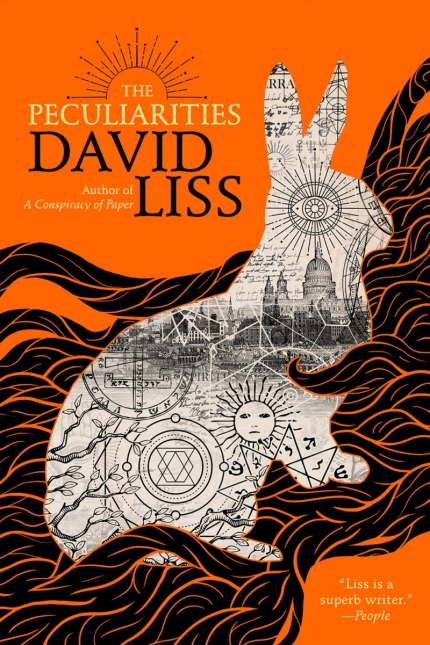 It’s the turn of the 20th century, and amid the heavy fog of London, women are giving birth to rabbits. Or so the gossips claim. Young bank clerk Thomas, scion to a banking fortune but forced by his father’s will to drudge at the lowest of the low ranks, isn’t sure he believes in the magical Peculiarities.

Though there is the matter of those leaves growing from his skin.

Thomas discovers unusual financial records at his family’s antiquated bank and wonders just what his older brother, Walter, now the bank’s director, is up to. The papers indicate trivial loans to seemingly unrelated people that the bank is in no hurry to collect on. In fact, the records suggest the bank doesn’t want to collect the owed funds at all.

Thomas spent his youth carousing, and his father discouraged him from pursuing his only substantive passion, mathematics, so he doesn’t have the insider knowledge to understand what the records mean. But the family bank has been the one constant in his motherless life, so Thomas feels obliged to investigate the small sums.

The mystery comes at the same time as rumors alleging Walter is running the bank into the ground. Even worse, Walter is insisting Thomas marry a young woman he has absolutely no interest in, apparently for reasons related to the bank. Walter, who has the charisma and aspect of a boiled potato, can’t have Thomas’ best interests at heart, and that suspicion alone is enough to urge Thomas to dig further into the bank’s affairs.

Thomas’ mundane inquiry soon spirals into the occult, and his investigation opens doors (and portals) he couldn’t have imagined. The hunt is deliciously fun, and Thomas’ evolution from self-absorbed wastrel to, well, something else, is a delight.

Along the way, he encounters self-proclaimed (and self-absorbed) magicians, secret agents for the Crown, a wise lady with a wolf head, and a smart, independent young woman who quite confounds Thomas and his paternalistic impulses. The found family he assembles is just as satisfying as such a motley crew ought to be.

Liss previously spun financial malfeasance into page-turning adventure in his bestselling A Conspiracy of Paper, but The Peculiarities is a much lighter book. Thomas is an arch, slightly obtuse narrator who doesn’t realize, for example, that the women might not need as much saving as he thinks they do, and the reader is invited to gently laugh at his misunderstandings. The complex mathematical operations that come into play are described only generally, so math-averse readers have nothing to fear.

Nonetheless, beyond the fun of this page-turning novel is a serious question about how society grapples with widespread technological change. Scholars of the occult in Thomas’ London have new ways of connecting with one another and with curious minds in other international cities. The discoveries they have made might be irreversible, no matter how much Thomas would like to avoid turning into a tree.

One of the enthusiasts Thomas encounters has no patience for wishful thinking that imagines turning back the clock. “The magical revolution is upon us,” he says. “Consider how many lives have been crushed in factories over the past century, yet who numbers the dead when we gaze upon Britain’s success? It is no longer a new world. It is simply the world.”

Thomas can’t be so cavalier, not when the skin on his legs starts toughening to bark. And when one of his primary adversaries notes, “There is no stopping progress,” the reader can’t help but feel the right response is to disagree.

Yet in some ways, the author suggests the futurists are right — that the earth’s rotation cannot be reversed. There, the parallels to our own rapidly changing society emerge and make this entertaining story into a thought-provoking one. If we cannot unplug addictive social media, unlearn gene editing, or oust invasive plant species, how can we adapt?

This novel is far too sweet and lighthearted to answer those gloomy questions, but it offers some hope that perhaps scary change can bring boons. In that case, the most constructive approach is to examine our problems with unflinching honesty and accept the consequences. We could do worse.

Carrie Callaghan is the author of the historical novels Salt the Snow and A Light of Her Own (Chicago Review Press). She lives in Maryland with her family and three ridiculous — though not peculiar — cats.