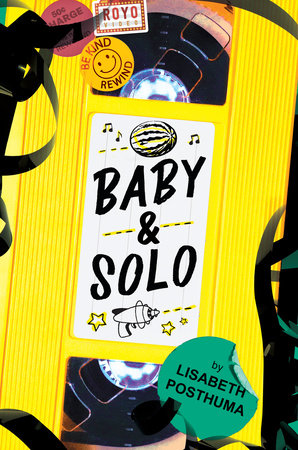 Royal Oaks, Michigan, 1996: After being in and out of mental hospitals for years, 17-year-old Joel Teague is almost Normal. He hasn't had any visible signs of What Was Wrong With Him since he was 15, he goes to therapy, and he even has a new prescription from his therapist: Get a part-time job.

While Joel's overbearing mother is wary of the advice, his father is hopeful. So is Joel; as he puts it, “Maybe all that remained between me and being Normal again was providing goods or services to my peers for minimum wage for a while. It was worth a try.”

Enter ROYO Video, where Joel is soon working part-time and is well on his way to becoming the “Doogie Howser of the video store corporate ladder.” In a shop where every employee goes by the name of a movie character, Joel is more than ready to become Solo, as in Han Solo from “Star Wars,” Joel’s favorite movie — and one that’s been forbidden in his home since the Bad Thing Happened. Along with the new name, Joel gets a tabula rasa to try making friends, working, and proving he is totally capable of being Normal.

At the store, Joel finds the routine surprisingly comforting as he gets to know his motley assortment of coworkers, including sexy manager Jessica (Scarlet), who claims “Scarlett O’Hara’s her favorite movie character” but who herself lacks “the decency to spell her name with both t’s”; the Godfather — an Asian girl who “had presence in the way someone ballsy enough to call herself ‘The Godfather’ should”; and Nicole, who goes by Baby (from “Dirty Dancing”).

What starts as a run-of-the-mill job quickly becomes something more as Joel discovers the potential for real connection with his coworkers — especially Baby, who is dealing with her own Something Wrong With Her while introducing Joel to the ins and outs of the video-rental world and improving his film education one movie at a time.

As Joel becomes friendlier with Baby, he realizes that getting to know her might also involve letting her get to know him — including What Was Wrong With Him before — a risk he isn't sure he's willing to take. As he notes:

“It’s a lot of responsibility, knowing the entire truth about a person, and I was too busy trying to become what I might have been to get involved in What Was Wrong with someone else.”

This character-driven novel slowly unspools the intensely mutual (and notably platonic) friendship between Solo and Baby as they share their vulnerabilities and help each other through a tumultuous year that includes a pregnancy and continued mental-health struggles. When new employee Maverick (Andres in real life) joins the ROYO team, Joel is also forced to confront his own internalized homophobia — a bias that came courtesy of his family history with the Bad Thing That Happened and which partially led to What Was Wrong with Joel.

Joel's first-person narration is wry and straight to the point, with careful asides hinting at his years “in and out of the psych ward” and how they impacted him (one notable example being that Joel is “hard to scandalize” now), alongside practical advice learned in therapy that he shares with both readers and other characters processing complex emotions.

After years of keeping people at a remove, Joel is terrified of connection even as he craves it — a push and pull that continues throughout the story as he begins to understand that “if you want to experience healthy intimacy in relationships, you’re going to have to be emotionally vulnerable with someone at some point.”

As the title suggests, Joel and Baby are the central point of this story, but they are far from the only worthwhile characters. The mostly white cast is fully developed and well-realized. The 1990s pop-culture references, thanks to the video-store setting and an in-theater viewing of Baz Luhrmann’s “Romeo + Juliet,” and the day-to-day retail struggles — including quirky customers and a mandatory Secret Santa exchange — highlight Joel's new reality as he begins to find closure with What Was Wrong.

Even readers too young to have experienced the pre-streaming world of video rental will enjoy Lisabeth Posthuma’s Baby & Solo. It’s a universal and timeless story of friendship, growth, retail employment, and the ups and downs of all three.

A new collection of short stories reminds us to be nice to our machines – they are in control more than we think.