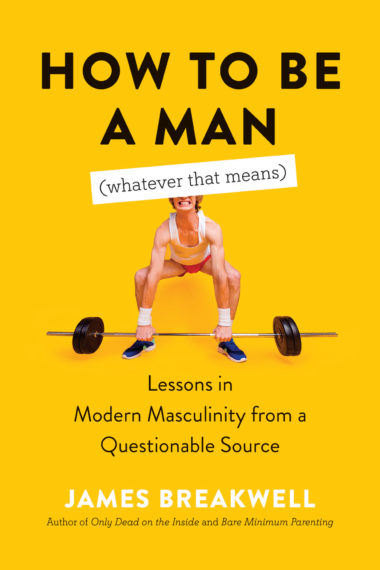 For most of history, the world has been ruled by men. On the rare occasions when women attained power, it did not end well. (See: Joan of Arc, burned at the stake before she was 20; Cleopatra, drank poison before she was 40; and Xena: Warrior Princess, canceled after just six seasons.)

Yet James Breakwell makes a compelling case in How to Be a Man (Whatever that Means) for why this masculine hierarchy is almost always destined to end in an epic goat rodeo. It’s because men are morons.

Actually, Breakwell doesn’t argue that all men are morons (it’s mostly just him), but you don’t need to read his works-cited page to recognize that he has enough evidence to support his claim.

(Just kidding. There isn’t a works-cited page. C’mon. This is a humor book.)

If the Woke Police are looking here for a meaningful discussion of masculinity, they’ll be disappointed. There’s almost nothing meaningful in How to Be a Man beyond lots of LOLs and nods of recognition that you, too, may have done some of the ridiculous things being described and that those things may have likewise ended in projectile vomiting.

“I’m not here to defend men,” Breakwell writes in his opening chapter. “Honestly, we’re sort of the worst. Though I’m not sure women are any better. The flaw isn’t with one gender, but with humanity in general. Maybe we should let bonobos take over the earth.”

I can hear the irritable hordes tweeting that they’re coming for Breakwell, a man who dares to imply women aren’t great. (Good luck finding him; the author, a professional comedy writer, uses a pseudonym since promising his wife he’d only enter the field if no one could trace any jokes back to his home and subsequently embarrass and/or murder him.)

But anyone who keeps reading quickly learns that Breakwell thinks women are superior to men. I lost track of the number of times he references the fact that women are the ones who give birth because, were the job of perpetuating the species left to men, humans would go extinct faster than dinosaurs not named Barney.

Not to mention that men tend to enjoy using fireworks in off-label manners.

Breakwell rose to fame on Twitter and now has a million followers, which has afforded him the opportunity to use his English degree to tremendous effect. He routinely posts anecdotes about how poorly he husbands and parents; one such tale shows up in a chapter titled “Pigsplaining,” which addresses the time he brought the family pig, Gilly, to Christmas.

Although he recognized the internet mob might not view a pig in the back of the minivan as PETA-approved, it was a different kind of ensuing backlash that surprised him:

“After I posted the picture, I forgot about it for a few hours while I downed several Christmas beers, partly to celebrate the birth of Jesus and partly to forget the smell in the van. Beer has many functions. At some point that afternoon, I pulled up Facebook. The picture of the kids and pig had an unusually high number of comments. I had enough alcohol in my system to read them. Big mistake. There was a tidal wave of people screaming at me, but not about the pig. She was old news. Instead, I was in trouble for buckling my kids into their car seats while they were wearing their puffy coats. According to the internet, my kids were definitely going to die.”

Breakwell, proving for the umpteenth time that he fails to recognize potholes in life and online, engaged the fray, and the situation spiraled out of control. The internet police even shared video of a puffy-jacketed mannequin meeting an untimely demise when the car it was riding in hit a fixed object at a high rate of speed, and the loose car-seat straps — caused by the puffy jacket — failed to protect the technically not alive anyway dummy.

It’s clear that James Breakwell has no better idea of how to be a man than the rest of us, but part of the charm of How to Be a Man is the way it shows his engaging self-awareness that we’re only on this mortal coil a short while. We try our best. We often fail. But if we can make ‘em laugh by taking a pig to a family get-together as a guest (rather than in a casserole), then maybe we haven’t failed completely in our humanity.