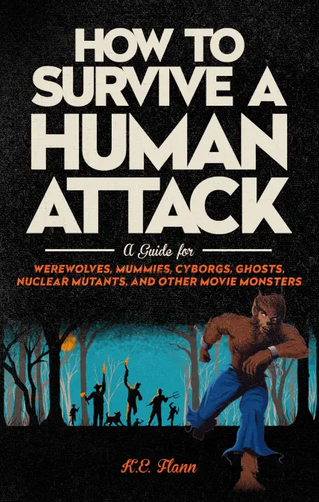 Albert Camus posited in “The Myth of Sisyphus” that the only truly philosophical question regards suicide. Whether or not man should choose life in an absurd universe is the underlying conflict of human existence according to the Nobel laureate, who was killed in a car crash in 1960. Had he lived, he likely would’ve realized another question now equally troubles mankind: How should we prepare for the zombie apocalypse?

After all, a massive assault on humanity by an army of the undead seems next in the inevitable progression of pestilence, war, and famine. Humans, however, are a plucky bunch and possess a thirst for self-preservation and beer that allows us to stock our underground bunkers with baked beans, Budweiser, and bullets. To quote the Hooters, “All you zombies hide your faces!”

Writer K.E. Flann recognizes the peril zombies face if they do, in fact, attempt to rise up and attack gun-loving Americans and tries to warn them in How to Survive a Human Attack. But this instruction manual isn’t intended solely for zombies; its helpful hints apply to movie monsters across the spectrum.

For instance, any vampires out there who purchase the book will surely benefit from Flann’s advice to move to Las Vegas instead of, say, hanging around homecoming dances:

“Casinos have no daylight, ever, and it’s a snap to blend in. Nearly everyone possesses an undead pallor. Capes are a dime a dozen, though you may wish to consider bejeweling yours to assimilate better with the locals. The blood-alcohol levels will give you a heady rush in Vegas, but beware of so-called ‘drunk-texting,’ which is communicating online while under the influence of blood-alcohol. You may communicate things that you didn’t intend. A seemingly innocent exchange that you initiate with Where you at, gurl? could lead to someone finding out where you’re at…Temper online messages by asking yourself if you’d be comfortable with Van Helsing seeing this.”

I, for one, am uncomfortable with a sometime writer for McSweeney’s so openly supporting the health and wellbeing of monsters, an effort that will surely result in the senseless killing of even more B-list actors swimming alone in dark swamps beneath harvest moons. (To be honest, based on Joseph McDermott’s illustrations accompanying the text, these creatures seem harmless; Emo Sea Monster looks like he’d fit right in at a Jimmy Eat World concert at the 9:30 Club in DC.) But Flann’s attempt at inclusiveness is to be admired.

And how many encounters with monsters stem from our own arrogance? When you’re backpacking through the foggy British highlands, for example, and the wizened proprietor of the inn tells you to beware the moors, do you listen? Of course not. You leave the path and get eaten by werewolves. It’s just science.

Your first inclination might be to approach How to Survive a Human Attack as playful fun and a welcome diversion from the very real horrors of the modern world, and you’re not wrong. There are many laugh-out-loud moments here, and Flann writes with uncanny cleverness. You don’t have to be a cyborg or a lit professor to appreciate her efforts to engage a heretofore unrepresented — and imperiled — audience.

And if we humans ever took a moment for self-reflection, we’d recognize that the number-one cause of death among monsters isn’t a silver bullet or a stake through the heart. It’s us. Movie monsters have found their Erin Brockovich in K.E. Flann.

But there remains a nagging question: Does publishing this guide for monsters pose a threat that could wipe out humanity even before climate change gets a chance to in about 40 years? It depends.

Is that weird Amazon delivery “guy” who read your copy before dropping it on your porch cackling like the Wicked Witch of the West? And does that drone on the horizon delivering your new fishing reel resemble a flying monkey soaring safely aloft as his fellow creatures of the night usher in mankind’s collapse below?

Be afraid. Be very afraid.