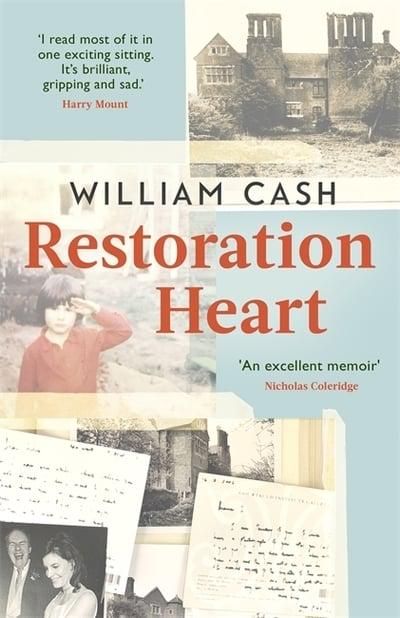 William Cash is an ambitious and talented writer who has labored to escape the shadow of his father, a prominent British politician who shares his name. That quest animates Restoration Heart, his midlife memoir. By the end of the book, first published in Britain in 2019, the younger Cash may not have earned the currency he craves, but he has found something better: love and contentment.

Cash, 54, is the son of Bill Cash, a longtime Conservative Member of Parliament and noted “Eurosceptic,” one who favors Britain’s exit from the European Union. Blessed with both pedigree and ability, the younger Cash landed a sweet assignment as Hollywood correspondent for the Times of London in 1991, not long after his graduation from Cambridge. He wrote about the rich and famous and published a twentysomething memoir titled Educating William: Memoirs of a Hollywood Correspondent.

Returning home in 1999, Cash penned a biography of Graham Greene, one of his heroes. He yearned to break out as a bestselling novelist along the lines of John le Carré. But the Greene biography drew mixed notices, and Cash settled into the life of a country squire. In 2006, he launched Spear’s magazine, a publication offered by invitation to well-heeled Britons.

Romantic unions with prominent socialites kept Cash in the British society columns through the 2000s. In 2003, he married Ilaria Bulgari, a jewelry heiress. They divorced three years later, following tabloid reports of Cash’s fling with a secretary. In 2008, he married Vanessa Neumann, a stylish Venezuelan American intellectual and diplomat who had dated Mick Jagger. That pairing ended after 15 months amid financial crisis: Cash had overextended himself on money-pit renovations of a West London flat and a sprawling country home.

That brings us to the other central character in Restoration Heart: Upton Cressett, a 16th-century manor in the central England county of Shropshire that the Cash family purchased as a fixer-upper in 1969. The property brought Cash and his parents into a peculiarly British “Cult of Restoration — restoring an old manor farmhouse, mill or ruined abbey until we are driven into the financial grave,” Cash writes.

By the time of his second divorce, Cash was dividing his time between the small West London apartment and Upton Cressett. To call the dwelling “remote” puts it mildly: The Cash family themselves “had no idea where Shropshire was.” Upton Cressett lies 150 miles northwest of London, much nearer to Birmingham, England’s unsung second city. Shropshire’s rugged beauty inspired J.R.R. Tolkien.

Despite being unable to find it on a map, Cash nonetheless dreamed of raising a family in Shropshire: “having twins, writing bestselling thrillers, buying two borzoi puppies, importing wild boar to roam around the medieval wood and peacocks for the garden.”

But he struggled to persuade a succession of romantic partners to join him there. Upton Cressett lay in disrepair. When oversight passed to Cash from his parents in 2007, he set out to gut and renovate the structure, but the scale of the project quickly overwhelmed him, and the palatial residence was never quite habitable.

“In my parents’ day, the main guest bathroom was almost fifty yards from some bedrooms,” he writes, an admission that reveals both the hardship and palatial scale of life in a derelict “Downton Abbey.”

The low point arrived in the summer of 2010. Cash was deep in love with Helen Macintyre, an arts consultant with a baby daughter revealed as the love child of Boris Johnson, the future prime minister. The romantic triangle sparked a “Notting Hill-style siege” of the couple’s lives by the British tabloids. The mother halted the relationship.

At 45, Cash was twice divorced, loveless, and childless. “In the weeks that followed,” he writes, “I fell apart as a human being. I was finished. Dead. Spiked.”

Cash found direction in completing his restoration of Upton Cressett, “the closest thing I have to something that I can always rely on to be there.” He finished the work in August 2010, shortly after splitting with Helen, the last in a long line of paramours who had lost patience in his project.

Over the following decade, Cash reinvented himself as a one-man Village Green Preservation Society, leading his rural community into battle against those who would plant unsightly wind turbines and hog farms in the Shropshire hills. The contest grew heated: At one point in Restoration Heart, Cash dismisses a pro-development neighbor with a terse, “We shall see,” the British equivalent of an unspeakable expletive.

Both the renovation and the Save Our Shropshire Hills campaign ended in smashing success. Cash emerges in the book’s final act as a vaguely mercenary West Midlands aristocrat, leading prickly Townswomen’s Guilds on tours past bedrooms where his parents had once hosted Margaret Thatcher and Boris Johnson, and where Cash himself had lodged longtime friend Elizabeth Hurley.

In one Downton-esque scene, Cash and his house staff heroically conjure tea and cakes for several dozen visitors. Just when things seem safely sorted, a grumpy tourist inadvertently locks Cash out of his home, plunging the household into “Fawlty Towers” chaos.

His house in order, Cash finally finds enduring love: In 2014, he married Laura Cathcart, daughter of the seventh Earl of Cathcart. At last, he was able to bring a new bride home to Upton Cressett. Half a decade later, they remain happily married, with two children and a menagerie of peacocks and pugs.

It’s hard to pull the whole truth from a memoir, but Cash attacks Restoration Heart with admirable journalistic remove. He quotes verbatim from letters to paramours rather than attempt to recall his feelings a decade or two later. He crafts vivid, cinematic scenes. He guesses at the motivations behind his own fateful decisions but does not presume to know them for certain. His writing is elegant and self-effacing, sometimes to the point of false modesty. (If Upton Cressett doesn’t qualify as a mansion, as Cash asserts in chapter two, then I’d like to know what does.)

A few reviewers have accused Cash of name-dropping, but if Elizabeth Hurley or Boris Johnson had slept in my guest bedroom, I would drop away.

Restoration Heart celebrates the redemptive power of love and renovation. It’s a good read for a certain breed of Anglophilic American, those of us who still remember the Reagan-era PBS spectacle of “Brideshead Revisited” and who treasure our dogeared The Lord of the Rings paperbacks and our dusty “Four Weddings and a Funeral” DVD.

Daniel de Visé is author of Andy and Don: The Making of a Friendship and a Classic American TV Show and The Comeback: Greg LeMond, the True King of American Cycling, and a Legendary Tour de France.