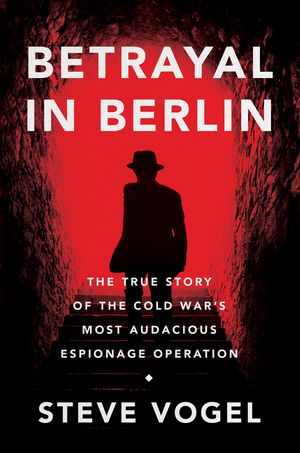 In Betrayal in Berlin, author Steve Vogel hangs his tale on an audacious joint escapade conceived by the CIA and British Intelligence in 1952: to dig a secret tunnel, a quarter-mile long, under the fortified border between West and East Berlin. The objective: to reach and bug an underground telephone cable carrying worldwide traffic to and from Soviet military intelligence officials in pre-wall Berlin.

The gods of spycraft seem to bless this longshot caper. At a moment when other intelligence sources in East Berlin have dried up, the haul from this ultra-top-secret undertaking is remarkable.

Sound like spy fiction? Just wait. Although the tunnel’s existence is known to only a handful of officials on the English and American sides, among them is British agent George Blake. And Blake, it seems, is a double agent reporting to the Soviets.

Even so — in one of the knotty paradoxes within enigmas so characteristic of the midcentury spy game — Blake’s KGB handlers choose not to blow the whistle on the tunnel. Its existence, and the real damage it’s inflicting, is shared only within a small circle of insiders.

Rather than risk drawing attention to the double agent they view as incalculably valuable, the Soviet counter-intel apparatchiks take no action at all. They don’t inform the targets of the intrusion, their own colleagues. They don’t attempt to limit the outflow of state secrets. They don’t turn the tapped cable into a channel for disinformation. This mole is too precious an asset.

In marvelous widescreen style, cross-cutting from Berlin to Washington to London, author Vogel gives us a virtually month-by-month account of the tunnel’s excavation and operation. His scrupulously detailed account never fails to keep the reader engaged, most notably in the inter-governmental runup to the mission and, later, in the oil-and-water interplay among the officials responsible for its construction and operation.

Vogel describes goings-on across the border in East Berlin in similarly gripping detail, thanks to subsequent memoirs from many of the principals on the other side.

The tunnel escapade lasts only two years, until a routine Russian patrol, in the dark about their senior officers’ look-the-other-way strategy, quite accidentally stumbles across it. The tunnel’s exposure blows up into a grand international incident just as Soviet Premier Nikita Khrushchev is blustering through an official visit to the U.S.

And then, yet another irony. After the tunnel’s demolition, George Blake’s penetration of the West’s defenses, although suspected by a few in the CIA, proceeds undisturbed for another decade and more. Matters can advance sluggishly in MI5 (or is it MI6?), particularly where a war hero and Cambridge alum is concerned.

And this is the parallel story arc in Vogel’s tale. He turns Blake’s CV into an extended narrative framing the affair in Berlin, then pushes far beyond the event to detail Blake’s subsequent favors for his Soviet spymasters.

This makes Betrayal in Berlin a hefty read indeed. The book’s sheer length and detail may put off some readers, but for those intrigued by the clandestine probes and countermeasures at the flashpoints of Cold War contention, it will captivate and inform.

Blake is eventually caught and sentenced to 42 years imprisonment. But the matter doesn’t end in Wormwood Scrubs prison. Aided by a loquacious, IRA-affiliated freelancer on the outside, Blake goes over the wall, befuddling his bumbling jailers.

With stalwart resolve, Blake makes his way across Europe, aided in part by a cooperative English family vacationing in a densely loaded caravan. He reaches his promised land and, today, in his late 90s, enjoys a comfy Russian retirement.

Throughout, Betrayal in Berlin is both a thrilling account and, sadly at times, an unconsciously comic one. Decoded in the earnest spirit of its warring principals, it’s an object lesson in tunnel vision writ large.

The Shepherd’s Life: Modern Dispatches from an Ancient Landscape

A sheep farmer's disarming chronicle of life in the fields.