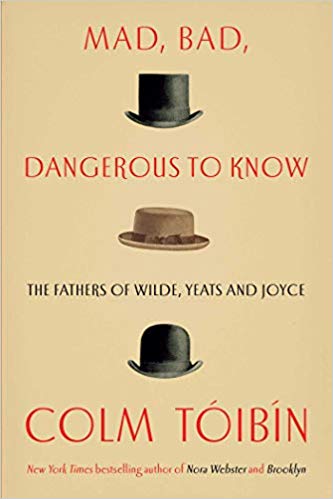 In the three essays collected in Mad, Bad, Dangerous to Know, Irish novelist Colm Tóibín takes a refreshingly oblique angle on a trio of towering literary stylists of the last era, all sons of Irish-born fathers.

In a graceful oral style befitting the book’s origin as a series of university lectures, Tóibín explores the parental imprint — sometimes biographical, often creative — on the lives and work of Oscar Wilde, W.B. Yeats, and James Joyce.

Tóibín’s earlier works touching on Ireland and the Irish diaspora, including the 2009 novel Brooklyn (later adapted for a movie of the same name), situate him well to root about in the stories of these denizens of English-ruled Ireland. It’s a compact and diverting read that reveals much about this unique realm of blurred loyalties and split political personalities.

As Tóibín tells it, Sir William Wilde (1815-1876) was a paragon of the Victorian Anglo-Irish elite. Himself the son of a physician, Wilde became Ireland’s preeminent eye-and-ear surgeon and medical innovator. He was also a celebrated archeologist, folklorist, and renowned statistician whose work on the London-based government’s census of Ireland earned him his knighthood.

But Wilde’s wife, Jane, mother of Oscar, seemed cut from a different cloth. A poet and ardent Irish nationalist, the youthful Jane, behind the mask of the mysterious “Speranza,” penned fervid — some would say seditious — essays.

(Here’s a taste: “O for a hundred thousand muskets glimmering brightly in the light of Heaven.” Not a sentiment geared to endear the anonymous author to the English authorities.)

And now for the real shocker: Tóibín supplies the details, both confirmed and rumored, of the Wildes’ sexual adventures amid the look-the-other-way tolerance of the Anglo-Irish elite. He lays out an understated chronicle of blithe corporeal rambles by both parties, of #MeToo-style pamphleteering, of libel suits, and of veiled charges of chloroform-assisted rape.

And you thought Oscar was daring.

Tóibín doesn’t try to forge a connection between his biographical abstract and the life and work of the Wildes’ son. But, come on! Who cares? It’s a fascinating backstory, immensely revealing about the culture of late-19th-century Dublin.

When Tóibín turns to John Butler Yeats (1839-1922), though, we find a bit more linkage between the life of the father and the art of the son. W.B. Yeats’ da was a painter, talented but undisciplined, prone to procrastination, and artistically indecisive.

Tóibín quotes son Willie recalling an acquaintance’s description of his father as “the painter who scrapes out every day what he painted the day before.” Lady Gregory, the Anglo-Irish folklorist and patron of the arts, offers a similar take: “I think him the most trying visitor possible…he goes his own way, spoiling portraits as hopefully as he begins them.”

For Tóibín, Yeats’ father is an aging artist impatient for his long-expected fame to arrive, spoiling for the moment when his artistic vision, for once, would hold fast.

In 1907, aged 68, the elder Yeats leaves Ireland for New York, never to return. His letters home show him “full of passionate intensity,” a phrase the son is to use in another, very different, context.

From America, the pater embarks on a long-distance epistolary courtship of an Irish woman of his own age. At moments, he sounds like a smitten inamorato, though more a Byron than a Keats:

“I love you. I can’t tell why. I dreamed of you last night, saw you sitting handsomely dressed, with your ankles showing, and the drawers quite visible… Rosa, Rosa, it makes me tremble to think of you.”

In the letters of Yeats the father, we hear a passionate counterpoint — or is it wishful reinforcement? — of the son’s despairing disaffection with the physical toll claimed by old age: “sick with desire/and fastened to a dying animal…”

Next up: John Stanislaus Joyce (1849-1931), Cork-born and middle class, the only native Catholic of the trio. A spendthrift and wastrel, Stanislaus exhausts the patience of his adult children.

Tóibín sees him as the object of James Joyce’s rebellious disdain, which gradually yields to what amounts to an artistic acceptance, even (remote) affection. He traces Stanislaus’ appearance under the thin guise of the sententious father figures in Joyce’s early fiction, and finally as the model for Stephen Daedalus’ father in Ulysses:

“In his work, James Joyce sought to re-create his father, reimagine him, fully invoke him, live in his world, while at the same time making sure that, from the age of twenty-two, with the exception of a few short visits to Dublin, he did not see him much.”

Thanks to Tóibín’s wry and learned commentary, we get to see in Mad, Bad, Dangerous to Know a great deal of these arms-length Irish fathers and the worlds they inhabited.

Bob Duffy is a Maryland author. Once, aged 6, he marched in top hat and tails in Newark’s St. Patrick’s Day parade.