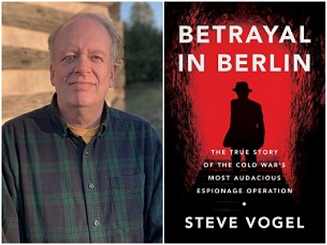 Steve Vogel's Betrayal in Berlin: The True Story of the Cold War's Most Audacious Espionage Operation centers around "Operation Gold," the CIA's plan to build a 1,500-foot tunnel into the German city’s Soviet sector to tap critically important phone lines. But it also tells the intertwined tales of George Blake, a Kremlin mole inside British intelligence, and Bill Harvey, the CIA's station chief whose espionage expertise was as legendary as his drinking.

Their stories propel the narrative to a surprise ending that rekindles the debate over who won this Cold War battle. Here, Vogel — a longtime reporter for the Washington Post — discusses how the book came to be.

Knowing your father's background as a CIA case officer, how did the story of Operation Gold become a book?

I wasn't supposed to write about my dad, and I was not trying to write about others the family knew until I wrote the obituary of Gus Hathaway for the Post. In talking to people then, I realized it was okay now to write about their world.

[Having been born in Berlin] I felt a connection to the book, and [later as] a reporter for the Army Times when the Berlin Wall came down. I ended up staying in Germany for five years, writing about the collapse of the Warsaw Pact and the Soviet Union.

George Blake's turning himself into a Soviet asset during the Korean War while a prisoner is remarkable.

He witnessed some of the worst atrocities of the war. He thought: If this is what Western democracies rely on, what does this say about Western democracy? He felt this mental and moral superiority to the captured American soldiers, [having] lived through the horrors of World War II.

Bill Harvey, the CIA's station chief in Berlin when the idea of tapping the Soviet phone lines took shape, appears to be the antithesis of the agency's image of an Ivy Leaguer. How did he get as far as he did?

What made Harvey so effective was no one understood Soviet espionage in the CIA as well as he did. He was coming from the FBI, and he had this incredible mind. He could [store and then] retrieve information and, six years later, make a connection. It was Harvey who put together a memo for the CIA director [explaining] why Kim Philby was a spy. It wasn’t James Angleton.

The engineering feats described in your The Pentagon: A History drove that story. And here again, in Betrayal in Berlin, comes the tale of an engineering achievement swaddled in secrecy.

This part of the [Berlin tunnel] story hadn't been told at all. Finding two of the three army captains who led the digging operations was really fortunate. One died within a few weeks of the interview, but his son gave me some of his papers, and that led to more interviews.

What role did the British play in the operation?

They were going to do [the phone-tapping] anyway. They had done it in Vienna to intercept Soviet calls. Harvey and Peter Lunn [a rising star in British intelligence] agreed to do it together. A good reason: the British knew how to do these taps without setting off alarms. The CIA simply didn’t have that expertise.

Why, in your book, do you re-evaluate Operation Gold as an American-British intelligence success?

The KGB realized [if it acknowledged the tunnel’s existence] it would take the CIA and the British about 20 minutes to realize that Blake was a prime suspect [in revealing the secret], so the information kept flowing from the Red Army and others.

How did you track down Blake, who has lived in Russia since escaping from a London prison in 1966?

I traveled to Moscow and brought along a Russian translator who had worked with the Post in looking for his dacha. [Although we did not receive specific directions], an elderly gentlemen said, "You might want to check out the third dacha on the left." This is where a lot of retired KGB officers have their dachas. Blake's wife answered the door, but he was too sick that day [for an interview].

What did you ask during your two telephone interviews with Blake?

I focused almost entirely on the tunnel [which Blake knew about from the planning stage], the logistics of how he passed on the information, why the KGB hadn’t stopped the tunnel, and the people he worked with on the British side on [his] escape. I didn’t really go into the details of his life. He had written on these in his memoir [No Other Choice].

Somewhat self-deprecating. I think he was always motivated by the idea he wanted to be a mover who made a difference in the world. He certainly has been recognized for this, awarded the Order of Lenin and honored by the Russian government on his 90th birthday. [In Great Britain], he is reviled in many respects [but] is far less known in the United States despite the damage he did to the CIA.

What's been your book's reception by Blake and his family?

Blake's blind, [but] his family members are aware of the book, and he is, too. I heard from one son that it is a fair account.

John Grady, a managing editor of Navy Times for more than eight years and retired communications director of the Association of the United States Army after 17 years, is the author of Matthew Fontaine Maury: Father of Oceanography, which was nominated for the Library of Virginia’s 2016 nonfiction award. He also has contributed to the New York Times “Disunion” series, and the Civil War Monitor, and is a blogger for the Navy’s Sesquicentennial of the Civil War site. He continues writing on national security and defense. His later work has appeared on USNI.org, BreakingDefense, Government Executive, govexec.com, and nextgov.com, among other sites.