How Jefferson’s Bible interpreted — and improved — the Gospels. 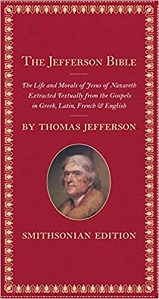 I’ve written before, in this column, about Thomas Jefferson. The general tenor of those earlier pieces is that the mythologized version of Jefferson is racist, and we need to face up to that reality. Which is to say that further study of the life of Jefferson is necessary. He remains a central figure in the history of our country precisely because of the real person he was, not the sinless world-historical statesman we want him to be.

So, with the understanding that a reassessment of his character and behavior is good and proper, the following is a slightly abashed celebration of Jefferson’s mind, his intellectual curiosity, his range and purpose, depth and capacity — all revealed in The Jefferson Bible.

A project he worked on for over 15 years, Jefferson’s Bible goes beyond the tales of miracle and magic in the New Testament’s four Gospels. Instead, Jefferson saw within the Gospels the story of a brave and singular teacher, who subverted the blond beast philosophies of the ancient world, moving societies from faith in polytheistic, heroic, conquering myths to a monotheistic, neighbor-as-thyself, civilized beckoning to love.

Although he was willing to keep people he knew intimately in the shackles of slavery, Jefferson rejected shackles for the enlightened mind. He refused to accept, in legends, myths, and religion, that Jesus of Nazareth was anything other than a man. Thus, Jesus could be treated as a philosopher and not a wine-making, water-walking, dead-raising conjurer.

So, between the years of 1804 and 1819 (from the end of his first presidential term to the middle of his retirement), Jefferson worked on cutting and pasting from various editions of the New Testament until he came up with The Life and Morals of Jesus of Nazareth.

Many people fear the overthrow of religion because, without it, everyone will go to the devil. They fear there would be no moral restraint. But in Jefferson’s capacious perspective, we can apply moral philosophy to our lives.

He wasn’t only interested in Jesus; he read the ancients (in Greek and Latin), he read French Renaissance philosophy, and he read his contemporaries, including Hume, Rousseau, Voltaire, and Sterne. And the core values that they all express is that being virtuous, behaving well, is the only way to attain true happiness.

They each say it in their own way, but, like George W. Bush after him, Jefferson was taken by Jesus’ particular call to love and forgiveness, to offer succor to those who suffer (even if the evidence of Thomas’ life is contradictory).

But he had to bring rational order to the story of Jesus’ life. The cutting and pasting he did was profoundly altering. He took lines of Mark, Matthew, Luke, and John and mashed them together to align their chronologies, and he focused on the naturalness of Jesus’ parables and the guidance of his wisdom. From Mark 4:30-32:

“Whereunto shall we liken the kingdom of God? It is like a grain of mustard seed, which, when it is sown in the earth, is less than all the seeds that be in the earth: But when it is sown, it groweth up, and becometh greater than all herbs, and shooteth out great branches; so that fowls of the air may lodge under the shadow of it.”

The great democratic principle is that each is ultimately responsible for himself. To me, this is the only reason a person can call the United States of America a Christian nation — in that we must take it upon ourselves to cultivate ourselves to become a sheltering tree in a secular society. And I daresay that’s what Jefferson wanted us to believe, too.

However, this is the same man who wrote, in the Virginia Statute for Religious Freedom:

“That to suffer the civil magistrate to intrude his powers into the field of opinion and to restrain the profession or propagation of principles on supposition of their ill tendency is a dangerous fallacy which at once destroys all religious liberty because he being of course judge of that tendency will make his opinions the rule of judgment and approve or condemn the sentiments of others only as they shall square with or differ from his own.”

Jesus taught moral philosophy to be used to achieve personal salvation, not rigid ideology to reward and punish the citizenry. The difference is between personal confidence in one’s own salvific state and social anxiety to be “faithful enough.”

Jefferson saw the duties of family and education (at least, white families) were to inculcate a moral center which could guide individuals through their own journeys. And he created this book to help.

The preface to my Beacon Press 1989 edition shows that, from 1904-1957, the book was given to every senator and congressperson at their swearing-in ceremony. There, at the highest levels of service one could perform for the State, a demythologized, secular Bible was intended to help guide these people. There are no prescriptions, just, as Jefferson said in a letter to his friend Benjamin Rush, “a system of morals…the most perfect and sublime that has ever been taught by man.”

Jefferson, like Benjamin Franklin before him, was interested in systems, and he drew them out wherever he could to educate himself and to leave a legacy of curiosity, to show a path that we could follow after him, a system of intellect and reflection to moderate us in our complicated, democratic lives.

Seems like we could use that now as much as ever.

Y.S. Fing attempts to see Jefferson from the anti-racist perspective.

A pair of columnists contemplate The Haunting of Hill House.