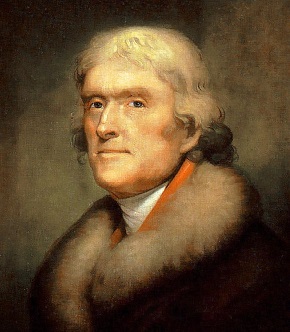 One of the key objectives in my ENGL101 classes is to teach the basics of research. In organizing this semester's courses, I chose to recapitulate my experience as a scholar of Thomas Jefferson, to share with the students the path they can take to gain knowledge, no matter the result.

I could have chosen any topic, and have previously relied on a fecund book called What the Buddha Taught. The important thing is to actually follow the path of the scholar, to learn the techniques of deep, extended study.

In this instance with Jefferson, I started as starry-eyed as any scholar could be. I idolized him and wanted to know the details of his life. He was my hero. And I encountered the book I was seeking in Dumas Malone's six-volume biography, Thomas Jefferson and His Time. Malone revered Jefferson, and he wrote Sally Hemings out of history in the same way that Thomas did.

But I didn't know that reading Malone's books. I wasn't looking for controversy, and I wasn't inclined to believe what I'd heard about Hemings. I wanted to know about the public man, and I didn't doubt Malone in the slightest. Until I aged a bit and realized, in the early 1990s, the controversy over Sally wasn't going away. In fact, everybody knew that DNA testing was going to happen sometime soon.

So I went back to more recent Jefferson biographies and found Andrew Burstein, who examined Jefferson from a different perspective: from the inside. It illuminated many things, and my mind began to change. I started to think that the private man had some bearing on the public.

Turns out, it was more the other way around.

Jefferson's mind for the public caused him to eradicate any mention of Sally and the several children they had together. There is not much more than Jefferson's Field Book to note his life with her. And when Jefferson referred to his sons Beverly, Eston, and Madison, in writing, it was as "John Hemings' assistants."

Here was a great writer who knew the power of the printed word, and who thoroughly washed the historical record of any mention on this subject, his most intimate partner for over 30 years. He gave his mixed-race sons yeoman’s training and marked in the Field Book that they ran away when he set them free in their early 20s. No other slaves in Jefferson's ownership were ever set free.

It was into this historical and verbal vacuum that Annette Gordon-Reed peered when she chose to redraw the picture of Tom's relations with Sally through the eyes of the Hemings family, who were integrally a part of his life at Monticello. There is enough historical record of the entire family and their activities around Monticello to flesh out the life Sally lived in her youth, and to which she returned after five years in Paris.

The historical record starts getting foggy when Sally, at 15, arrived in Paris to live with Jefferson and attend his daughters. Gordon-Reed suggests that a deal was made in the last months of those years between Tom, 47, and Sally, 19, and pregnant, that she would return with him and live in comfort and be his concubine, and all their children would be set free in adulthood.

Sally was actually a free citizen when she resided in Paris and could have stayed there when Jefferson left. But she returned to a most unusual anonymity, whereby everyone at Monticello knew precisely what was going on and looked the other way, a national scandal gathered and passed over her, and then she was relegated to a closet of white supremacist history.

Until Gordon-Reed brought her back out and helped us to know better.

I was greatly impressed to make this journey myself, limited scholar that I am, and encounter the little white supremacist in me who had wanted to believe Jefferson had lived a life of probity. And so I'm happy to share this journey with my students. Because ignorance brings shame, and knowing how to avoid ignorance is what education is about.