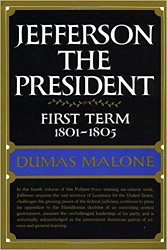 Recently, in composition class, we began discussing rhetorical analysis and critical reading and thinking. Since it was the first reading of the semester, the assignment was four pages long. But what an important four pages! These were pages 212-215 of Dumas Malone’s Jefferson the President: First Term, 1801-1805, the fourth of six volumes on the life of Thomas Jefferson, which total (in various editions) over 3,000 pages.

I don’t want to dismiss the monumental and still valuable work Malone did. I want to use these four pages to highlight the value of rhetorical analysis, which is not used simply to understand the content of what you read, but to understand the position the author takes on that content.

Malone devoted his life to his Jefferson studies and produced these volumes over the course of more than three decades. Twenty-first-century readers owe a great deal to Malone’s efforts, undertaken through an unabashed love for Jefferson.

But rhetorical analysis reveals the blind spots in Malone’s perception and further reveals an example of institutional racism that illuminates much of white America’s historical problem with race relations.

When it comes time to reckon with James Callender, Malone titles the chapter “Torrents of Slander,” which reveals that Malone gave no credit to the suggestion that Jefferson was having children with Sally Hemings at Monticello.

After dismissive and deceptive language which neither refutes nor disproves anything, Malone sums it up thus:

“A trifold answer can be given to [Callender’s accusation]. (1) The charges are suspect in the first place because they issued from the vengeful pen of an unscrupulous man…(2) They cannot be proved and certain of the alleged facts were obviously erroneous. (3) They are distinctly out of character, being virtually unthinkable in a man of Jefferson’s moral standards and habitual conduct.”

Put another way, Malone believed that (1) liars can’t tell the truth, (2) a story with some falsehoods is never true, and (3) Jefferson never thought about sex. But would Malone actually accept these three premises if he were looking at any other man’s life?

Analysis of Malone’s rhetoric reveals that he is perfectly happy perpetuating myths and sustaining the racial apartheid of his day in America. He finds it “virtually unthinkable” that a man who owns a woman, who has power over her life and death, over what happiness she might attain, would never take sexual advantage of her.

Oh, and there’s so much more to Sally’s story! But Malone gave no more space, in the entire rest of his work, to her or the children she bore with Jefferson. Rhetorical analysis reveals that the racism Jefferson exercised over African Americans — the racism that would deny any claim from them, denigrate any messenger who made a claim for them, take their names and family histories away from them, etc. — was shared by Malone.

Malone neglects to tell his reader that Sally Hemings was Jefferson’s beloved wife’s half-sister. Both Sally and Martha Jefferson were fathered by John Wayles, a slave owner in Virginia. As an indication of the intimacy between them all, Sally (perhaps 9 or 10 years old) was at Martha’s deathbed when Thomas Jefferson wept terribly and promised he would never marry again. The only slaves Jefferson set free were Hemings.

Malone knew these things. But rhetorical analysis reveals that he had a vested interest in perpetuating Jefferson’s erasure of these people, that he preferred a mythologized Jefferson to a real flesh-and-blood man. But this deception says a great deal about the culture that fostered it, as well, and the nation that went along with it for over 150 years.

When Fawn Brodie, in 1974, suggested that Sally Hemings was Jefferson’s concubine, she was savaged by defenders of the myth (including Malone). But DNA evidence later confirmed that a Jefferson was the father of Hemings’ children. Annette Gordon-Reed and other scholars have marshaled impressive other evidence that that Jefferson was Thomas. Today, Sally’s story has a place at Monticello.

I’ve noted in previous essays that, using the DNA evidence as a starting point, Gordon-Reed has formulated a de-mythologized series of conclusions in The Hemingses of Monticello: An American Family. In so doing, she has also offered a rhetorical analysis of all historical inquiry in the U.S.

Institutional racism is a blind spot for Americans. Here is where the writer needs to wake up. What we say reveals ourselves, as well as our subjects. What we don’t say reveals us, too. Writers need to be vigilant and not perpetuate myths and falsehoods. We must analyze our rhetoric ourselves for the purpose of social justice.

Y.S. Fing is worried about the future.