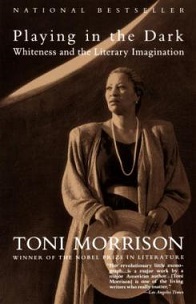 I had an epiphany late last semester while teaching Toni Morrison. It was an English 101 college composition course, but I theme our studies so I can model research methods and techniques based on a subject in which I take some interest.

In response to the terrible relations between police forces around the country and African Americans, my students and I had been examining the history of institutional racism in the U.S. We’d spent the previous 13 weeks digging into a variety of texts related to the institutions of racism in America, past and present.

I’d started the semester with discussions about the way scholars have approached Sally Hemings in the last 75 years. Dumas Malone (writing mid-century) dismissed the possibility of Thomas Jefferson’s fathering children with a slave, and rejected James T. Callender’s accusations. His choice as a scholar to do this consigned Sally to being Jefferson’s property, and nothing more than a footnote in a hagiography of Jefferson.

Andrew Burstein (writing in the 1980s and 90s) recognized the possibility of Jefferson convincing himself that, for psychological and physical health, he ought to have a concubine. (There was never any question about whether he had the power to have one.) Burstein acknowledged that the evidence pointed to Jefferson keeping Sally a secret. But he didn’t have DNA testing to prove their relations. Sally was still the object, Jefferson still the subject.

Annette Gordon-Reed (at the turn of the 21st century) had the DNA proof, and she “discovered” enough material in the archives to piece together the fabric of the lives of the Hemings in her book, The Hemingses of Monticello: An American Family. She made Sally the subject, and has provided the most bracing and healthy antidote to the Jeffersonian sphinx myth. The man kept a concubine and lived intimately with her for 37 years. They produced four children who lived to adulthood.

We’d spent much of the semester identifying this pattern of white Americans seeing, and the institutions of their state treating, African Americans as objects. We’d read Frederick Douglass’ “What, to the Slave, is the Fourth of July?” and a chapter from W.E.B. Du Bois’ The Souls of Black Folk, among others. In many ways, the readings had been a litany of horrors. On the day of my epiphany, we were looking into Morrison’s essays collected in Playing in the Dark.

The class was ready to find a solution to this ever-manifesting problem of white people misunderstanding black people. And then Morrison, speaking as a reader, dropped this, “I am interested in what prompts and makes possible this process of entering what one is estranged from in fiction — and in what disables the foray, for purposes of fiction, into the corners of the consciousness held off and away from the reach of the writer’s imagination.”

That is, how do writers succeed and/or fail at representing cultures outside their own?

As a reader, she recognized that “imagining is not merely looking or looking at; nor is it taking oneself intact into the other. It is, for the purposes of the work, becoming.” Morrison, like many before her, saw that, in a racialized society, the act of becoming the other is made nearly impossible. Her readings revealed this white people’s problem had played out in literary history as if in a racial vacuum, “without relationship to and removed from the overwhelming presence of black people in the United States.”

Although this project “rises from delight, not disappointment,” Morrison states, “My early assumptions as a reader were that black people signified little or nothing in the imagination of white American writers.” I feel Morrison at her most compassionate and heroic in this space. She saw how poorly African Americans were represented, but the emotion of it never disturbed her ultimate detachment, her ability to see how this state of things could be altered.

She “stopped reading as a reader and began to read as a writer,” and realized that “American literature could not help being shaped by…its encounter with racial ideology.”

“As a writer reading, I came to realize…the subject of the dream is the dreamer. The fabrication of an Africanist persona is reflexive,” more revealing of the author and the cultural bounds he/she adheres to, than the experience of the ‘other’ in the U.S.

So, Toni Morrison took it upon herself to remedy this limitation. She’s been a lighthouse to many authors since (none more clearly than Annette Gordon-Reed). She made subjects of her characters, to give them the dignity and actuality of their experiences, to not be blinded by the mythologizing power of institutions to how things really are.

If you want to know how a great writer thinks, read Playing in the Dark. Morrison outlines her artistic intent and methods, thereby giving us all a new, positive way to see, think, and act.