The enduring — and often private — language of tattoos 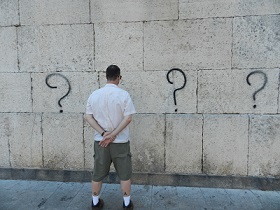 Our dear friend Betsy just texted a photo of her new tattoo. She’s a late-40s mother of three with a history of smaller, discreet tattoos. This was the most prominent yet, square on her bicep, the first initials of the names of the three children she’s given birth to and is in the lifelong process of guiding, three decorative letters intertwined in a spherical shape, bulging out of her arm. A symbolic marking on her body of the three bodies to whom she gave life.

It got me to thinking of what an amazing system an alphabet is.

Firstly, compare the English alphabet to Chinese ideographic symbolism, where the character represents an idea. Their system is dramatic, but clunky to reproduce, and requires the memorization of at least 5,000 characters. Perhaps, as Noam Chomsky says, the brain is hard-wired for that kind of work, but it makes acquisition of it as a second language most difficult.

Of course, some people have perfectly lovely ideograms tattooed on their bodies. Some don’t.

In English, we speak of graphic symbolism, where the letter represents not an idea, but a sound. This system reduces the complexity of the reproduction of the symbol, while it infinitizes the options for its use. Even though languages have fairly strict rules about grammar, spelling can be quite varied, one reason that Middle English can be hard to read. But words in graphic symbology can be readily made up, spelling can be manipulated for commercial use, or for a laugh.

That makes the use of any single letter as a standalone symbol sometimes difficult to discern. The letter “F” doesn’t mean much by itself. But put a “U” next to it, and a thought is completed. I suppose I identified with those characters in movie and song who had their knuckles inked up with “L-O-V-E” and “H-A-T-E.”

I never wanted that for myself, but I enjoy the graphic symmetry of two opposing forces struggling inside one body. And, of course, single letters can mean a great deal to an individual, like parents who want to honor their commitment to their children.

So, when it came time for me to tattoo myself 15 years ago, I chose the first two letters of my kids’ names — Q and A — and put one on each calf in thick block letters. If people see them and ask what the letters mean, I tell them, “Question and Answer.” They don’t have to know it has a different, more complex meaning for me.

One woman, in an art museum in Tokyo, asked me hopefully, “Does it mean ‘Question Art?’” I said it did. She said proudly, “I thought so.” I suppose, if you’re looking at it that way, it could mean Question Authority, or Queer As, or Qubilah and Attilah.

When a person tattoos a letter onto their body, you can be sure it has deep significance to them. They are treating their body like a book, allowing themselves to be printed upon, permanently impressed.

These days, you’ll see written aphorisms on the body; even long quotations are popular in the tattoo world. I don’t doubt others’ sincerity when they do this, but I feel like less is more. The beautiful thing about tattooing is that it doesn’t matter what it means to anyone but you.

Finally, I feel like it’s important to note that we call a tattoo permanent, but in fact, when the body decays after death, or is cremated, the tattoo will be gone, too, an evanescent memory in the minds of those who will soon themselves be deceased.

A tattoo is a mark of life in defiance of the truth of material obliteration. And that, to me, is what all writing is, a printing of the present moment’s observations, displayed to the outer world for its perusal and cogitation, fated to existential nothingness.

I can arrange these Phoenician letters any way I like. And you can understand them any way you like. We’ll call them permanent until they are gone in tomorrow’s digital tsunami. But the great consolation that we readers and writers and bodies have is that we have created a meaning in our lives which we declare to the temporal world.

Letters are symbols, that others may understand our communications. The meaning of them comes from within. The great miracle is that we can share our idiosyncratic symbolical arrangements at all.

All this talk about tattoos has inspired me. Next time you see my back, you’re likely to see Yoko Ono’s YES.

Y.S. Fing does not advocate tattoos for light and transient causes.

A meditation on Zachary Lazar’s Sway.