Read your way to a better grasp of the former Soviet Union. 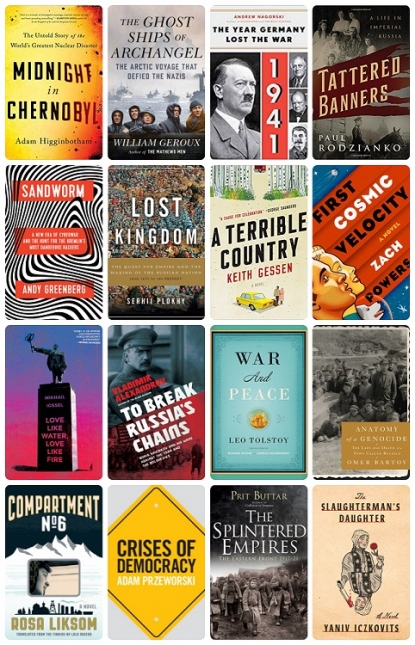 World events often outpace our ability to absorb or understand them, and that feels especially true right now. While the books below don’t deal with what’s unfolding in Ukraine, taken together, they paint a broad picture of Russia, the complex nation behind the current unfathomable, unprovoked aggression.

To Break Russia’s Chains: Boris Savinkov and His Wars Against the Tsar and the Bolsheviks by Vladimir Alexandrov (Pegasus Books). Reviewed by Elizabeth J. Moore. “But Savinkov’s luck ran out. Having escaped imprisonment or death countless times, he fell for an elaborate plot to lure him back into Soviet territory in 1924. Thinking that he was going back to join forces with a vast underground anti-Bolshevik movement, he was arrested almost the moment he stepped across the border. At his trial, Savinkov seemed to recant his anti-Bolshevik views for reasons that remain unclear today. Initially condemned to be shot, he was instead sentenced to imprisonment. But in spite of extraordinarily humane treatment, he committed suicide in May 1925.”

The Ghost Ships of Archangel: The Arctic Voyage that Defied the Nazis by William Geroux (Viking). Reviewed by Elizabeth J. Moore. “Stalin, who was the primary beneficiary of the convoys, was the perpetrator of one of the most brutal and hellish regimes in history (aspects of which were witnessed firsthand by the convoy members who made it to Archangel). Roosevelt, in his eagerness to keep Stalin as an ally, forced the convoys to run during dangerous 24-hour daylight. And Churchill put too much trust in Pound and, to the end of his life, refused to take any responsibility for the fate of convoy PQ-17.”

First Cosmic Velocity: A Novel by Zach Powers (G.P. Putnam’s Sons). Reviewed by Russell J. MacMullan Jr. “During the 1960s, I held simplistic if not stereotypic views of our Cold War rival, the U.S.S.R. Of its space program, I perceived monolithic secrecy, propaganda, and an intentional association between utopian socialism and its ‘victorious’ space exploration by mythic Russian heroes. In his debut novel, First Cosmic Velocity, Zach Powers plays on this link between that program and the Cold War. Using the likes of Khrushchev, space patriarch Konstantin Tsiolkovsky, and actual locations and events, Powers’ historical novel tells the story of the feverish intensity of launching cosmonauts into the heavens.”

War and Peace by Leo Tolstoy. Covered by Dorothy Reno. “If English is envied on account of its outsized vocabulary and grammatical flexibility, Russian is adored for its rich nouns (among other elements), which convey simultaneous meanings across a single word. The ‘Mir’ in Voina i Mir (War and Peace) translates to ‘peace,’ but it also means world, society, quietude, village, kingdom, universe, universal, and more. And, so, just as Tolstoy communicates his multiple understandings of the war between Russia and France, the differences between East and West, the battles between men and women (and men and men, and women and women), the chasm between peasant and noble, and the gap between personal transformation and knowledge, so, too, has he magnified those delicate absolutes in the enduring quest for serenity.”

Sandworm: A New Era of Cyberwar and the Hunt for the Kremlin’s Most Dangerous Hackers by Andy Greenberg (Doubleday). Reviewed by Tom Glenn. “Behind many of Russia’s cyberwar efforts was a unit given the name ‘Sandworm.’ Repeated hints in the makeup of the malware pointed to the identity of Sandworm as a Russian government entity. Sandworm was finally identified in late 2018 as an element called 74455, a subordinate unit of the Russian government’s GRU. (‘GRU’ is the English version of the Russian acronym ГРУ, which means Main Intelligence Directorate. The GRU is Russia's largest foreign intelligence agency.)”

Crises of Democracy by Adam Przeworski (Cambridge University Press). Reviewed by Sunil Dasgupta. “As we look around the world today, neither the income threshold nor repeated successful elections seems to be as protective of democracy as predicted. The United States, the oldest democratic nation, and one that’s far above the defined income threshold, seems to be walking right into the hole. Advanced industrial societies in Europe are already seeing the erosion of traditional political parties, the rise of right-wing forces, and a loss of confidence in democratic politics. Germany, Italy, Greece, Spain, and, to a lesser extent, France and Britain, are experiencing these trends mainly vis-à-vis anti-immigration politics. And other countries thought to be on the path to democratic consolidation — Russia, Turkey, Poland, and Hungary — have seen backsliding.”

A Terrible Country: A Novel by Keith Gessen (Viking). Reviewed by Nathan Chadwick. “Andrei Kaplan is coming back to Russia, but it is not to a place he knows very well. Born in Moscow in the 1970s, Andrei, at the bequest of his scheming brother, Dima, is returning to his birthplace to take care of his ailing grandmother, affectionally called Baba Seva. It is 2008, and Putin has not regained power yet. There is a strong pull for Andrei in Russia. His life in the States is in disarray. He has lost his job, his girlfriend, and his parents. There is little left to cling to in America, and change is a great driver even if it means sharing space with his grandma and enduring, to his chagrin, a lack of good Wi-Fi and recreational hockey. Andrei sees an opportunity to start over and become the Russian he has never truly been.”

Tattered Banners: A Life in Imperial Russia by Paul Rodzianko (Paul Dry Books). Reviewed by Charles Caramello. “Although slighter in stature than a great novel, Tattered Banners has the gravity and tonal swings of one. It opens as a charming and witty stroll through Eden; offers a stirring account of the Fall; plunges into Hell with a grisly and graphic reconstruction of the torture and murder of the imperial family; and resurfaces with a dispassionate denouement. It is Paradise Lost as told by Dostoevsky.”

The Slaughterman’s Daughter: A Novel by Yaniv Iczkovits; translated by Orr Scharf (Schocken Books). Reviewed by Olesya Salnikova Gilmore. “Indeed, the setting is a rare one for historical fiction; while the years before the Russian Revolution are well-trodden ground, the experience of the Jewish people and their discrimination under the czarist regime is a uniquely impressive offering, particularly since that experience centers around a woman magnificently expert at ritual slaughter. The novel is at once a beautiful fable and a philosophical meditation on a people, their history, and their place in society.”

Anatomy of a Genocide: The Life and Death of a Town Called Buczacz by Omer Bartov (Simon & Schuster). Reviewed by Thomas Kühne. “As these documents reveal, neither the killers nor their associates suffered guilt over the atrocities they participated in. Even more disturbing than the portraits of violence is Bartov’s spotlight on the ‘ambivalence of goodness,’ the moral quagmire that embroiled the local Christians and eventually swallowed the Jews. Not all Ukrainians or Poles hated the Jews; some offered help and tried to hide their doomed neighbors. But their motives were complex and sometimes accidental. A dangerous brew of greed, opportunism, and fear spurred individual actions which sometimes transformed selfless rescuers into clandestine betrayers and willing collaborators.”

Love Like Water, Love Like Fire by Mikhail Iossel (Bellevue Literary Press). Reviewed by Mike Maggio. “His new collection of stories, Love Like Water, Love Like Fire, features vignettes based on Iossel’s memories of growing up in Soviet Russia. As such, they are not quite fiction. Neither are they autobiography. Instead, they are what the author called, in an interview with Fiction Writers Review, autofiction: stories based on memory, which is ‘imagination pointing backwards.’ In fact, most of these autofictional stories have no narrative arc and, while there is sometimes conflict, there is often no apparent resolution. They simply are, and they may leave the reader feeling deflated.”

The Splintered Empires: The Eastern Front 1917-21 by Prit Buttar (Osprey Publishing). Reviewed by John Grady. “Buttar's depictions of corollary events in tsarist Russia — with its exhausted armies and mutinous sailors, collapsing industries and pitiful rail lines, plotting revolutionaries (including Trotsky and Stalin) and self-proclaimed saviors like Alexander Kerensky and Gen. Lavr Kornilov — are among the strongest points in this book. The confusion among Lenin's Bolsheviks when they finally made their successful grab for power in Petrograd is borderline slapstick on its surface, though ultimately tragic.”

Compartment No. 6: A Novel by Rosa Liksom; translated by Lola Rogers (Graywolf Press). Reviewed by Holly Smith. “Imagine delivering the eulogy for your former captor. True, he’d once kept you chained to a wall, depriving you of decent food, clean water, and freedom. But in his defense, he did give you a place to live all those years, and there was indoor plumbing. Compartment No. 6 feels a lot like that eulogy, only it’s written not for a person, but a place: the Soviet Union. Set during the 1980s in the twilight of the U.S.S.R., the slim novel seeks to bury Mother Russia and to praise her. It’s a delicate trick, but one that Finnish author Rosa Liksom pulls off with subtlety and skill.”

Midnight in Chernobyl: The Untold Story of the World’s Greatest Nuclear Disaster by Adam Higginbotham (Simon & Schuster). Reviewed by Sunil Dasgupta. “The Chernobyl Station, named after a small 12th-century town, was a set of four large nuclear reactors designed to produce 4,000 MW of electricity, 10 percent of Ukraine’s total electric power. How that promise turned into history’s worst nuclear disaster, the massive and bumbling emergency response that followed, and the lessons learned is the subject of Adam Higginbotham’s Midnight in Chernobyl. From the greenfield choice of the land between the Pripyat and Dnieper rivers, to the protective dome hurriedly built over the smoldering ruins of reactor four, Higginbotham re-creates the tragedy in intimate detail.”

Lost Kingdom: The Quest for Empire and the Making of the Russian Nation by Serhii Plokhy (Basic Books). Reviewed by Earl M. Irving. “Over the years, Putin has made the case that Russian identity was under threat in Ukraine, accusing the Ukrainian leadership in July during the Group of 20 Summit in Hamburg of ‘trading in Russophobia.’ What, then, is Russia, and who are the Russians, and why might Putin believe Russians and Ukrainians are ‘practically one people’? In his engrossing Lost Kingdom, Harvard professor Serhii Plokhy chronicles the search for a national narrative that grew out of medieval Kyiv Rus’ to encompass, at its zenith, one-sixth of the world’s landmass.”

1941: The Year Germany Lost the War by Andrew Nagorski (Simon & Schuster). Reviewed by Eugene L. Meyer. “Hitler and Stalin loom over it all, with President Franklin D. Roosevelt and Prime Minister Winston Churchill important but lesser figures in Nagorski’s gripping drama. Hitler’s prison work, Mein Kampf, may be best remembered for its extreme anti-Semitism, blaming Germany’s defeat in World War I and every other imaginative ill on the Jews and foreshadowing the Holocaust. But Nagorski recalls a less noted passage in which Hitler describes Stalin’s Soviet Russia as the biggest threat and vows one day to conquer it.”