A Terrible Country: A Novel 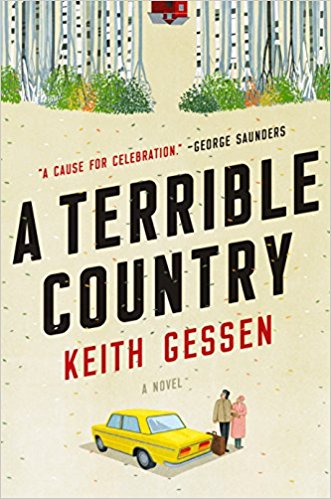 Keith Gessen has excellent timing. His new novel, A Terrible Country, lands amid a strong national interest in his birth country, Russia. This is the kind of book that publishers rush into the hands of readers while the demand is high. It would be wrong, though, to treat this as just another Soviet story.

While politics act as a force in much of the novel, it is not the politics of world leaders, but rather those of the everyday citizen; specifically, the split-identity wrought by immigration. Gessen seems to ask: Where do we find ourselves when who we are stretches across oceans and continents?

Andrei Kaplan is coming back to Russia, but it is not to a place he knows very well. Born in Moscow in the 1970s, Andrei, at the bequest of his scheming brother, Dima, is returning to his birthplace to take care of his ailing grandmother, affectionally called Baba Seva.

It is 2008, and Putin has not regained power yet. There is a strong pull for Andrei in Russia. His life in the States is in disarray. He has lost his job, his girlfriend, and his parents. There is little left to cling to in America, and change is a great driver even if it means sharing space with his grandma and enduring, to his chagrin, a lack of good Wi-Fi and recreational hockey.

Andrei sees an opportunity to start over and become the Russian he has never truly been.

Gessen creates terrific opportunities for Andrei to discover Russia and employs “outsider humor” to great effect. Andrei struggles with the language, with disastrous attempts at joining local hockey teams, with the chaos and danger of Russian nightlife, and, most importantly, in his attempts at finding companionship. He is his own foil, a character we genuinely feel for and identify with.

Andrei’s initiation into a group called October, named after the Communist revolution of 1917, is his most significant attempt at becoming part of the culture. It allows him to find the companionship he craves and makes him believe that he, too, can become Russian in character instead of just birth.

Gessen, for his part, does a remarkable job of showing us the fault in Andrei’s plan. The last third of the novel is a testament to what it means to try to belong. Andrei finds out that belonging cannot be superficial, that it’s a dynamic, relational process involving more than just the needs of the person who wants in.

Andrei, despite his best intentions, cannot change his identity, nor the identity of the country he desperately tries to assimilate into. It is a heartbreaking epiphany, which Gessen builds out masterfully.

The best moments in A Terrible Country happen between Andrei and Baba Seva. She is a link that connects the Russia of the past with Andrei’s parents and with himself. She serves as an excuse for Andrei to stay in the country and a grounding testament to what Russia once was. Andrei begins the novel as her roommate, but they grow to be a real family.

The bond between the two strengthens as Baba Seva starts to fail. She is the one who repeatedly tells Andrei that Russia is “a terrible country” and that he should leave. A fall down the stairs begins to unmask the struggles of the country, which brings new insights for Andrei. As he begins to integrate more with the locals, Baba Seva begins to deteriorate into dementia.

As Gessen heaps struggle after struggle onto his protagonist, it becomes clear that birthplace and language do not equal being local. Russia and Andrei bleed each other, and Andrei must ask himself who he truly is and where he really belongs. It is not an easy answer, and it is not a pleasing answer, but Gessen courageously lifts the mask with a complex sense of humanity.

A Terrible Country has been years in the making. Gessen’s first novel, All the Sad Young Literary Men, was published a decade ago. In the meantime, he has become a leading literary voice in the United States, helping to create a connection between his birth country, Russia, and his home country, the United States. With its humor, empathic characterization, and great timing, this book is a hell of an important read.