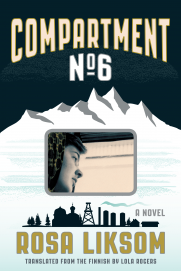 Imagine delivering the eulogy for your former captor. True, he’d once kept you chained to a wall, depriving you of decent food, clean water, and freedom. But in his defense, he did give you a place to live all those years, and there was indoor plumbing.

Compartment No. 6 feels a lot like that eulogy, only it’s written not for a person, but a place: the Soviet Union. Set during the 1980s in the twilight of the U.S.S.R., the slim novel seeks to bury Mother Russia and to praise her. It’s a delicate trick, but one that Finnish author Rosa Liksom pulls off with subtlety and skill.

In the story, a long, hulking train crawls endlessly eastward through Siberia and onto Mongolia. Aboard, “the girl” — a young woman from Finland — is trying to put thousands of miles between herself and a failed affair back in Moscow. She chooses an empty compartment, number six, hoping for solitude and an uneventful journey.

To say the former soldier is rough around the edges is insulting to edges; he’s coarse, menacing, vulgar, sullen, and spectacularly drunk most of the time. He’s also prone to telling long-winded tales of his exploits both in battle and in bed, and his horrified fellow traveler is powerless to stop him.

(This is still communist rule, and the girl’s request to switch berths is met with a stern, “It’s against the law to change compartments,” and then silence when she can’t afford a sufficient bribe to do it anyway.)

The man dominates their close quarters, cursing his wife back home while constantly propositioning the girl in front of him, always to no avail. “The man looked at the girl with a wary smile. ‘I’m sorry, my girl. The devil got into me again. Lucifer himself. I just have such the urge to fuck. Go back in so you don’t catch cold. Let me know when I can come in.’ …The girl smiled in token of a sort of dry understanding and went into the compartment. She took a bottle of nail polish remover out of her bag, emptied it into his vodka glass, and slumped onto her bunk. She liked the man’s Gagarin smile. She fell asleep to that, hungry, with all her clothes on.”

Theirs is a complex détente, filled with exasperation, profanity (always his; the girl is quoted just once in the book), and shared samovars of tea. The man rarely eats his sausages, Rossiskaya cheese, onions, and black bread without offering her some. He reads Pravda aloud and often speaks to her with fatherly concern; she gazes out the window and listens to Louis Armstrong and Dusty Springfield on her headphones.

The train makes multiple stops — scheduled or not — leaving passengers with hours or days to kill. Each city feels more depressing than the last, with packs of starving dogs, sheets of pelting sleet, oppressive grey clouds, and Stalin-era cars rusting under towering snowdrifts.

It’s in her descriptions of these suffocating places that Liksom best paints the torpor and despair of a nation. The Siberian chill freezes eyelashes and lips; the insides of buses are no warmer than out; at a public cafeteria, the girl is given a mayonnaise salad that contains only mayonnaise. Prohibition is in place, yet citizens’ veins pulse with contraband booze. The sky and forests are stunning. The Northern Lights dance above. There are sneers and smiles. The train moves on.

“Novosibirsk is left behind…The stench of rotting steel pushing in through the open compartment windows, left behind. The faint scent of pale carnations, the sturdy aroma of garlic and the acrid stink of the sweat of forced labour, left behind. Novosibirsk…industrial city of lost dreams watched over by sooty, modern weather-maimed suburbs, the squalid carcasses of thousands of prefab buildings are left behind. The creaking grates, the lights of blind factories sweating in forty-below weather, the corpses of tortured cats near the hotel, the felt boots and brown wool trousers, the consumer cooperatives, the exhausted land, Novosibirsk is left behind.”

Liksom’s great achievement is that the portrait she paints is difficult for the reader to leave behind. Although the plot, such as it is, is slow (like the train), the resilient characters move it forward — none more so than the main character, the Soviet Union.

“He rubbed his chin for a moment. ‘There are thousands and thousands of truths,’” writes Liksom, quoting the man. “Every fellow has his own. How many times have I cursed this country, but where would I be without it? I love this country.”

Once in a while, whether it’s via an extra peppery bottle of vodka, a roof that doesn’t leak, or a bowl of soup that’s only cold because it’s meant to be, the country loves him — and the girl — back.