The Slaughterman’s Daughter: A Novel 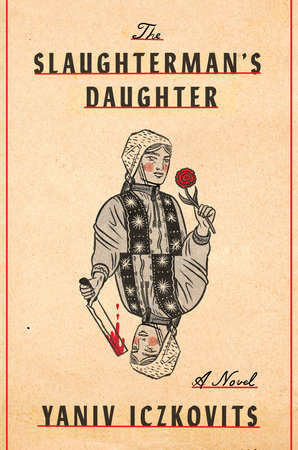 It is 1894, and the Russian Empire is on the eve of cataclysmic change. But in the Pale of Settlement, the only territory where the permanent residency of Jews is allowed, revolution is the last thing on anyone’s mind because a family dispute is brewing. A husband has abandoned his wife and three children, and the wife’s sister, Fanny, is left to pick up the pieces of the domestic tragedy.

As a girl, Fanny learned her father’s profession of ritual slaughter and so, unlike other women, is very adept with a blade. The people call her vilde chaya, wild beast.

Despite the fact that Jews are mostly forbidden from traveling beyond the Pale, Fanny leaves her comfortable home, cheesemaker husband, and five children “at two hours past midnight” to track down her brother-in-law in faraway Minsk and bring him back — no matter the cost — with the unexpected help of a mute ferryman and ex-soldier, Zizek Breshov.

Fanny keeps a knife tied to her right leg, a knife that becomes her weapon on the perilous, robber-ridden roads of czarist Russia. It saves her and ultimately dooms her as dead bodies pile up in her and Zizek’s wake, and a lame secret police commander with something to prove, Colonel Piotr Novak, takes off after the pair in hot pursuit.

Fanny bewilders her pursuers and co-conspirators alike. She is “a mysterious fiend of a woman,” a “crazy witch,” a “Jewish Joan of Arc,” with an “attractive ugliness.” A “deep scar on her left arm leaves no doubt: she is a lioness, a fighter.”

The fact that Fanny is a woman, and a remarkable one at that, throws off the police, transforming the seemingly simple domestic dispute into a murder investigation and then a confrontation between the police and the czar’s army (when that army hides the fugitives out of loyalty to Zizek).

Colonel Novak himself admits to presuming that Fanny, “being a woman…would be incapable of murder.” He questions:

“Is the entire Okhrana on high alert because of this ridiculous story? Impossible. Women do not leave their homes with knives on their thighs in the middle of the night to teach a wayward brother-in-law a lesson.”

What Novak and the other men fail to understand is that Fanny’s journey transcends her reason for leaving home. Her journey may have been sparked by her sister’s heartbreak — in her husband’s words, she “wants to mend the entire world” — but it turns into a quest for her identity as a woman, as a mother, as a Jew, as a human being.

It is also a quest for independence and individuality, to go “where no Jewish woman has set foot before.” Fanny often recalls her own mother, who died being afraid to step outside her room and live. Fanny refuses to be afraid. She wants to live fully, wishing “she could tear down the boundaries of her fate and mutilate the face of anyone who stood in her path to freedom.” She will challenge robbers, policemen, and an entire army before she puts down her knife.

To imagine her “wielding a knife used for slaughtering chickens,” leaping upon necks and slashing throats, is both humorous and ridiculous, real and make-believe, much like the voice and tone of the novel itself.

But Fanny’s journey must not be taken literally. Beyond the humor and philosophy in The Slaughterman’s Daughter is a reckless woman gambling carelessly with men’s lives for the sake of her own validation. The price of this journey of self-discovery is steep: a pile of dead bodies, some who were honorable men; an innocent town’s suffering under police blockade; and the sad division, maybe even downfall, of at least two families. Not once does Fanny feel any responsibility or remorse.

This story should be treated as the fable it is — a celebration of one woman’s defiance of a people cowed into meekness and conformity by the czarist regime; of a country, a “place [that] is doomed”; and of a world “on the brink of complete annihilation.”

Indeed, the setting is a rare one for historical fiction; while the years before the Russian Revolution are well-trodden ground, the experience of the Jewish people and their discrimination under the czarist regime is a uniquely impressive offering, particularly since that experience centers around a woman magnificently expert at ritual slaughter. The novel is at once a beautiful fable and a philosophical meditation on a people, their history, and their place in society.

At times, the story is bogged down by extraneous detail. While woven into its rich tapestry is an impressive cast of characters, their constantly shifting points of view slow down the pace, immediacy, and beauty of Fanny’s quest, hiding it beneath layers of meandering description and blocks of exposition, and dimming the bright, insistent light that is Fanny.

For, in the end, this is her tale: her triumph and her failure, her search for identity and meaning, her desire for purpose beyond that which society, religion, and men have carved out for her.

Originally from Moscow, Olesya Salnikova Gilmore is a historical and fantasy fiction writer and lawyer living in Chicago. Her writing is inspired by Eastern European folklore and history.