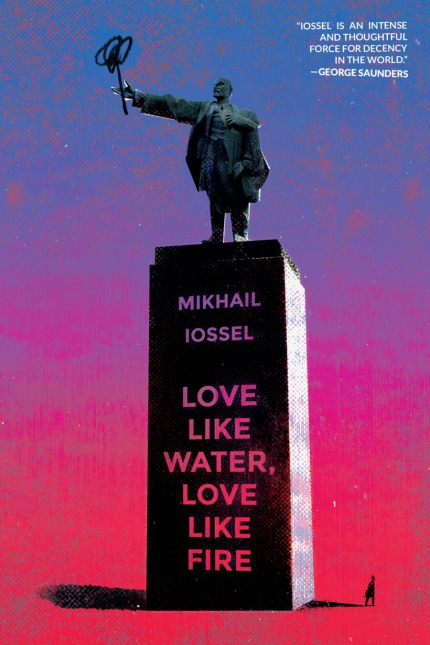 When you think about Russian literature, the names of some of the world’s greatest writers inevitably come up: Dostoevsky, Tolstoy, Gogol, Pushkin, and, more recently, Solzhenitsyn. The list goes on, spanning much of the 19th and 20th centuries. And now, in the 21st, along comes Mikhail Iossel, a Russian Jew who grew up in Leningrad under communist rule and who immigrated to the United States in 1986, just prior to the fall of the USSR in 1991.

Before making his way to the U.S., Iossel was one of the samizdat writers: underground dissidents who wrote against the Soviet regime, often at their own peril. After coming to this country, he went on to write in English, producing such works as Every Hunter Wants to Know, Amerika: Russian Writers View the United States, and Rasskazy: New Fiction from a New Russia.

His new collection of stories, Love Like Water, Love Like Fire, features vignettes based on Iossel’s memories of growing up in Soviet Russia. As such, they are not quite fiction. Neither are they autobiography. Instead, they are what the author called, in an interview with Fiction Writers Review, autofiction: stories based on memory, which is “imagination pointing backwards.”

In fact, most of these autofictional stories have no narrative arc and, while there is sometimes conflict, there is often no apparent resolution. They simply are, and they may leave the reader feeling deflated.

The most compelling is the title story, which takes place in 1939, just after the Stalinist purges which, it seems, are not yet entirely over. The main character, a young woman whose husband is an up-and-coming Party activist (and who is, apparently, also the author’s grandmother), is awake late one night and notices a black car pull into the courtyard of her communal-apartment building.

Two soldiers emerge, along with a mysterious man wearing a trench coat and fedora. They are there, it seems, to “disappear” someone, and her fear is that they have come to arrest her husband, though he has not done anything wrong.

There is a great deal of tension as Iossel takes us through the woman’s mental state, a mixture of fear, speculation, and the spurious ideals with which she has been brainwashed. Through her anguish, we come to understand the level of suspicion instilled in the Soviet citizenry at the time. Whom does one trust? Friends? What about neighbors? And if a man is disappeared, will he eventually turn on his own wife?

Amid these ruminations, we hear the ominous footsteps of the men as they slowly make their way up the stairs and come closer to the woman’s apartment. This juxtaposition of what’s going on outside her mind with what’s going on within it galvanizes the reader’s attention as this fine example of autofiction builds to a climax.

If only the other stories were as well crafted. Unfortunately, most lack any real emotional stakes. Their saving grace is that they illuminate much about Soviet society hidden from the West, including the USSR’s rampant anti-Semitism and Holocaust denial, and its view of America as not only an imperialist enemy, but one in decline. All of this casts in stark relief the rose-colored picture of a glorious, future-minded Soviet Union that Russian citizens have been led to believe in.

Throughout the collection, Iossel’s prose is often long-winded and choppy, as in this passage from “Flying Cranes”:

“Perhaps Tolyan — a walking time bomb, an accident looking for a place to happen, in the words of some grown-ups in our communal apartment, and an overflowing receptacle of his alcoholic parents’ mutual hatred, as my mother put it — should not have pushed her in the back quite so energetically that ill-conceived morning, in an attempt to convince her to kneel down and start praying to Lenin instead of God…”

And the sentence is not yet finished!

One wonders if the author is constructing such passages for a reason (a convolution of meaning that represents Soviet-style brainwashing, perhaps?) or if he is, instead, simply emulating the thought patterns of his autofictionalized characters. Regardless, such writing can leave the reader befuddled.

The title story in Love Like Water, Love Like Fire is definitely worth a read, maybe even two. The rest of the book, however, might best be described not as a collection of short stories so much as a fragmented look into everyday Soviet society — a way of life that few in the West have ever seen.

Mike Maggio’s newest collection of poetry, Let’s Call It Paradise, will be released this summer by San Francisco Bay Press.