The Gilded Page: The Secret Lives of Medieval Manuscripts 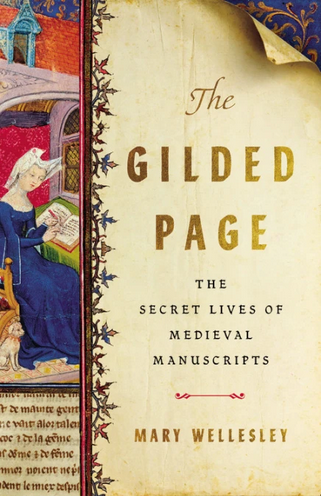 Before the proliferation of mechanical printing in 15th-century Europe, there were few means for disseminating the stuff of endemic culture. Folklore, preaching, and ecclesiastical art each reached largely illiterate populations in their own ways.

But among the lettered elites, “manuscript” texts, painstakingly duplicated by hand, were another medium of transmission, though effectively a monopoly dominated by religious and, to a lesser extent, political oligarchies. In The Gilded Page: The Secret Lives of Medieval Manuscripts, Mary Wellesley, focusing mainly on English and Northern European exemplars, highlights many of the hallmarks characterizing the intriguing realm of manuscripts.

Wellesley’s approach is at once erudite and evocative and studded with compelling revelations ranging from the everyday mechanics of the copyist’s materials, tools, and techniques to the eye-popping artistry of the leading illuminators who decorated the texts that have come down to us. These gifted miniaturists habitually filled every available space on a chosen page with brilliant, jewel-bright illustrations that call on the visual vocabulary of contemporary life in the castle, monastery, and village.

Although most of these artists were apparently male monks, there were also copyists and illuminators in service to royalty and nobility, and even a number of women. One such, an anonymous 11th-century female illuminator (illuminatrix?), was identified posthumously by a dogged historical pathologist who found telltale priceless chemicals in her dental plaque. The researcher posited that the long-dead artist had sucked absentmindedly on the tail end of her brush as she worked.

Given the demographics of today’s reading audience, it’s not surprising that Wellesley keeps an eye peeled for the manuscript tradition’s most gifted woman copyists, artists, and even the authors whose efforts have survived. A handful stand out in her saga.

It’s worth noting that we’ve recently met one of these singularly talented women in the Independent already: Marie de France, portrayed fictionally by Lauren Groff in Matrix. In her extended discussion of the historical Marie — nun, poetess, and fabulist — Wellesley reveals how Marie boldly asserted her place as author (“I am from France, my name’s Marie”) in one text and suggests that male copyists were not above blotting out hints of female authorship, as women were often thought incapable of such intellectual exertions. Marie’s self-assertion has clearly survived.

Other women resorted to similar paleographic subterfuge. An English copyist by the name of Hugeburc (circa 780 A.D.) squeezed a cleverly encrypted self-identification into the scant space between two texts. It was not decoded until 1931. She might have dumbed it down a bit, perhaps.

The women authors whose works survive in manuscript form come in all types, from 14th-century devotional mystic Julian of Norwich to the late-15th-century Welsh poet Gwerful Mechain, whose output ranged in theme from the religious and devotional to the worldly and sexual. Mechain’s best known work is “Ode to the Vagina,” whose English title tends to vary from translator to translator, admitting a few less bowdlerized alternatives from the daring among them.

In general, copyists and artists seem to have worked collectively, their efforts often extending for years on a given text. For example, the mid-12th-century Winchester Bible (so named because of its cathedral of origin) seems to have occupied its team of illustrators for 15 years and more.

In her selection of color plates, Wellesley includes two lustrous examples of the Winchester illuminators’ work, along with many other breathtakingly luminous samples from keystone monastic and secular manuscripts spanning seven centuries. These examples serve to underscore the expert, encyclopedic commentary the author provides.

Wellesley’s volume is both scholarly and engaging for the non-expert. And it reminds us how many of the most cherished works in our mother tongue’s literary culture — including the whole of Old English written history and six centuries of poetry (e.g., Beowulf and the works of Geoffrey Chaucer) — have reached us largely by happenstance, via manuscripts that have survived fires and errant copyists intent on putting their own imprint on the texts.

We can only speculate about the works of high artistry and historical interest that have not come down to us across the ages.

Bob Duffy, retired brand consultant and ad exec, is also a former habitué of Washington’s prominent rare books and manuscripts collections and an author of scholarly articles on 16th-century literature and drama.