Can our country’s dark past teach us anything about its dark present? 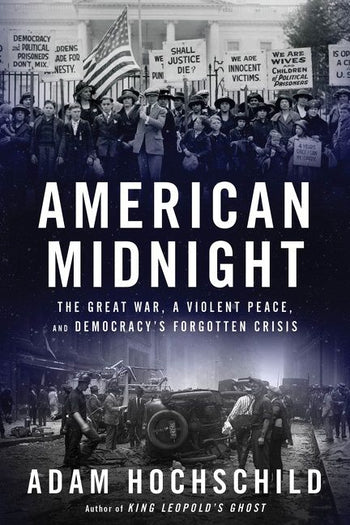 The title American Midnight: The Great War, a Violent Peace, and Democracy’s Forgotten Crisis promises to instruct us that the cruel distempers of our times have happened before and that, if we pay attention, we will learn important lessons. And author Adam Hochschild has written wonderful books about other midnights in human history, including King Leopold’s Ghost (European exploitation of the Congo) and Bury the Chains (fighting the transatlantic slave trade). So, yes, attention should be paid.

In American Midnight, the darkness extends from 1917 to 1921. In Hochschild’s telling, the United States plunges into the madness of World War I, emerges more violent and hate-filled, and then recovers its bearings.

Culprits are exposed and castigated, with President Woodrow Wilson at the top of the list. Close behind is a toxic partnership between an attorney general who would be president (A. Mitchell Palmer) and an amoral, media-savvy policeman (young J. Edgar Hoover). Vigilantism runs amok as mobs and the government target union activists, immigrants, dissenters against the war effort, socialists, and African Americans.

Hochschild has a sharp eye for personalities and moments. His renderings of radical firebrand Emma Goldman and socialist leader Kate Richards O’Hare are compelling and three-dimensional. The description of an evening when prison officials barred O’Hare’s teenaged son from playing his trumpet for his jailed mother is perfect. And the portrait of Wilson as fundamentally feckless and bored by public administration — even before his debilitating stroke in autumn 1919 — is disturbing and persuasive.

As a narrative of troubled times, American Midnight shines. Its ambition to instruct us, however, may be an ambition too great.

It is no matter of national pride that other eras have featured comparable darkness. Coordinated violence against labor organizers, the newly arrived, war resisters, minorities, and leftists has recurred far too often. Comparable episodes include the Know-Nothing movement of the 1850s; repression against war dissenters on both sides of the Civil War and during the Vietnam era; the Chinese Exclusion Act of 1882 and the internment of Japanese Americans during World War II; and intermittent “Red Scares” and union “massacres” and “wars” between the 1870s and the 1940s. Lamentably, public and private violence against African Americans and Native Americans has been nearly constant.

In American Midnight, the evil fevers afflicting the nation subside during the 1920 presidential election. Both Democrats and Republicans turn away from frontrunners promising more social anger and repression, choosing instead lightly known candidates of milder disposition: James Cox and Warren Harding. The affable Harding’s victory brings a few thieves into the White House but no crusaders against leftists or Black people. Why did the fevers break?

Hochschild stresses two episodes in 1920 when Attorney General Palmer’s brutal methods were criticized — by an obscure acting secretary of labor (Louis Post) and by a blue-ribbon panel of legal poohbahs (in today’s parlance, “elites”). Were those enough to transform the public mind and bring peace to the valley? Maybe, but there had been plenty of similar criticism before, which Hochschild describes. Perhaps Americans just grew weary of being angry.

Beyond the era covered by American Midnight is the disappointment that the 1920s proved to be no festival of brotherhood. The Ku Klux Klan flourished in many states, even electing a Klansman governor of Oklahoma. Lynchings continued at a steady pace. Federal courts and bureaucrats hammered labor when it dared to organize and strike. The Johnson-Reed Act of 1924, detailed by Hochschild, shut down much immigration for the next two generations.

So, what’s the lesson for today? How do we accelerate the end of such midnights, or even prevent them from happening? The takeaway may be that every period has its midnight, replete with angry populist movements and craven political leaders, and the people of that era must resolve to banish that darkness — or at least to wait it out.

David O. Stewart has written two historical novels set during the period of American Midnight (The Paris Deception and The Babe Ruth Deception) and five works of history.