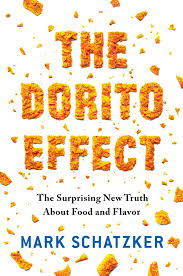 Your kitchen has become a crime scene. Your food is a fraud, pumped full of artificial chemicals, stripped of its natural nutrients and flavor.

Kale grown in the 1950s boasted twice as much riboflavin as this year's model; Ernest Hemingway’s cauliflower had double the thiamine as the stuff on your plate right now; and the asparagus Ike served at White House dinners provided almost three times as much vitamin C as that droopy, waterlogged stuff you tossed into the trash after your Memorial Day cookout.

And chicken? Don't get me started on chicken.

"So imagine for a moment an alternate world in which everyone is wearing flavor goggles," writes author Mark Schatzker in his depressing new book, The Dorito Effect. "When they bite into foods that taste like tacos, cherries, grapes, or oranges, their brains think they are actually eating tacos, cherries, grapes, or oranges. But what they are actually tasting are flavor chemicals."

This all sounds like stuff out of “The Matrix,” but, according to Schatzker, "That's the world you live in…Modern food may be the most compelling lie humans have ever told."

Much of our food is now about form over function. An example: Tomatoes are supposed to have patches and stripes of green. These "marks" of chlorophyll produce energy that powers the taste-making process. But over time the focus became more about appearance. Streaks are ugly. They look weird. So, by the 1950s, nearly all tomatoes found in the grocery store were a "factory-finish" red, Schatzker tells us.

It's not just about fruits and vegetables, though. Chicken is a prime example, and Julia Child was already alarmed by the then-nascent trend in 1961’s Mastering the Art of French Cooking. Chicken, she asserted, "should be so good in itself that it is an absolute delight to eat as a perfectly plain, butter roast, sauté or grill." Good luck finding that chicken outside a Whole Foods today.

Chicken's descent, our poster child for the dilution of America's food, began in Easton, Maryland, in 1948, when a few dozen chicks warily emerged from their shells. A national poultry distributor at A&P Food Stores came up with a "Chicken of Tomorrow" contest. The title alone should have scared people away; unfortunately, it set off a battle for the way to produce the cheapest chicken the fastest. Taste, not a metric that could be measured as such, wasn't even part of the competition. The Easton broiler won; the rest of us lost.

Back in 1923, it took 16 weeks to get a chicken even to its tiny "broiler" weight of just over two pounds. By 1943, broilers were typically three pounds and grown in about 14 weeks. The trend — cheaper, faster, bigger, blander — has increased to this day. As Schatzker puts it, "The Chicken of Tomorrow contest never really ended."

A modern chicken is basically a blank canvas. But instead of paint, we use "flavorings," a word bandied about in very loose terms by the huge industry that creates them. Making modern chickens taste good requires three rounds of seasoning that include the relatively normal garlic and oregano, as well as MSG or hydrolyzed yeast. But the real foundation is secret substances (proprietary potions) labeled "natural flavors" or "artificial flavors."

Schatzker notes there are other issues beyond corporate greed at work. It's a question of real estate. Put simply, there isn't enough land to feed North America's huge population without today's production techniques. The problem: While large swaths of our best farmland have been consumed by strip malls, houses, and the like, our continent's population has doubled since 1948.

The reality is that access to high-quality food has begun to resemble our country's economic structure: the haves at the top, and the have-lesses at the bottom, without many in-between. The relatively wealthy, particularly city dwellers, can access quality food that measures up to what Mom put on our table 50 years ago — but it's not cheap. What is cheap, and what most Americans can afford, are mediocre foodstuffs doused with plenty of tricks.

The book’s appendix offers more than a dozen ideas to help us get back to nature ("eat real flavor," "eat meat from pastured animals," "avoid synthetic flavor technology"). The ideas are probably sound, but the final tip is a naive call for Americans to simply "demand" higher-quality food.

Well, we can demand all we like, and some of us can dig deep into our wallets to pay for that honest chicken and streaked tomato, but all the demanding in the world doesn't do squat about our two biggest problems: too many people, not enough farmland.

Michael Causey is a past president of Washington Independent Writers. One of his favorite movies is “Soylent Green.”

George Marshall: Defender of the Republic