This accessible exploration of the science/religion conflict refuses to take sides in the debate. 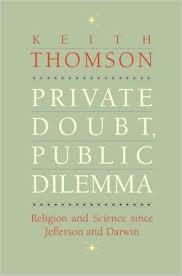 Does the world really need another book taking on the conflict between science and religion? Well, “need” may be debatable, but Keith Thomson brings a fresh perspective to this ongoing conversation.

Private Doubt, Public Dilemma is a set of essays forged from a 2012 lecture series supported by the Dwight Harrington Terry Foundation, which describes its mission as “the assimilation and interpretation of that which has been or shall be hereafter discovered, and its application to human welfare, especially by the building of the truths of science and philosophy into the structure of a broadened and purified relation.”

Given this mandate, it should surprise no one that the result is not the latest polemic in the culture wars, but a measured and thoughtful consideration of the ways people in recent centuries have tried to reconcile what science has revealed about the world with their religious scruples.

Thomson frames his topic as part of a larger human phenomenon: “[T]he science-religion predicament is but a small part of a much broader set of difficulties that arise wherever and whenever new knowledge is added to old.” The time period this book examines, from the Enlightenment through the late 19th century, was a time when scientific pursuits were adding tremendous and unprecedented amounts of new knowledge to humanity’s store of information.

Thomson looks first at conflicts between this new knowledge and individual people’s religious framework, taking as his subjects two key contributors to the growing scientific understanding and cultural response, Thomas Jefferson and Charles Darwin. He also steps back to look at the society around each man, as religious believers struggled to reconcile the tenets of their faith with the growing evidence of the age of the earth, the movement of the continents, and the gradual change of species over vast amounts of geologic time.

Several sections toward the middle of the book contain interesting historical explorations. These essays are not an attempt to pick winners and losers in a science vs. religion battle, but an explication of how ideas adapted (or didn’t) in the face of new information.

This approach is signaled early on with the task of providing definitions for the key terms religion and science. Thomson is not interested in pinning down a single definition of religion to argue for or against, but in setting out what people may mean when they talk about religion in their lives.

Numerous other authors in recent years have taken on the task of debating whether or not there is a God or if there is any truth to religion (or, for some, any truth without it). For Thomson, “If enough people believe there is a God and act on their beliefs, then that becomes a political fact that must be accommodated.”

It is from this perspective that Thomson ultimately suggests that proponents of both science and religion might be best served by finding areas where they can cooperate. Thomson rejects Stephen Jay Gould’s idea of “non-overlapping magisteria” as a means to reconcile competing claims of science and religion, in which he asserts that each has a sphere of interest that is wholly separate from the other.

Rather, Thomson acknowledges that conflict arises “precisely because there are many places where the magisterial, the claims of authority of science and religion, do in fact overlap, intersect, and compete with each other.”

The close correspondence between the publication of Private Doubt, Public Dilemma and the recent papal encyclical on global climate change is a happy coincidence. Pope Francis’ encyclical supports Thomson’s claims and highlights specifically how science and religion can work together to a common end.

By using his moral authority to support the importance of mitigating the worst of the human-caused damage to the environment and to pass a healthy planet on to future generations, Pope Francis illustrates one way that faith can draw inspiration and illumination from scientific fact, without ceding any ground of its own.

In light of the political reality of widespread religious faith, this kind of cooperation, as Thomson points out, likely reaps much more overall benefit to our species and the earth we live on than any polemic exploring arguments against the existence of a god or countering the truth of religious experience.

Not all readers will appreciate Thomson’s perspective in Private Doubt, Public Dilemma. Those looking for an author to pick a side in the conflict between science and religion will be disappointed. But for readers interested in a gentle exploration of how that conflict has played out and thoughtful suggestions for moving forward will find much to value in this volume.