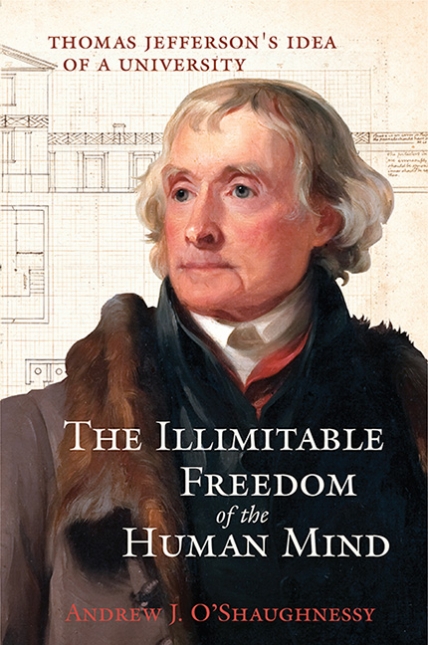 Thomas Jefferson chose just three of his many achievements to be engraved on his tombstone: not the presidency, not the Louisiana Purchase, not his crucial work as minister to France during the Revolution, and not even his invention of the rotating bookshelf. Rather, he opted to highlight his roles as author of both the Declaration of Independence and Virginia’s Statute for Religious Freedom and as founder of the University of Virginia.

These achievements are linked in The Illimitable Freedom of the Human Mind, Andrew J. O’Shaughnessy’s highly detailed and carefully constructed new history of the birth of UVA, to illustrate Jefferson’s belief that education was central to the democratic experiment.

O’Shaughnessy, a professor of history at UVA and vice president of the Thomas Jefferson Foundation at Monticello, is upfront in his introduction that this book is designed to commemorate the founding of UVA as one of Jefferson’s premier accomplishments. While he dutifully records the criticism that both Jefferson and “Jefferson’s University” have come under, he nonetheless celebrates its creation, providing impressive detail about Jefferson’s extensive involvement in every aspect of the project, from site selection and architecture to faculty recruitment and curriculum design.

Much of O’Shaughnessy’s narrative recounts the political battle for the university’s existence. While there was a good deal of support for public education in Virginia, the establishment of a campus in Charlottesville dedicated to Enlightenment ideals of inquiry was not guaranteed. The author gives a solid account of the fight Jefferson put up to build the campus near his home at Monticello: He joined the board of the Albemarle Academy (whose campus would form the core of UVA), encouraged friends to serve on the committee that chose the site for a university, supported friendly candidates for the general assembly, and wrote the bills that the assembly then passed authorizing the university’s charter and paying for its construction.

O’Shaughnessy is clear-eyed about the controversies that ensued, chronicling other — ultimately rejected — proposals that would’ve enabled greater state control over UVA, put more emphasis on public elementary education, and offered more opportunities for girls. Of course, the greatest controversies involved — as did everything in his life — Jefferson’s complicated relationship to slavery.

Much of the labor used to build the university came from enslaved people. Indeed, as his plans went over budget, Jefferson sometimes cut costs by choosing enslaved labor over free. And once UVA was open, a great deal of the work that went into running it — cleaning, cooking, serving meals, doing laundry, etc. — was performed by enslaved people. O’Shaughnessy points out that some of these laborers had once belonged to Jefferson himself. They were among the 120 enslaved people he had not freed upon his death.

While a good deal of information critical of Jefferson is included here, O’Shaughnessy isn’t interested in joining “the vogue of recent bicentennial histories that ascribe all characteristics of the University of Virginia to slavery.” Instead, he aims for what he calls “a more balanced and deeply contextualized approach,” and provides excellent context for UVA’s architecture, curriculum, budget, and library as compared to other Southern schools and many Northern ones, especially Yale and Harvard.

Particular attention is given to Jefferson’s disdain for organized religion; upon opening, UVA was the only university in America without a chapel. This is contrasted with the strong role religion played in the establishment of other colleges. When discussing architecture, O’Shaughnessy illustrates how Jefferson’s design was rooted in his ideas about how faculty and students should interact and contrasts it to more hierarchical cultures embodied at other universities. He even compares tuition rates.

And when O’Shaughnessy takes on UVA’s longstanding reputation for raucous and ill-disciplined students, he compares it to similar issues at Harvard at the time. This comparative context creates a fascinating portrait of higher education in America in the early 19th century. In 1818, for instance, Harvard expelled all 80 members of its unruly sophomore class.

At times, however, such comparisons give the impression that O’Shaughnessy is pulling his punches. Take his account of UVA’s most famous alum, Edgar Allan Poe. O’Shaughnessy records that Poe lived in an area already known — in the university’s first year — as “Rowdy Row.” Yet, he closes his account of Poe’s tenure by quoting a librarian describing Poe as “a sober, quiet and orderly young man” who was never seen “in the slightest degree under the influence of intoxicating liquors.”

Even if you didn’t know of The Tell-Tale Heart author’s reputation for alcoholism, O’Shaughnessy’s own account of how Poe’s drinking and gambling forced him to leave the university after less than a year calls the librarian’s puffery into question.

It’s not necessary to join any “vogue” movement in order to take stock of the effect of Jefferson’s peculiar relationship to slavery on his quest to build a university “not afraid to follow truth wherever it may lead, nor to tolerate any error so long as reason is left free to combat it.” And O’Shaughnessy doesn’t ignore the serious injustices perpetrated against enslaved people by Jefferson and UVA.

Yet while the author discusses the influence of some of Jefferson’s core beliefs on the creation of UVA — including his insistence on limiting religion’s reach and his radical ideas regarding faculty self-governance — Jefferson’s unwillingness to substantively address slavery isn’t put into broader context. What did it mean that the greatest university in the South had no abolitionist literature in its library?

We are also told that UVA alumni “accounted for a significant proportion of the leadership of the Confederacy,” but we get no insight into how the university’s teachings might have influenced those Confederate alumni during the secession crisis, Reconstruction, or at any point in the ongoing struggle to overcome the lingering effects of slavery.

These omissions will undoubtedly cause some to dismiss Andrew O’Shaughnessy’s work. That is a shame. While greater attention to the controversies and contradictions built into “Jefferson’s University” would have made The Illimitable Freedom of the Human Mind a more compelling read, there is much to value in this clear and informative contribution to Jefferson scholarship.

Kingdom of Lies: Unnerving Adventures in the World of Cybercrime

A befuddling, fragmentary plunge into the realm of computer criminals.