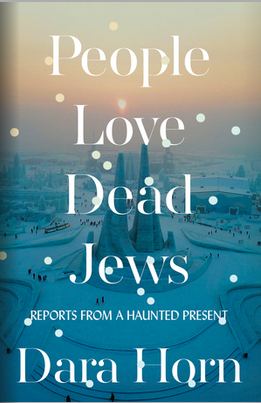 When I saw mention of Dara Horn’s People Love Dead Jews in the New York Times, I was revolted. But I was also curious enough to read the book, if only to understand what she meant by her provocative title. Her argument is that the “ways we commemorate antisemitism and Jewish tragedy distract from a more direct reckoning…The future was the present, which was essentially the past…People murdering Jews is a three-thousand-year-old global phenomenon.”

Horn’s evidence is overwhelming and scrupulously documented. She dealt with an idea I’ve thought about for nearly nine decades yet never saw from her perspective: Could it happen here? Horn demonstrates that it already has. Thus, she concludes:

“I had mistaken the enormous public contract in past Jewish suffering for a sign of respect for living Jews. I was very wrong.”

When I saw on TV recently masked, menacing men marching at the Lincoln Memorial, I was reminded of the 2017 torch rally in Charlottesville, Virginia, where racist marchers chanted, “Jews will not replace us!” As if we wanted to. The rise of international and domestic reports about defaced synagogues and Jewish cemeteries in San Diego, Boston, Pittsburgh, Los Angeles, Chicago, and elsewhere are signs that even in America, antisemitism is on people’s mind. Still.

Horn’s book makes a point I’d never heard made. She writes that she felt gaslighted by the notion that having an interest in Jewish suffering is somehow “a sign of respect for living Jews.” Concern over recent antisemitic atrocities in the U.S. has been deemed “a kind of piety,” along the order of putting a happy ending on bad times. “It couldn’t happen here” is the common conclusion reached by naïve Jews and decent Christians alike.

It’s the same delusion that was shared among “assimilated” Jews in Nazi Germany prior to the Holocaust. And by the 5,000 Czech Jews murdered and displaced in March 1944. And in Syria, a country, like Libya, now devoid of Jews.

Horn’s history of what happened to the large population of Siberian Jews in Harbin, China, is less well known but all the more interesting because of it. When Russia decided to build a railroad in 1896 — through isolated, rugged Manchuria — to connect Moscow to Vladivostok, a Russian Jew was put in charge. “Harbin was great for the Jews,” Horn writes, “until it wasn’t.” Both Russians and Japanese targeted Jewish businesses, sent influential Jews to gulags, and beheaded Jews. Harbin’s golden age for Jews lasted one generation and was “a rollercoaster of triumph and horror.”

What happened to Jews in World War II is, of course, a well-documented chapter in world history. But Horn tells of comparable Jewish slaughters that are less familiar. For instance, our WWII ally Stalin killed more Jews than Hitler did. Yet there were no Nuremburg trials in Russia.

Horn’s story of the rescuing of Jews in WWII by maverick American journalist Varian Fry is as much a lesson in heroism as it is a sad report on the United States’ refusal to save thousands of desperate European Jews attempting to find new homes here. “We knew plenty and could have done a lot,” she points out. Instead, Jews depended on humane oddballs like Fry, who is honored today as one of the Righteous Among the Nations at Yad Vashem in Israel.

I discuss the idea that “it couldn’t happen here” in a short story I’m writing called “The Book Club.” In light of Horn’s assertion that “the unspoken ways in which the popular obsession with dead Jews, even in its most apparently benign and civic-minded forms, is a profound affront to human dignity,” I’ll be making edits before it’s published in an upcoming collection.

My story discusses Anne Frank’s diary, which sold 30 million copies in 70 languages and is perhaps most famous for the line, “I still believe in spite of everything, people are truly good at heart,” which seems to give readers the happy ending so many of us expect and demand. Never mind the devastating reality that Frank was captured and taken to a concentration camp — where she later died — only three weeks after writing those words. The world wanted to see the legacy of her story, says Horn, not the tragedy.

Why? Because Frank’s words — minus the truth of what came after — allow us to “feel forgiven for those lapses of our civilization that allow for piles of murdered girls” by rewarding us with the hopeful words of this one murdered girl. Horn concludes abruptly: “Here’s how much some people disklike living Jews: they murdered 6 million of them.”

For decades, I represented the U.S. Holocaust Memorial Museum in Washington, DC, sold many of its books, and produced an award-winning TV documentary about it. At its opening, then President Bill Clinton introduced Elie Wiesel, the famed author and recorder of Holocaust subjects. Both dutifully intoned, “Never again.”

In reality, asserts Dara Horn, Jews are “loathed in life, and loved only when they are safely dead.” Her brilliant, eye-opening book doesn’t solve this problem, but pointing it out can be a beginning. Yiddish and Jewish literature, she writes, don’t have endings at all. An ominous observation.

Ronald Goldfarb is a Washington, DC, attorney, author, and literary agent. His newest book, with a foreword by Bernie Sanders, is The Price of Justice: Money, Morals and Ethical Reform in the Law.

Disfigured during combat in Vietnam, Robert Timberg transformed his life by becoming a distinguished journalist.