This book explores the social history of vaccination in the United States and reveals an underlying political agenda. 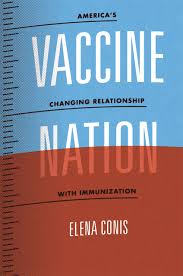 Elena Conis’ Vaccine Nation: America’s Changing Relationship with Immunization is a social history of vaccination in the United States. The book reviews the development of the current recommended vaccine schedule and examines the forces that shape public opinion regarding vaccination.

Conis begins with a discussion of the Kennedy Vaccination Assistance Act of 1962, examining the political motives behind the legislation and the historical timing — noting that at a press conference when the public was poised to hear Kennedy answer questions on communism and Soviet success in space exploration, they were surprised with an announcement about a national vaccination campaign against polio.

Throughout the book, Conis comes back to the idea that political agenda shapes what, when, and how vaccination and vaccine-preventable diseases are presented to the public. She delves into this with a discussion of President Jimmy Carter’s Childhood Immunization Program and then again with President Bill Clinton’s Vaccines for Children program.

Vaccine Nation explores the history of vaccinations and discusses the development of the MMR vaccine and how, when the vaccine was initially developed, measles, mumps, and rubella were considered “mild illnesses” compared with the devastating paralysis caused by polio. Conis also reveals that both doctors and patients initially saw no urgency in vaccinating against these “lesser diseases” (discussions that have been echoed in more recent years with the varicella and hepatitis A vaccines).

Conis’ discussion of how children came to be the main recipients of vaccines is an interesting  section of this book. Parents often question why their newborn should receive the hepatitis B vaccine when there is really minimal chance of their child contracting the disease. She reviews the history of how this came to be after a public health campaign targeting adults failed because so many adolescents and young adults do not receive regular preventative care.

She also discusses how the spread of disease among schoolchildren is a prominent force in many outbreaks, so that over the years, the age of children targeted for vaccination moved from school-age to preschoolers to infants to ensure the protection of the largest number of people. She then  reviews how this led to the development of school vaccination mandates, with both beneficial  effects for the public health and frustration on the part of many parents. In Conis’ opinion, “New vaccines create imperatives to vaccinate, largely by triggering the transformation of their target diseases into diseases in urgent need of prevention.”

She discusses the devastating effects that these same diseases can cause for the very young, the  elderly, and the immunocompromised, but suggests that the government and medical community use these instances as scare tactics to promote universal vaccination. She also touches on, but  largely dismisses, the lengthy cost-benefit analysis undertaken by public health officials when a new vaccine is considered for public use.

The book also examines some of the forces that led to the development of anti-vaccination sentiment. In the chapter “Tampering with Nature,” she reviews the effect of the rise of environmentalism and points out that parents became concerned with the “long term consequences of their children’s toxic exposures.”

Gender is another driving force in the vaccination controversy. Feminist perspective clashed with the paternalistic nature of medicine in the 1970s and 1980s, particularly with vaccine campaigns that claimed “it is a mother’s responsibility” to vaccinate. Conis evaluates how these type of campaigns backfired by alienating women.

Vaccine Nation contains an interesting discussion of the media’s place in the social history of  vaccination. Conis critiques the media for not providing a complete and accurate story, but she recognizes that the media functions in and reflects current social context.

She suggests that the media has fueled the vaccine and autism discussion long after it was refuted by scientists both because it makes for big headlines and because of a political agenda led by public health officials. She feels that these officials benefited from keeping the debate alive because it allowed them to downplay and ignore larger, less easily addressed concerns such as access to healthcare and disease outbreaks in spite of high vaccination rates.

Physicians, particularly pediatricians, who spend their life’s work advocating for children and promoting vaccination, will find this book frustratingly cynical, bordering on conspiracy theory. There is worth, though, in knowing the history of the current vaccine schedule and the political and cultural climate in which it was developed.

The book will appeal to anyone interested in the history of medicine, and it will resonate with those who see public health officials as benevolent dictators and feel that a democracy would be more appropriate.

Christine Macken is a general pediatrician in Fairfield County, Connecticut, who is passionately in favor of vaccination, both for individual and public health benefits.

There’s a lot to say about fish in Fornells.

The Crisis of the Middle-Class Constitution: Why Economic Inequality Threatens Our Republic

A law professor warns of looming danger from financial imbalance.