How to Leave: Quitting the City and Coping with a New Reality 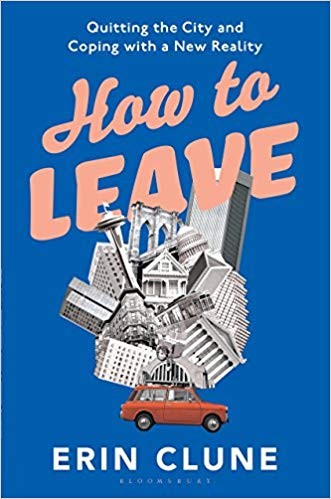 Part memoir, part self-help book, Erin Clune’s How to Leave, a humorous “practical coping guide,” chronicles her family’s move from her beloved New York City, where she had lived for two decades, to her hometown of Madison, Wisconsin, “a town so pleasant and livable” that she originally “couldn’t wait to get the hell out,” and it also offers nuggets of advice to readers who are contemplating similar moves.

Clune’s sarcastic, tongue-in-cheek humor targets New Yorkers and city dwellers, Wisconsinites and Midwesterners, and her own shifting attitudes and prejudices as she navigates this major life change.

“It’s even possible to love New York and hate it in the same day! One minute, you’re cruising up Amsterdam Avenue, humming a Beyoncé song, dreaming about a mushroom burger from Shake Shack. Momentarily, it starts to rain. Your humming is drowned out by a jackhammer at one of New York’s constant construction sites, and when you turn the corner to get in a line that stretches around the block, you step right into a pile of human-size shit. Two feet in front of you, you spot a junkie pulling up his pants.”

This sudden shift, Clune writes with her characteristic understatement, “just ruined your mood.”

What finally compels Clune to leave the city is motherhood. First, there’s the overcrowding that comes with squeezing not one but two children into a New York apartment. When the second arrives, Clune and her husband convert their second bathroom — by removing the sink, shower, and toilet — into a bedroom that can hold only a crib, forcing the “second kid to sleep in a moldy bathroom with one tiny window that looked out onto an air shaft coated in pigeon shit.”

There are other concerns. For example, in order to afford NYC life, Clune’s husband works 60 to 80 hours a week. “We had settled the work/life balance question by splitting it down the middle,” Clune writes. “He did the work. I did the life.”

Still, Clune’s family sticks it out for a few years, until her oldest child reaches school age. “But the ultimate tipping factor — the horrible Medusa that finally turned my uncertain heart to stone — was kindergarten.” Clune writes:

“Finding a private school in New York City is exactly like an Easter egg hunt. Except instead of five thousand ambitious, competitive, high-strung people trampling your children to death in order to get their hands on a plastic egg with a stale Hershey’s kiss inside, there are fifty thousand people with sharp elbows trying to get their kids into Harvard fourteen years early. Wealthy elites in Manhattan can be very nice people. But get in their way on a kindergarten tour and they will stab you in the neck with a jumbo crayon and stuff your bloody cadaver into the painting smock cabinet without ever looking back.”

The family makes a commitment to moving, and after considering several locations, settles on Madison — a place with a lower cost of living and Clune’s family nearby. Once the family has relocated, however, life isn’t all smooth sailing.

In her early days back in Madison, taking care of her two young children while her husband works, Clune feels all alone, not realizing that other people are having similar experiences all over the country: “Why didn’t I know that the emotional toll of moving was so universal? Although people move to different places, for myriad reasons, the overall narrative is remarkably common.”

There is much to love about life in New York City, according to Clune, and there is much to disparage about life in provincial Madison. What saves her from complete East Coast snobbery is that, first of all, Clune is originally from Madison, so her New York attitudes were largely acquired in adulthood, making it possible for her to empathize — occasionally — with the Midwestern worldview.

And, second, she is self-deprecating about all of her identities, including the urbane New Yorker that she was for two decades and the helicopter parent that she has recently become. She pokes nearly as much fun at big-city priorities and lifestyles as she does at the slow pace of life in Madison and the prudishness of Wisconsinites.

After her return to Madison, Clune discovers that her decorous and uptight neighbors make reference to the “f-bomb,” a term that Clune has never heard because, in New York, it’s dropped left and right. But in Wisconsin, the word “is so unacceptable in public” that “if you do accidentally let it slip out, you can only describe it later by likening it to an explosive deadly weapon.”

Nothing escapes Clune’s sharp sarcasm: She mocks the dark-sky ordinance that makes Madison akin to Mirkwood, the overly cautious behavior of “grown-ass” men carrying safety flags in crosswalks, and the depressing ubiquity of Target stores. She also ridicules Wisconsin cuisine, “in which the three main food groups are cheese, meat, and fat,” adding, “If you hate pie, do not move to Wisconsin.”

Under her sardonic façade, though, Clune occasionally reveals her vulnerability. “I was also sad because in New York, being sad felt much more normal,” she writes. “Weeping on the Q train because New York is the best city on earth just means you have a soul. But weeping at Target in front of a woman who is there to buy weed killer and enjoy a venti caramel latte is just coastal white girl nonsense.”

Eventually, though, Clune finds a way to cry in public: “I just point my face toward a drunk person. Nine times out of ten, there’s one nearby, and they assume I’m just upset about the Green Bay Packers.”

The story is specific to Clune, but it has universal elements: It’s a book about leaving a place and going to another, about leaving home and finding it again. An easy read, the book is mostly lighthearted, a series of amusing anecdotes, but there are a couple of moments of greater depth when Clune tries to offer up real advice.

She recounts the stages of culture shock — Honeymoon, Judgment, Adjustment, and Mastery:

“You can live in your local culture but not be entirely of it. The Mastery Phase — also called biculturalism — is a process of figuring out which aspects of your new culture you want to adopt and which you don’t.”

In the end, Clune recognizes that she will hold onto her identity: “I’m always going to be an irreverent, sarcastic person who discloses my feelings and bucks the system a little bit. I just am. That’s why I love New York.”

The most profound lesson that Clune offers readers is that in leaving a place, you can never leave yourself behind: “When I left New York, I didn’t just bring my cool handbags and sarcastic attitude. I also brought my problems. This is an important tidbit of truth, Reader, which should be scrutinized when you figure out how to leave and where to go. The flip side of being yourself no matter where you live is that you are also stuck with yourself no matter where you live.”

Ultimately, the book is a light and frothy read — appropriate, perhaps, for passing the time on the subway while contemplating another life in another place.