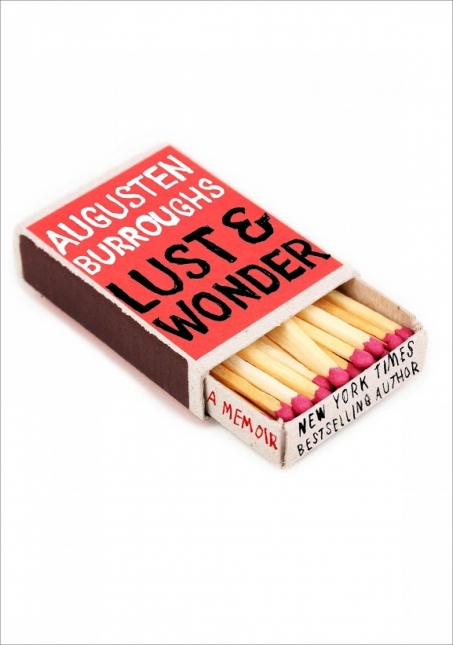 “How many of the things I fear or dread are actually things I want?” asks Augusten Burroughs in his latest memoir, Lust & Wonder.

This insight, 15 years in the making, comes to Burroughs after an Adderall-induced moment of clarity forces him to change his life. Part love odyssey, part wisdom writing, part cautionary tale, Burroughs’ intimate narrative blends hilarity with the naked shock of self-assessment.

Burroughs lands a date with his favorite author, Mitch. But shortly thereafter, their sex life falls off the rails because Burroughs can’t perform. In the name of “science,” he conducts an infidelity experiment to see if he can sleep with other men. He can. But it’s not until a much-needed therapy session that we learn that George, Burroughs’ long-lost love, is the real reason he can’t sleep with Mitch. George, however, is dying of AIDS — a disease that terrifies Burroughs.

After George passes away and Burroughs’ relationship with Mitch deteriorates, Burroughs resorts to drinking and general self-destruction. Without any support, he manages to pull himself back from the brink by writing a book and signing with the one and only literary agent who will have him: gorgeous, kind-hearted, ray-of-sunshine Christopher. Burroughs is instantly in love; Christopher is HIV-positive.

The book’s main thrust is Burroughs convincing himself not to love Christopher in order to avoid the pain of losing him to the disease he so fears. He succeeds for 10 years by following his old pattern of settling for a safe, ill-fitted union with a new partner, Dennis. It’s a relationship Burroughs describes as “a heavy-lidded state of love and unspeakable compromise.”

Does Burroughs end up with Christopher? I’ll never tell. However, Burroughs will drag himself to sobriety (again) and face a shopping addiction. He’ll also become an adept dream-interrupter.

Lust & Wonder is the 10th book from Burroughs in just 16 years. Several of his other works, including Running with Scissors (2002), A Wolf at the Table (2008), and You Better Not Cry (2009), are memoirs comically styled in an arena where he wrestles with a painful and highly unorthodox childhood. While Lust & Wonder takes on his adult years, Burroughs’ past is ever-present: a tender, wet-lashed spot on the periphery of the narrative.

“My childhood had been hijacked by drunks, pedophiles, lunatics and surrealists, so I grew up in a world unrelated to the actual planetary body beneath my feet.”

Equally moving is his coverage of the September 11th terrorist attacks, which Burroughs witnesses in person, as well as of the grim legacy vis-a-vis George of the stunning AIDS tidal wave that swept through 1980s New York, laying waste to a generation of profound talent.

Of course, the best tributes to New York, which Burroughs moved away from, will make you laugh: “I wasn’t ever planning on leaving the house, anyway, since I hated small towns and nature and political correctness and pretty much everything that wasn’t New York City where, it was beginning to sink in, I actually no longer lived.”

At times, the narrative falls short, such as when Burroughs tells the story of how George contracted AIDS. As George’s former partner dies of the disease, George, at the time still HIV-negative, becomes infected. Burroughs dodges here, suggesting merely that there was a lot of blood during the death, an explanation strikingly vague and unlikely. He might have been aiming at preserving privacy, but privacy is a memoir’s kryptonite.

Similarly unsatisfying is a scene where Burroughs recalls being at a café as a child, ignored by his mother. A lady approaches and offers him a piece of jewelry. This moment, which he uses to explain his lifelong fascination with precious gemstones, comes off as a tidy explanation for something surely more subterranean and complex.

On the other hand, most of the memoir is deliciously candid and greets readers at the corner of self-knowledge and wit: “I had never before considered the possibility that I might never even want a drink yet still be left with this horrible, throbbing vacancy in the center of my being, right where my mental health and contentment were supposed to be.”

I enjoyed taking this funny, psychological jaunt with this once-vulnerable man. Hardened by what he describes as “a garbage dump of life,” Burroughs reaches within and beyond and, in doing so, dares to be vulnerable again.

Dorothy Reno is a short-story writer and book critic.